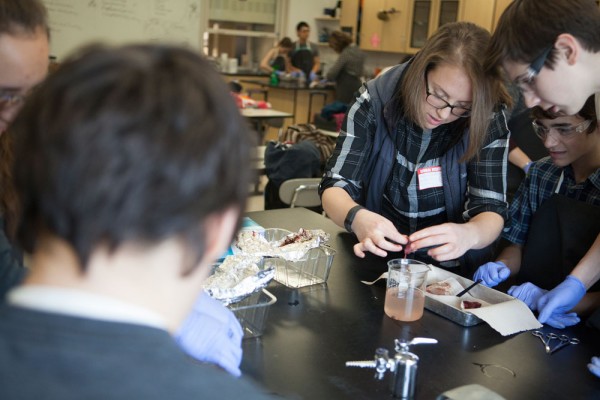 "If only animals could talk," said Veronica Padula, a UAA graduate student researching seabird decline in the Aleutian Islands, "then they could tell us what's wrong with them."

Instead, Padula and ecology professor Douglas Causey must take the long path to an answer-research that involves lengthy and stormy boat treks through the Aleutian archipelago right to its very tip, the Near Islands (so called because of how close they are to Russia). 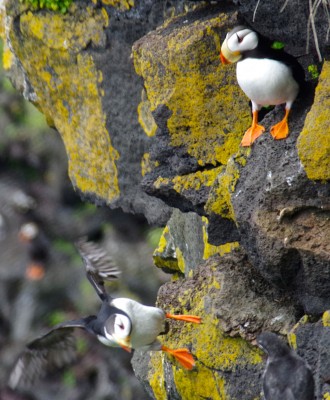 "This is out in the middle of nowhere," said Causey, who has studied seabirds for 30 years. He and Padula see a precipitous drop in bird populations, "dramatically different than anywhere else in the Aleutians." A census of Red-faced cormorants tallied 40,000 birds in the 1970s, Causey said. "Last summer, I don't think we saw 300."

Like detectives, Causey and Padula are investigating why. Padula took a snapshot of their research to a marine biology class at Polaris K-12 on Friday, where high school students donned safety glasses and scalpels for some hands-on forensics.

One potential reason for their plummet may be a less-nourishing ocean, warmed by The Blob, a large mass of warmer-than-normal water in the Pacific Ocean off the coast of North American. One of its three sections hugs Alaska into the Bering Sea.

A thick-billed murre on an egg. Murre eggs are harvested on St. Paul Island. Since scientists have sequestered phthalates in embryos, the next step is analyzing the eggs for phthalate concentrations. (Photo by Veronica Padula/UAA)

Another reason may be ocean currents carrying food sources farther away from birds, which are periodically tethered to land when they lay eggs. This forces seabirds to burn more energy searching for calories and spend less time on the nest, both pressures on their survival.

Which brings us back to the classroom at Polaris.

A student enticed Padula here. Sophomore Sofia Astaburuaga owed a report in her marine biology class. The 15-year-old is passionate about environmentalism, volunteering since eighth grade with Alaska Youth for Environmental Action.

Last summer, she and Padula met through a zany connection in a Zumba class that Padula teaches at The Dome. The teen and her mom take the class while waiting for a little brother to finish soccer. A few conversations later, Sofia discovered Padula's academic field and their shared interest in environmental stewardship. Padula invited Sofia into the lab at UAA to help with bird dissections last summer.

Today, Sofia returned the favor. First she delivered her own PowerPoint, a snapshot of the collision between seabirds and plastic particles floating in and on their dinner plate-the sea. Then she introduced guest speaker Padula with her two dozen bird stomachs, ready for inspection by the high school students.

Padula loves teaching kids and knows how to snag the attention of teenage boys. 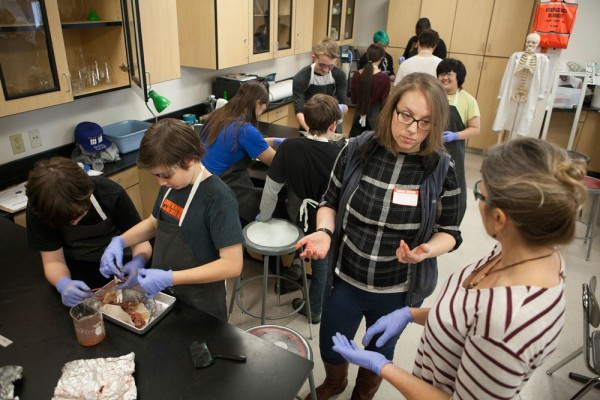 "There's a reason why you might not want to take another drink out of that plastic water bottle," she says to a boy in the back row. She explains how chemicals called phthalates are used to make plastic more flexible. Since they are applied on top of plastic, they come off and are easily absorbed by the body.

"They are what we call endocrine disrupters," Padula says. "Do you know what your endocrine system does for you?"

"Hormones," a boy says in a low voice.

"Exactly," says Padula. "Basically, these chemicals are going to mess with your hormones. And a lot of them are feminizing compounds. So guys, do you want feminizing chemicals in your body?"

Ew! --the class erupts in twitters and low murmurs.

"And what happens to you when you get these feminizing compounds in your body?"

Suddenly the bird stomachs and what might be in them got even more interesting.

The trouble with plastics

The class progressed as Padula walked her crew through opening the stomachs and washing the contents into a beaker of water. Sure enough, one team, Ethan Eakon and lab partner Lizeth Ballo, found a tiny fluorescent plastic bead about the size of a BB. Another team isolated a tiny gray pebble of plastic. Both ended up in stoppered glass tubes for Padula's further research. 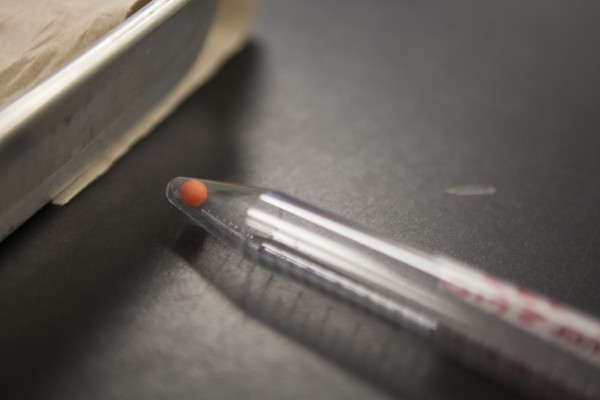 A clear vial holds the orange pellet one team foudn in a seabird belly. (Photo by Philip Hall/UAA)

There are two problems with plastic showing up in bird stomachs. First, it fails to get digested and fills up the stomach. Eventually no more food can fit, and birds die of starvation.

But there is new disturbing evidence. Padula and Causey have found chemical traces in bird embryos, a tide-turning finding that upends an assumption that phthalates are easily eliminated through urination. "Not only are they retained," Causey said, "but they are metabolized."

This brings new questions. How toxic are they? What are safe levels? Exactly how are they metabolized?

Window into health of the environment

Unlike rats and mice, birds are not models for human physiology. "They won't tell us anything about human health," said Causey. "But they will tell us something about environmental health."

Which explains Padula's mixed answer in class at Polaris when I said, on behalf of the students' experience, "I'm so glad they found some plastic."

A version of this story by Kathleen McCoy appeared in the Alaska Dispatch News on Sunday, Oct. 4, 2015.