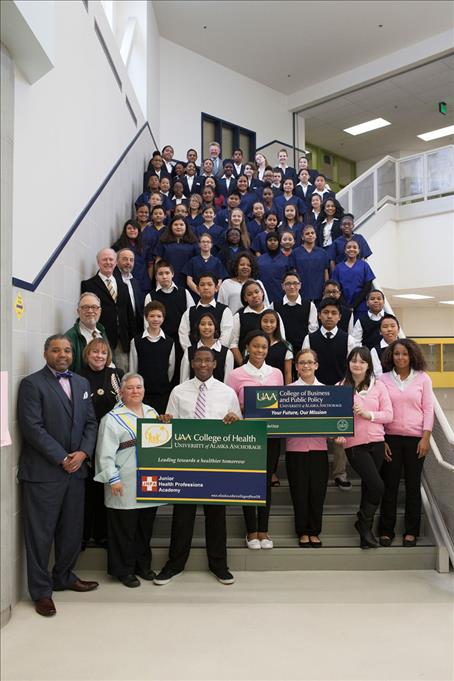 Back when she was a middle-school honor student in Little Rock, Ark., Terry Nelson hoped someday to attend college. So, when she reached 10th grade, Nelson took the ACT exam-but fell short of the benchmark score needed to qualify for college scholarships.

"My parents should have said, 'Why don't you study and take it again?" Nelson said. "I only missed it by three points, without studying. Just think if I had studied! But my family didn't know." 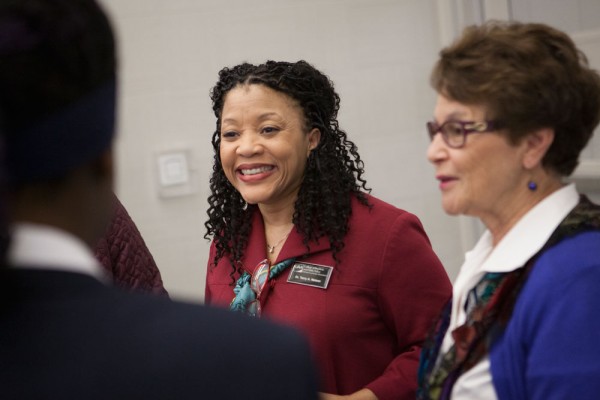 Terry Nelson, left, is a prime mover behind the Leadership Fellows Juniors Program. Judith Owens-Manley of the Center for Community Engagement and Learning stands by.

Nelson's parents hadn't attended college; they didn't have the academic experience to guide their daughter toward her goal. And people at Nelson's school in Little Rock, Ark., didn't provide suggestions or additional help, she said.

"At the time I was in school, first grade was the first year they integrated the elementary schools," Nelson  said. "There wasn't much support."

Through the Leadership Fellows Juniors program, Nelson is reaching out to help seventh- and eighth-graders at Clark Middle School develop the knowledge and skills they'll need to grow a healthy career in college and build a strong foundation for their professional careers. Clark, the most diverse middle school in the nation, has a high percentage of students who come from lower-income families, with many having parents who either didn't attend or didn't finish college.

"I was a child of that age and I didn't have anybody that had ever gone to college," Nelson said. "I knew I needed to go to college, but I didn't know anything about it."

The college-level Leadership Fellows Program that Nelson directs pairs UAA College of Business and Public Policy (CBPP) students with mentors in the Anchorage business community. Cessilye Williams, a UAA alumna and longtime principal of Clark Middle School, inspired Nelson to develop a similar program to provide Clark students with innovative educational opportunities and help them establish a framework for successfully applying to college. 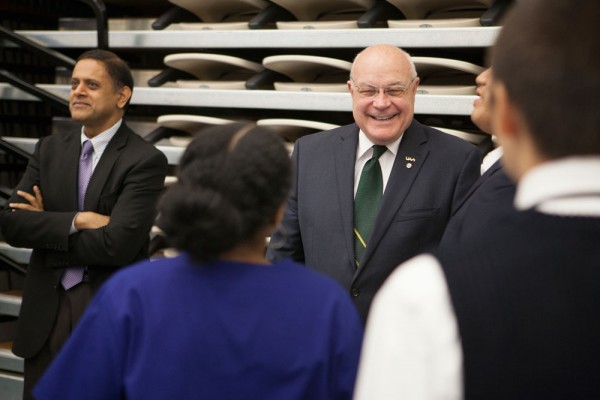 "The program is designed to develop and nurture a leadership mindset that will encourage young leaders to attend and succeed in college, apply for scholarships, excel in the work environment and become productive citizens in their communities," a project overview states.

The  two women, in December 2014, designed the first Leadership Fellows Juniors program and launched it the following month with an inaugural class of 17 students and an $850 grant from the UAA Center for Community Engagement and Learning. The students-mentored by CBPP faculty, UAA staff and the CBPP Leadership Fellows-attended six two-hour leadership-building skill classes, documented their reflections in an e-portfolio and completed an "Empty Bowls" community-engagement project during the spring semester. The first class of Juniors graduated April 17, alongside the CBPP Fellows, at CBPP's Student Celebration.

Nelson and Williams introduced the second Leadership Fellows Juniors cohort last weekend. Additional colleges at UAA have joined the effort, including the College of Education, College of Health and the Information Systems and Decision Sciences Department's ".coders" program in CBPP. Together they will formalize "Distinguished Leadership Academies." 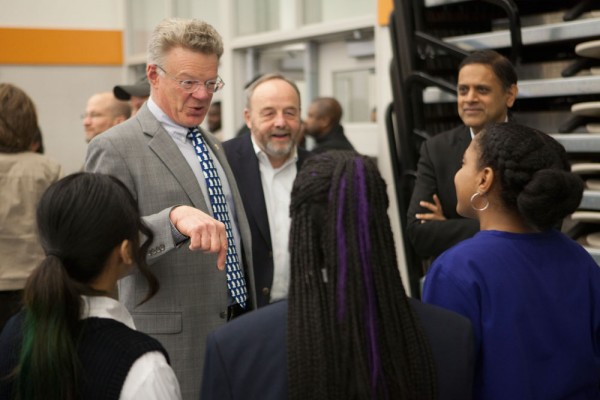 Business professor Frank Jeffries talks with junior Leadership Fellows at Clark Middle School on Oct. 3, 2015. In the background, other UAA leaders join in, including Provost Sam Gingerich and CBPP Dean Rashmi Prasad. (All photos on this page by Philip Hall/ UAA)

More than 80 youths are taking part in these academies, which will feature 2.5-hour Saturday sessions beginning now and ending in April with a mini-conference.

"We're giving these students an opportunity to have some insight as to what we offer in college, to hopefully get them inspired to go to college-most of them already are," Nelson said. "They get a taste of what to expect in the college world."

'You learn how to use your talents'

Julian Rivera-Brown was a Clark Middle School eighth-grader when Williams offered him the chance to participate in the Leadership Fellows Juniors program she and Nelson were bringing to life. He eagerly accepted the opportunity.

"The [Leadership Fellows Juniors] program gave me new perspectives of what's acceptable in social settings, how you should state your information, how you should lead, what makes a leader," he said. "Leaders are not all the same-some are traditional, some are relating." 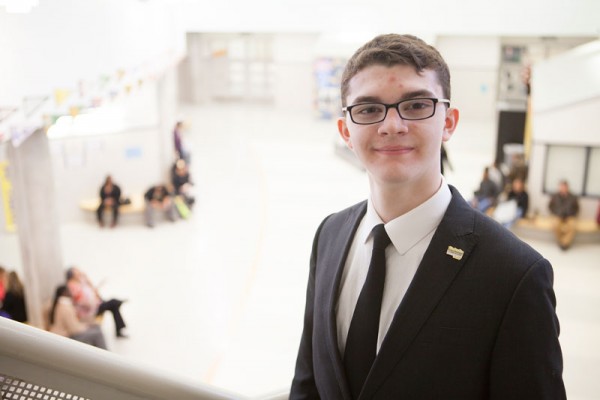 Of his Leadership Fellows Juniors opportunity, Julian Rivera-Brown says, "You learn how to use your talents and project yourself as a leader."

While at Clark, Julian served as an active member of the school's Informers, a group whose members honed their public speaking skills at school, before the school board, at the veterans' hospital and in a variety of other community settings.

Julian thrived in school, and grew to admire people like Michael Faraday, a 19th-century scientist who grew up in a very poor family: His sick father couldn't work, so Faraday worked for a bookbinder and, after work, spent his free time reading books he had bound. Faraday delved into chemistry and later discovered electromagnetic induction, diamagnetism and electrolysis.

"He worked his way up from the lower class," Julian said of Faraday. "He didn't really have any education, he only knew the simplest form of algebra but made important discoveries. If he could do that, so could I. I like learning about political science and personal psychology-what makes you you. I'm interested in ancient and medieval history, and plan to work in the United Nations as a career."

"This program, it's just wonderful," Julian said. "Everything it teaches you, all of it, is beneficial. Discovering how people see you makes you more self conscious, but in a good way. If you're shy at the beginning, it will help you open up more. It will give you confidence, and confidence is key to many things. If you view yourself as a leader, this will do a lot for you."