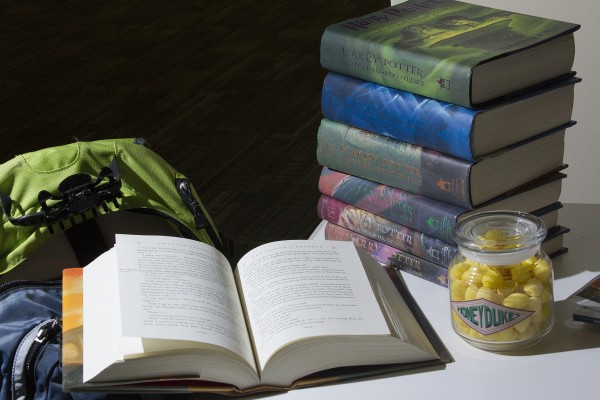 A jar of lemon drops from the famous Honeydukes candy shop in Hogsmeade provides the perfect study snack while poring through the seven-book Harry Potter series. (Photo by Philip Hall / University of Alaska Anchorage)

Alas, the Admin Building is no comparison to the stone halls of Hogwarts. But despite relying on fluorescent bulbs over wall-mounted torches, there's still a magical energy in the classroom. It's 8:30 a.m. on a Monday morning and dozens of students are shooting their hands in the air to answer their professor's prompts. It's as though they're under the spell of an early-morning enthusiasm charm.

Any fan of the Harry Potter books knows Hermione Granger's reputation in class. Now, imagine an entire classroom of high-energy, well-researched Hermione Grangers and you get a sense of ENGL 429, an upper-level English course solely built around J.K. Rowling's world-famous septet. Dr. Toby Widdicombe presides over the class of nearly 40 Potterphiles, and after every question he poses-whether it's on narrative structure or the personhood of centaurs-students shoot their hands in the air, eager to share their thoughts on Harry and the army of characters that populate the books.

But unlike, say, Professor Snape, who openly referred to Hermione as an "insufferable know-it-all," Widdicombe is more than happy to have his students constantly chiming in. "I can't shut my students up," he laughed. "It's wonderful."

ENGL 429 is listed as Major Authors, providing an avenue for English professors to shape an entire 15-week course around the works of one noteworthy author. Widdicombe-who has twice taught this course on J. R. R. Tolkien-seems like the perfect professor to lead a class on Potter. The son of two academics, he attended a 600-year-old prep school in England where his eccentric professors (called masters) dressed in long flowing robes. "It was exactly like Hogwarts, without the magic. It was truly weird," he recalled.

Here in Anchorage, he's inserted a few elements of Hogwarts into his classroom (no, he doesn't wear robes, though some students do sport Harry Potter T-shirts). On the first day of class, a random draw from a "sorting hat" assigned students to the four houses of Hogwarts. These houses worked together on group presentations, and also earned house points throughout the semester. Individually, students with perfect quiz scores earned the rank of prefect; the student with the highest cumulative quiz score overall earned the rank of head boy or head girl. "I thought no one would get 10 points each quiz. These kids have been getting 10 points all the time; it's amazing," said Widdicombe, who plans to bring a house cup and other awards to the final exam.

Making a case for Rowling

J.K. Rowling may be a contemporary writer, but this class proves she's a powerful-and popular-selection for the Major Authors course. Of note, during the November snowstorm, one student from the Valley left home at 5 a.m. so she could be in the classroom in time.

"The class is almost completely discussion," said senior English major Kara Griffith. "It's really great just talking about what happened in the book and why it happened." Each class, Widdicombe presides over the class, guiding the conversation as it ricochets from themes of good and evil to race and gender, shame, pity, personhood and power in the wizarding world. In addition to the seven books-measuring a mighty 4,200 pages-students also read four theory texts covering politics, philosophy and fantasy as framed by the series.

"In addition to the theory, we're looking at this book from a narratological perspective, or basically the study of how a story is put together," Widdicombe added. Considering the format remains unchanged in nearly every book-start at Privet Drive, end up at Hogwarts, scenes swirl towards the climax-Rowling still builds seven individual narratives plus a larger arc that spans the series, without boring the audience. "She has some very interesting strategies to make sure the audience comes upon the unexpected, and yet at the same time gets a sense of pleasure from seeing these same characters again," Widdicombe explained.

For one, the stories progress with the readers; as the characters mature, so do the readers and so do the themes. "I think part of the delight is [the septet] starts out quite humorously, and it ends up being quite a dark series," Widdicombe noted. "Just as children become more able to deal with dark subjects as they get older, the novels track that as well. It's a brilliant piece of writing because it so clearly attracts readers as the series goes on."

Every student in class will admit they're hooked on these books, but senior English major Miranda Forner has enjoyed the theory texts as well. She credits the supplemental works with adding context and structure for her own writing interests, especially in terms of crafting young characters. "[The class] certainly helped me figure out how my creative writing is influenced by the view I have now, versus the views I had at that age," she said, adding that Harry shifted from a single-minded youth to an empathetic leader as the series progressed. "I liked that painting of the teenage world," she said. Miranda plans to earn a graduate degree in English, creative writing or library science, but whatever path she chooses, Harry Potter will play a part in her future studies.

English senior Lindsay Windel also hopes to research Harry Potter after graduating, saying Widdicombe's enthusiasm has opened her eyes to Harry Potter as a graduate research topic. "There's a plethora on Tolkien, but there's not so much on Harry Potter. The way he set up our portfolio project allowed seniors who are planning to go on to a master's program to cultivate the foundations for our thesis and publishing." Compared to Tolkien, Lindsay points out that Rowling's series "is newer, and it's also a larger body of work. There is opportunity here [for research]."

Like many people around the world, Widdicombe's students clearly can't get enough of Harry Potter. "It's been a great time for me, and they're certainly enjoying themselves," he said of the course.

Every class is a sizzling debate among students firing out well-researched anecdotes and displaying scarily good memories for side characters and details.

"They're learning a lot," he added. "They're getting very good at not just seeing what's happening in the novels, but thinking about how things happen and what are the strength and weaknesses of J.K. Rowling as a writer.

"They came into class as big fans-and they still are-but they're getting a much more nuanced view."

"Harry Potter and the 400-level English class" is licensed under a Creative Commons Attribution-NonCommercial 4.0 International License.