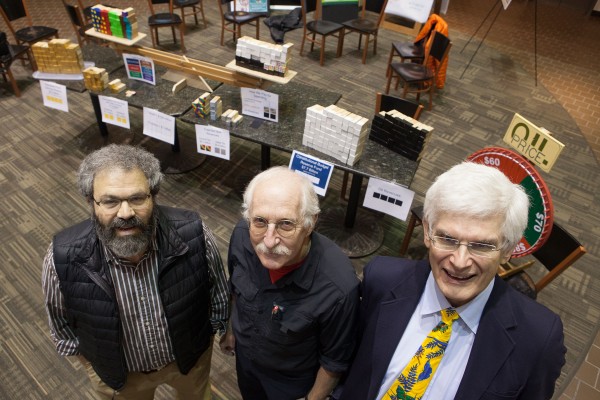 When you ponder Alaska's future-declining oil production and prices, budget cuts as far as the eye can see, another contentious legislative session beginning later this month-do you sense a wave of disaster fatigue?

"That's one of the problems," says Cliff Groh, chair of Alaska Common Ground, a non-partisan public policy group that hosts information sessions on key issues facing the state. Right now, our trouble is the sinking economy, if only folks would notice. "People have heard reports about the wolf-at-the-door for so long, they don't really believe it."

Three of the five-a fiscal-policy S.W.A.T. team if there ever was one-showed up at UAA's Administration Building Jan. 4, the first day campus reopened for spring semester.

Students weren't due back for a week, so the building lobby was oddly quiet. Undeterred, the trio quickly pulled together empty tables and set up their "Alaska Economy Game," loaded with an oil-price roulette wheel, a giant scale for balancing the budget, and wooden blocks representing state economic assets-everything from savings to oil income, to cigarette and alcohol taxes, to fish license fees and fuel taxes; even prospective income from marijuana sales. 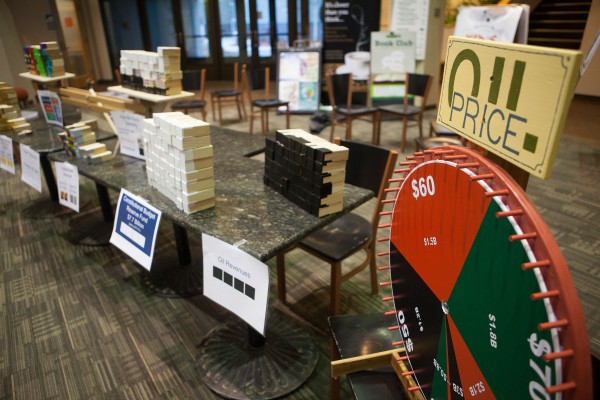 The colorful, handmade game on display in the lobby was a way to advertise a one-credit crash course on Alaska's economy, offered through the College of Business and Public Policy Feb. 26-27. The Legislature will be back in session a few weeks by the time the Friday night/all-day-Saturday class convenes, called "Navigating Alaska's Fiscal and Economic Challenges." Instructors include Groh, Goldsmith, Knapp and Sheila Selkregg.

Loeffler who calls himself the game's "roadie," will likely be enticed into the classroom as well. All of them have taken the state economy game on the road to explain the budget hole, from Soldotna to Fairbanks, from West High to Juneau. "We used to have Vanna White," Groh joked, "but after they cut the film tax subsidy, we got Bob."

Anyone interested in the class will need to register and pay tuition. If space is available, a senior citizen tuition waiver will be available the first day of class.

As Loeffler and Goldsmith assembled the game, Groh ran through some of his teaching points. He confessed that talking about Alaska's economy in earshot of Goldsmith felt a little like "walking into the Sistine Chapel and giving Mr. Michelangelo tips on painting."

Alaska is in a $3.5 billion fiscal hole, which gets deeper every single day. Imagine you could fill it by jacking up oil prices. If you had 12 months, every barrel would have to earn $109, Groh says, but since the fiscal year is already half over, the barrel price would have to leap over $140. Right now, oil is running about $34 per barrel.

"I'm not betting on those solutions," Groh says. "All the options for dealing with this hole will cause pain." 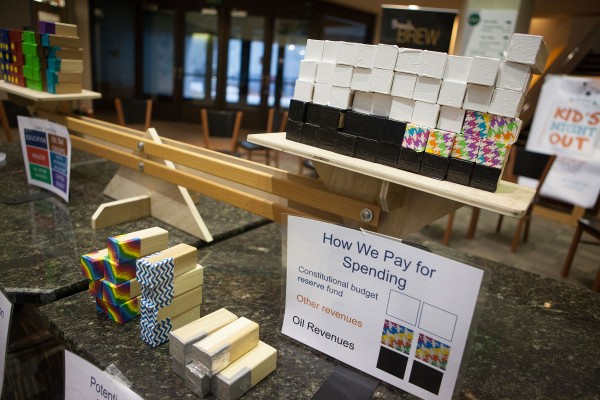 While that sounds grim, Groh delivers his lessons with humor and a smile. "I've been a lawyer, so I am used to bad news," he says. "I can deliver grim in a very upbeat manner." In fact, he's sunny enough to schedule two 7 a.m. breakfast meetings at the Denny's across from the Sears Mall on Jan. 13 and Jan. 20 to talk even more about the state budget.

After the economy game was set up, all three sat for a few minutes and considered the fix Alaska is in.

Goldsmith had just delivered a mid-December talk to Commonwealth North's Fiscal Policy Study Group. It was filled with the emeritus economist's own brand of humor: He labeled some ideas for closing the fiscal gap "zombie solutions." The living dead notions are ideas people keep talking about that have never worked. "Geez, you should diversify the economy," Goldsmith quipped, "or sell off some land...zombie solutions."

His "nickel-and-dime ideas," not enough to dig the state out of its deep hole, include casinos or a lottery, a marijuana tax, higher tourism, gas, alcohol or tobacco taxes, or even bringing back Alaska's old school tax.

Groh says, "People just want to hammer the tourists, hammer the oil companies, hammer the marijuana smokers, hammer the international gamblers. They want a painless solution." But it isn't that easy.

Goldsmith is ready to talk solutions. He's blunt: "The Legislature has to act this year."

Using Permanent Fund earnings is by far the most attractive, he says, because it gets the state the furthest toward a solution and causes the least damage to the economy.

"This is new territory," Goldsmith says. "There is not another state in the country that bases its fiscal structure on a draw from a financial account. We don't want to screw this up. If we waste it or use it up, then there's nothing after that."

A version of this story by Kathleen McCoy appeared in the Alaska Dispatch News on Sunday, Jan. 10. 2015.