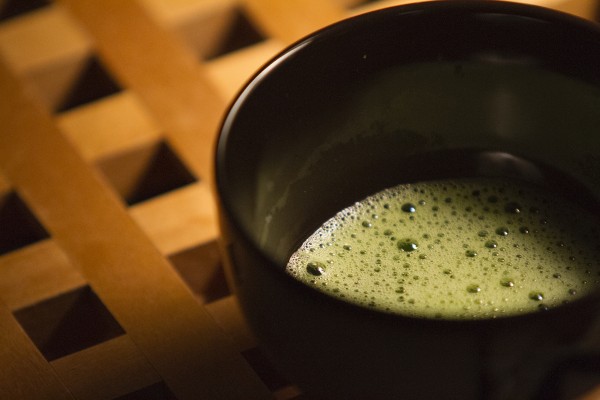 UAA's "Way of the Tea Ceremony" course, offered every year since 2007, moved into a new dedicated space in the Social Sciences Building last semester. (Photo by Philip Hall / University of Alaska Anchorage)

Floor lamps cast a soft light over the warm bowls of frothy tea. Pink cherry blossoms rest in vases under a large red paper parasol; it's the most prominent piece of furniture, as the guests are primarily kneeling on a straw tatami mat. With several servers clad in floor-length kimonos-printed in floral patterns of pink, lavender, periwinkle and plum-it's easy to assume you've stepped inside a Tokyo garden or shrine. But really, you're in a former math lab.

Those servers are, after all, Japanese language students fresh to the fine art of kneeling in a kimono without wobbling. Movement is crucial and deliberate. Everything down to the tiny bamboo mixing sticks is infused with significance. "A lot of it comes down to posture, you want to have dainty hands, you don't want to spread your fingers," explained Maren Sunderland on just a few of the intricacies in a traditional Japanese tea ceremony.

The Department of Languages has offered a tea ceremony course for the past eight years, generally spreading tatami on the floors of classrooms. Now, though, they have officially dedicated their new home in the Social Sciences Building, where the new tearoom and an adjacent office have been converted into the Montgomery Dickson Center for Japanese Language & Culture. The center provides a physical space for a growing program (Japanese boasts the highest number of declared majors in the Department of Languages).

In Japan, the tea ceremony is a centuries-old ritual that expresses several deeply held cultural values. The ceremony's methodic steps and gracious presentation reflect the simplicity, modesty, style and calm that define much of the Japanese aesthetic. The tea ceremony, despite its origins in the 9th Century, remains so central in Japan citizens still spend years studying the tradition's artfulness and intricacies.

Students at UAA, though, can take a crash-course in a span of 15 weeks, culminating in a public tea ceremony in the newly converted classroom.

See how complex tea can be 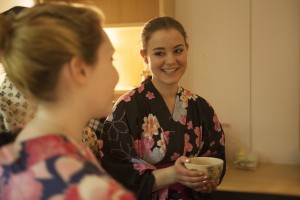 Japanese language students assisted their professors (and borrowed their kimonos) at the tea ceremony in December. (Photo by Philip Hall / University of Alaska Anchorage)

Instructor Yuki Moore-known as Moore Sensei by her students-first started studying the art of tea along with her siblings at a very young age. She learned directly from her grandmother, a tea master in Tokyo, and observed the quiet, meditative ritual, absorbing the importance of each step. Yuki would later become a tea master herself after attending Omotosenke, one of Japan's three most revered tea ceremony schools.

She starts every class at UAA with brief meditation, allowing students to clear their minds of those minor daily calamities like parking tickets and term papers. Early lessons cover the tradition's history, utensils and vocabulary. Next, lessons shift to movement and posture-every pace, bow and turn of the hand is measured and deliberate. Finally, once the students have the fundamentals processes locked down, Yuki fills in the blanks. "Each step and movement has profound meaning," explained professor Hiroko Harada, director of the Dickson Center, who assists Yuki with the ceremony. Students leave the course with a solid understanding of just how complex tea can be.

"I'm so blessed," Yuki said of the tea class. "I'm so glad I can convey what I learned from my grandmother." 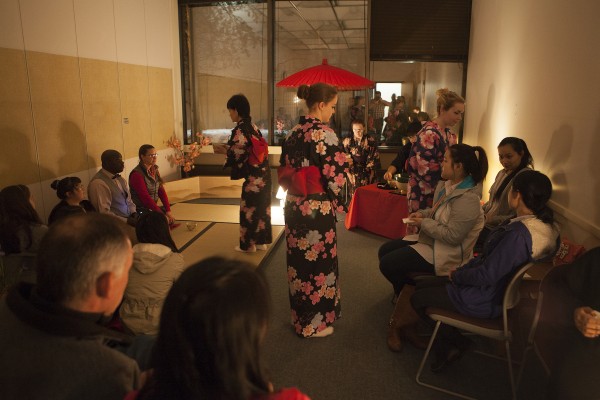 Tea ceremonies are fairly quiet affairs; Soft lights, soft voices, soft steps across the floor. And even though Japan has boomed into a tech powerhouse, the tea ceremony has persisted as a powerful link to the past.

In fact, the tea ceremony may have grown more important in today's digital world. "It's especially very meaningful nowadays when students can use technology to get information and end results so quickly, with no process," Hiroko explained, citing the slow pace of the event. This may be shocking news for the drive-thru Starbucks crowd, but the traditional preparation and presentation of tea can take several hours. "This moment of transcending time with the movement is very precious nowadays," Hiroko added. 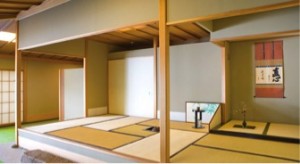 UAA's tea ceremony focuses on the present, but the future is equally compelling right now. In November 2015, Yuki and Hiroko arranged a tea ceremony to thank supporters of the Center, inviting deans, diplomats and, importantly, the university staff who continue to assist in the tearoom's fundraising and design (the "dream room" includes a raised floor with paper-and-wood shōji walls).

The fund has so far brought world-class lecturers and demonstrations to Anchorage, plus workshops for language instructors and even the creation of a Japanese language textbook. In February, the Center will cohost a UAA conference on cyberethics, attended by the Japanese inventor of Paro, a therapeutic seal robot that recently appeared in Aziz Ansari's Netflix show Master of None. Paro plans to visit local Pioneer Homes in Anchorage during the conference.

A longer-term project, though, is the campus tearoom.

Kimonos in the classroom 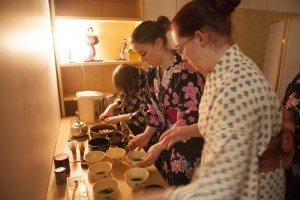 Behind-the-scenes students prepared extra tea to serve the large crowd at the "end of the year" tea ceremony. (Photo by Philip Hall / University of Alaska Anchorage)

On Friday evening, December 11, the Center held a public "end of the year" tea ceremony. The event was as crowded as a morning fish market in Tokyo; Japanese language students-many dressed in kimonos borrowed from Yuki-joined their professors to host three ceremonies in a row. Two students served as hosts, visibly pouring and graciously presenting tea and mochi with a deep bow to kneeling guests. Meanwhile, behind a traditional folding screen, students and professors poured tea from electric hotpots for the extra guests seated in chairs lining the room.

The calm demeanor of the hosts belied their focus and intensity. Despite its delicate motions, at the end of the day, the tea ceremony is still a performance. "It's relaxing and stressful at the same time," said Stacy, a graduate of the class who served as hanto (or assistant).

"It is so uniquely Japanese. I think a lot of it comes down to the culture that trickles down into the ceremony," Maren said of the class's appeal. "It's really a small food and drink ceremony, and I think it's really special to share it with so many other people."

With the Montgomery Dickson Center now formally dedicated, there will be plenty more tea ceremonies down the road, as well as community programs. Stay tuned for upcoming ceremonies or, better yet, become part of the process. JPN 290, the 15-week culture course, is offered every year.

Click here to read more about Monty Dickson, B.A. '09, and the start of the Montgomery Dickson Center for Japanese Language & Culture.

In May 2015, 10 students and two professors traveled to Monty's town of Rikuzentakata. Click here to read their reflections on the program.