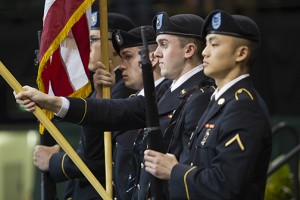 University of Alaska Anchorage 2015 Spring Commencement at the Alaska Airlines Center on the UAA campus in Anchorage, Alaska Sunday, May 3, 2015.

The University of Alaska Anchorage was recently named a 2015 Military Friendly School. Victory Media awards the Military Friendly Schools designation to the top 15 percent of colleges, universities and trade schools in the United States that are doing the most to embrace military students and ensure their success in the classroom and after graduation.

This is the seventh consecutive year UAA has earned the military friendly designation. The university is proud of the 2,429 active-duty servicemen and women, veterans and their dependents who chose to attend UAA in 2014-15.

UAA's Military and Veteran Student Resource Center coordinates a variety of supportive services. Through the center, UAA offers programs including Seawolf Boot Camp, workshops designed to raise staff and faculty awareness of military and veteran education benefits and college transition factors. The center also houses and collaborates with the VetSuccess On Campus counselor, partnering with the U.S. Department of Veterans Affairs to establish a network of support for each military and veteran student.

Learn more about UAA's commitment to attracting and supporting military students at uaa.alaska.edu/veterans.

"UAA named one of the most military friendly universities in the nation" is licensed under a Creative Commons Attribution-NonCommercial 4.0 International License.
January Archive