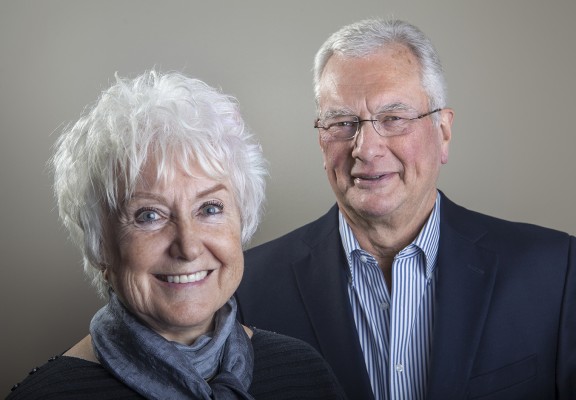 The pedestrian skybridge connecting UAA's Engineering & Industry Building with the university's Health Sciences Building has officially been named "The Parrish Bridge" in honor of Ann and Al Parrish, whose lives, careers and philanthropy have been intertwined with UAA for nearly four decades. "That bridge makes my heart sing!" Ann said. (Photo by Philip Hall/University of Alaska Anchorage)

Ann Parrish earned her bachelor's degree at UAA nearly 38 years ago. She then devoted her massive stores of energy and talent to serving the university and its students as a donor, first female president of the University of Alaska Board of Regents, chair of the UA Foundation Board, and as a creative spark for UAA's popular fundraising fête, Celebrity Chef Invitational.

Al Parrish spent the better part of three decades finding ways to enhance the Providence health-care system in Alaska-originally on local and national policy boards and then as CEO of the Alaska system. As Providence's CEO, he nurtured connections with UAA-swapping land, offering support and training opportunities to nursing students and working with UAA leaders to draw the hospital and university even closer.

"We both feel truly honored and blessed they would think us worthy of that recognition," Al said. 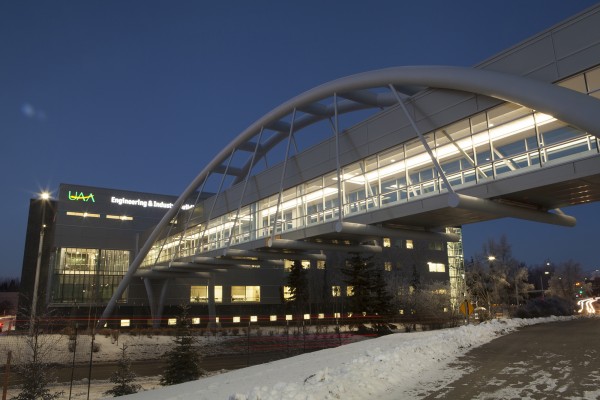 In the early 1970s, Ann worked as a graveyard-shift waitress at the Traveler's Inn in Fairbanks, where Al Parrish was the general manager.

Al had launched his career bussing tables. He moved to Alaska from Seattle in 1965 to open the first tower of the Hotel Captain Cook for Gov. Wally Hickel, and then on to Fairbanks to manage the Traveler's Inn-a hotel that later became part of the Westmark hotel chain created under Al's leadership and originally part of Sheffield Hotels, a company Gov. Bill Sheffield and Al owned.

Ann was a student in transit, who arrived in Alaska after attending Brigham Young University in Utah as an English major. She had turned down an office job at the university to get the waitress job, because she wanted to spend time with her 2-year-old, Lara, and had the energy to work all night, too.

Ann's first stint in accounting was working for her father. She subsequently worked on the accounting side of various businesses, and moved into a bookkeeping role for the Fairbanks hotel.

"She was a strong, independent woman who had her own abilities to do what she wanted to in her life," Al said. "As an individual, that attracted me to her."

"She already had the desire and willingness to participate in bookkeeping and the accounting world," he added.

Ann returned to college in 1974, in Fairbanks. Then, Al was asked to return to Anchorage and oversee the Hickel hotel properties. Ann finished the fall semester in Fairbanks and moved to Anchorage in January 1975. She went to work there as an accountant for Boeing Computer Services, the company that installed data services for what was then the new trans-Alaska oil pipeline.

The couple had three daughters at home when Ann and Al decided she would re-engage herself in getting her degree. In her 30s, Ann enrolled at what was then the University of Alaska - Anchorage campus and, while working full time, pushed herself to gain more business understanding. At the same time, her husband continued his work in the hospitality and tourism industries. He took part in creating the Alaska Visitors Association and Anchorage Convention and Visitors Bureau.

"He was always a bed man," Ann laughed. "In the hotel business, he got people into beds. In health care, he got them out!"

In 1990, while Ann was president of the Board of Regents, the entire university was restructured, creating UAA, UAF and UAS. In that process, the new UAA was designated as Alaska's center for health sciences.

"[Then UA President] Don O'Dowd brought together what could have been a weak statewide health educational effort and made it into a statewide, Anchorage-based cadre of health-care programs needing focus and resources to succeed," she said.

In 2002, Al became CEO of the Alaska Region for Providence Health and Service, a position he held for 11 years. As UAA's health science programs grew and Providence's health system grew, "it became apparent a close relationship needed to happen," Al said. "I'm thankful I played a small part in sowing the seeds at that particular time."

Providence expanded its buildings, more than doubled the square footage, increased the size of the neonatal intensive care unit and consolidated regional functions. "For example, payroll was next to Hooter's, and there were things all over town in Class B offices," Al said.

At the same time this was happening, UAA was building its buildings and programs. The business, administration, art, health science, Alaska Native Science and Engineering Program (ANSEP) and engineering buildings graced the Anchorage campus.

"All that development was taking place in the U-Med area," Al said. "Construction trucks and teams were coming and going."

UAA and Providence worked closely together to develop UAA's nursing program and Alaska WWAMI, and construct the health sciences building.

Chancellor Lee Gorsuch, Chancellor Fran Ulmer and a succession of Anchorage mayors all worked together with Al in developing what is now known as the U-Med District of Anchorage. Al officially served on the UAA Chancellor's Board of Advisors through the terms of four chancellors, and received an Honorary Doctor of Laws degree from UAA in 2012.

Ann earned her UAA bachelor's degree in Business Administration in 1978. She took the CPA test before graduation, and passed all of the sections, in one sitting.

In the early 1990s, Ann brought together a group of local investors to transform one of her ideas into reality. She created a company, Innovative Cooking Enterprises Inc., which did research in an Anchorage test kitchen that contained, at one point, more than 300 bread machines. The company published the "Electric Bread" line of bread machine recipe books, which sold more than 2.5 million copies and were distributed in 29 countries. ICE not only created the content of the books, the company took the lead in a niche industry for more than 10 years.

During her time on the Foundation board, she helped launch the Renaissance Project to raise funds to renovate UAA's Lucy Cuddy Center and house a restaurant training facility. Today, Celebrity Chef Invitational (CCI) brings in donations for UAA's Culinary Arts and Hospitality Scholarship Fund.

In the late 1980s, "Mrs. Betti Cuddy came to UAA, saw the condition of the Cuddy Hall (named for her mother-in-law) and was appalled," said Tim Doebler, program director for UAA Culinary Arts, Hospitality/Dietetics and Nutrition. "We were also concerned about the [hospitality] program, bringing improvements to it. Things happened all at once. Ann Parrish came along and said, 'Let's do something about this.'"

Ann said they led a "SWAT team" whose sole purpose was to engage others to make the renovation happen. Parrish talked to legislators and found money from Alaska businesses, particularly restaurant and tourism companies-bringing in nearly $700,000 to renovate the Cuddy.

"At the time, Al was a bigwig in the hospitality industry," Doebler said. "He didn't know we had a culinary arts program here at UAA. At that point, he got involved."

Together, the Parrishes figured it out and put it all together.

"They're a dynamic duo," Doebler said. Al is a make-it-happen guy, and "Ann is one of those people that truly has a brilliant mind."

After the Cuddy remodel, Betsy Lawer-president and vice chair of First National Bank Alaska-held a brainstorming meeting in her office with Ann and others. That group came up with the idea to "showcase" the new building and create a self-sustaining program: Celebrity Chef Invitational, an event that's still thriving 22 years later. The Cuddy remodel and CCI initiatives are among the reasons why Ann received UA Foundation's Bullock Prize for Excellence in 2003.

"To me, Al and Ann are philanthropists, it's in their DNA," Doebler said. "They care about people, education, UAA, their community. They inspire me."

The Parrishes inspire others, too.

Don O'Dowd says Ann was a member of the Board of Regents during his six years serving as the University of Alaska's president.

"Ann was a smart, effective and courageous chair who gave me and the University great support during her term," he said.

Katy Parrish says her parents have been actively engaged in serving the communities they lived in and continue to model the importance of volunteering to make the world a better place.

"Whether it is serving in established community organizations ... or assisting struggling families caring for their children with special health care needs or being there to support friends dealing with health issues or losing a child, our parents are always there to bring comfort, joy and service to others," she said. "Witnessing their commitment to family and community and the amazing things they have accomplished for the state of Alaska fills me with great resilience and knowledge that despite the adversity we all face, we can rise above any trauma by focusing on gratitude and serving others."

"They showed me that by serving others in the community, my heart would be filled with a sense of accomplishment and gratitude," he said. "They continue to show me the value of lifelong learning and how volunteering in the community enriches our lives. Finally, whenever I have a 'life' question, they take the time to listen, offer ideas to explore and coach me through finding the best answer for my journey."

Betsy Lawer says Ann's work with the university and Al's work for Providence could be more accurately described as an avocation.

"The Parrish Bridge is so apt to honor the two of them, a bridge between the university and medical community," she said. "It simply could not be more perfect."

"Ann's a CPA by trade, so she had a technical, logistical mind," Lawer continued. "But it's also a strategic mind. She'll take a look at a problem and find a strategy to solve it."

What's most striking about Ann and Al?  "Ann's amazing blue eyes," Lawer said. "They're very alert, very intelligent and they don't miss a thing. And Al, he has this amazing devotion. I've served on a number of hospital committees with Al. He also has a great sense of strategy and a great sense of leadership. He knows what's important and has a great sense of people, so he builds great teams and is just widely respected across the board."

Linda Chase, a former teacher who owned a construction company and later founded an event-staging company that manages everything from inaugural balls to memorial services, has known the Parrishes since 1981.

Naming the pedestrian span in their honor was a fitting tribute, Chase agreed.

"I think that is such a clever thing because here is Al at Providence and here's Ann at the university and yet they both crossed over that bridge both ways," she said. "They're both supportive and helped bring about new beginnings in a variety of ways for each organization."

"I think they're both visionary in their own way," Chase added. "They might come in contact with somebody who has a child who has some health problem and they help. They're very personal in their caring. You always want them to be around."