For four years they've steeped themselves in topics like torque and shear strain energy theory, solved thousands of calculus problems, and absorbed almost as many formulas related to everything from spiral curve deflection angles to concrete slab maximum wall load formulas. 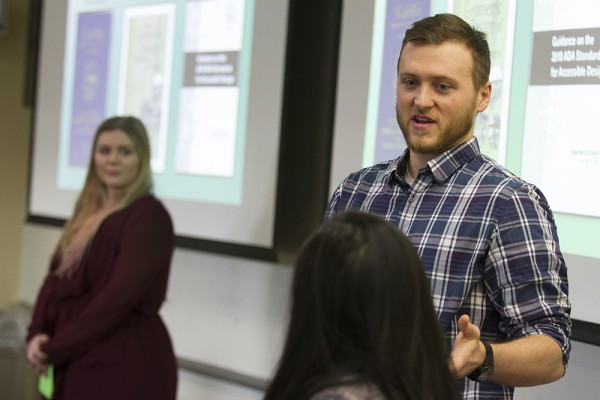 In just a few months, it will be time for civil engineering students in a UAA professor's senior capstone class to move that knowledge out of the classroom and into a new career.

Fortunately, Dr. Osama Abaza's Seawolf Engineering initiative has given these students a head start. They work as if they were consultant design teams on real-world projects for clients like DOT, community councils, the Anchorage Water and Wastewater Utility and Alaska State Parks.

"We in academia focus on technical stuff, theoretical stuff," Abaza said. "Students need to know the application side of engineering. Whatever we do, even if we have experience in the market, we cannot really convey the same message as those who are practicing engineering out there. They need to have that touch from a practicing engineer. This simply bridges between what we do in academia and what our clients help us with."

The key component of Seawolf Engineering is mentors from Anchorage's community of engineering professionals. These volunteer "affiliate faculty" help by spending Friday mornings with those students, listening to their project updates, offering insights about their work and, frequently, guiding them toward positions within Alaska's network of engineers.

"It gives us a chance to come over and show the students what a future career in the DOT might look like," said James Amundsen, chief of highway design for the Alaska Department of Transportation & Public Facilities' central region. "Frankly, we get to do some recruiting. It introduces another option to students who have not really considered a career with the DOT." 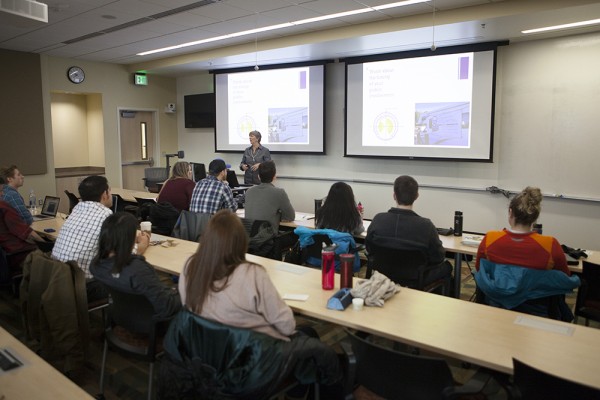 Anne Brooks, a Brooks & Associates engineer, cautions civil engineering capstone students to avoid using acronyms, explain project plans to the public as they would to their mothers, and not to schedule public meetings when people won't be there-for example, during hunting season or when people are working at fish camp. (Photo by Philip Hall / University of Alaska Anchorage)

Over the years, he said, DOT has picked up two dozen engineers who probably wouldn't have come to work for the state agency if they hadn't had a chance to see what a DOT project looks like.

"That's the payoff on coming over here and spending a couple of hours on a Friday morning," Amundsen said.

The students, in turn, offer fresh approaches to design and construction dilemmas, talent that's been tested in a variety of internships and, most valuable, the fact that most of the students are Alaskans who already fit in here and are familiar with this state's many unique challenges.

"Here you can see the kids in action, you see how their brain works," said Anne Brooks, a UAA alumna and professional engineer with Brooks & Associates. "It's like having a free semester-long interview, which is huge."

Seeing how it all fits

"We'll bring over some of our projects so that the senior design capstone students see how the design for a bridge fits into a larger project," he said. "We get the benefit."

The newly reconstructed West Dowling Road was one of the capstone projects, he said.

"In a couple of cases, particularly down around the creek, they had a couple of ideas on how to connect the trail that worked better than the design we had. We ended up with a better design because they took a second look at it."

"The student project manager for the class ended up being hired by the consulting team doing the design for that project, and was directly involved in taking their idea and building it," he said. "It's a real effective program."

Stephen Nuss, capital program manager for Anchorage Water and Wastewater Utility, is another mentor. He says AWWU recognizes the benefit to the community of collaborating with Abaza and his civil engineering students. 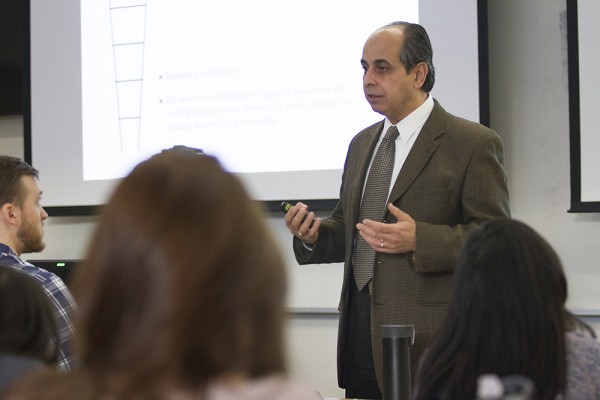 Professor Osama Abaza, in 2007, began welcoming engineers from public and private agencies to his civil engineering senior capstone classes. His collaborative Seawolf Engineering initiative has borne fruit, resulting in jobs and internships for many of those students. (Photo by Philip Hall / University of Alaska Anchorage)

He spends time in the evenings and on weekends, assisting with commenting on proposals, on the projects and helping review papers, to give a nonacademic, third-party perspective.

"If they were an employee of mine, what would my comment be on their paper, their presentation, and what could they do to strengthen them." Nuss said. "My project managers when they've come in here, they recognize the value of having a fully developed engineer in training coming out of the system instead of just a technically developed engineer."

Nuss said he attended UA Fairbanks. In his senior design class, he participated in creating a conceptual airport design for the village of Alakanuk.

The runway there was eroding and the class was assigned to design a new airport. "The actual class work was very much the professor talking every single week during the course of that class," Nuss said. "Having participated here the last four years, I wish I had had this kind of diverse insight as part of my senior design class. Not that my senior design class was bad, but it does give you that diverse perspectives these students will encounter throughout the course of their engineering careers."

'I have value to add'

Jessica Farrell, a student in Abaza's class, is involved in design for the Eagle Glacier facility project. In two internships she's had-one with Alcan Construction's quality control program and the other with Alaska DOT&PF-she learned a valuable lesson.

"That the theory is sometimes different from the practical side," she said. "It's really cool to have the professionals come in and talk about what they experience. You learn enough to jump in with two feet running."

Seeing how the class mentors continue learning and evolving throughout their careers was another key lesson.