How LIGO detected the gravitational wave, proving Einstein was right! 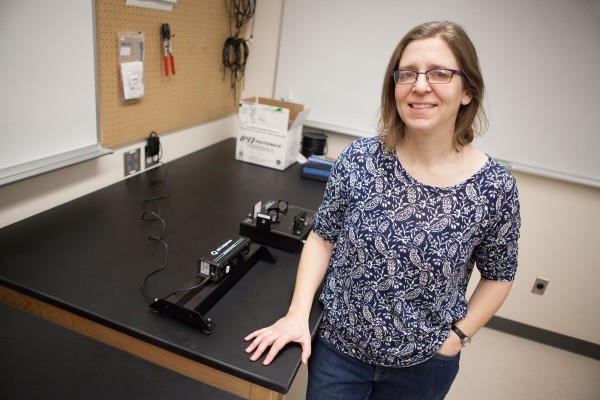 Physicist Katherine Rawlins with a small version of an interferometers. Using it, she explained how the LIGO interferometers detected a gravitational wave from a cataclysmic event-two black holes merging-more than 1 billion years ago. It's been a very long journey! (Photo by Philip Hall/University of Alaska Anchorage)

I got to the office a few days ago to find an email in my inbox from UAA astronomer Travis Rector. The subject line read "LIGO." The key sentence: "It's hard to express how big a deal this is!"

That morning's "gravitational wave" headlines had slipped right by in my coffee-deprived, sleepy-Earthling state. Interesting, one brain wave murmured, but no time to grasp it now.

Rector's email was a wake-up call. He also mentioned that one of UAA's physics professors, Katherine Rawlins, had worked at LIGO (Laser Interferometer Gravitational-Wave Observatory) about a decade ago. There's almost nothing better than to invite an expert to explain a topic they're excited about; it's vivid, like visiting a country instead of just reading about it.

Katherine Rawlins was willing. By the time we got to her building, she'd commandeered a storage room and set up a tabletop instrument called an interferometer. On a very small scale, it could demonstrate how LIGO detected that gravitational wave. 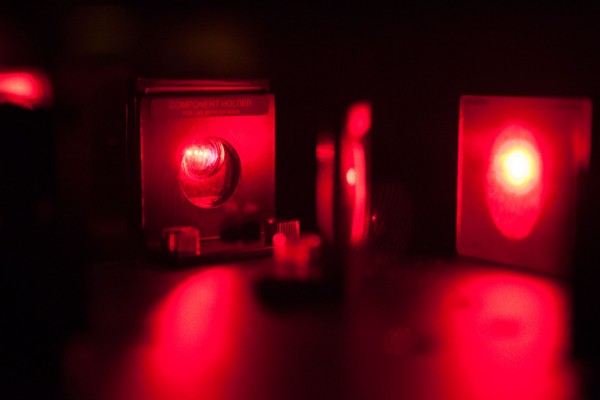 She shone a tiny red laser light onto a mirror, called a beam splitter. The light beam split in two. Each beam traveled a different path and hit a second mirror before bouncing back to the beam splitter and rejoining.

Light travels in waves. The crests and troughs that don't match after a split beam rejoins are proof of interference. The now-famous gravitational wave interacted with the split beams located at both of the LIGO sites, one in Washington and one in Louisiana.

So how does this prove Einstein's theory of general relativity?

One hundred hears ago, long before anybody knew about black holes or quantum physics, Einstein said space and time and gravity are intertwined. So, explained Rawlins, "if you have a mass, the presence of that mass distorts the space around it. And if you make some sort of violent change to that mass, then the distortion in space and time will make a ripple that spreads out at the speed of light."

That ripple was the gravitational wave. The violent change was the shuddering merger of two black holes that had been circling one another with increasing velocity and growing proximity, somewhere way out in the southern hemisphere. Watch a simulation here. 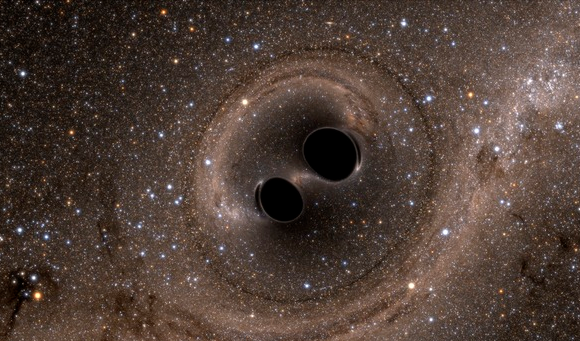 This very wave has been enroute to us for more than a billion years. By the time it hit the twin LIGO beam splitters in Washington and Louisiana, it was reduced to a brief 1/10th of a second that was documented in the sound of a quick chirp. (Hear the chirp here.)

Rawlins is a professor of physics who came to UAA via Yale and the University of Madison-Wisconsin. She grew up wanting to be an astronaut, and even applied once, but her eyesight kept her from continuing. As a young post-doc more than a decade ago, she worked "the owl shift" in LIGO's instrument room from midnight to 8 a.m.

"Along with a detector expert who knew much more than me," Rawlins said, "I would sit there surrounded by computer monitors, keeping an eye on the noise level of the detector and other diagnostics." 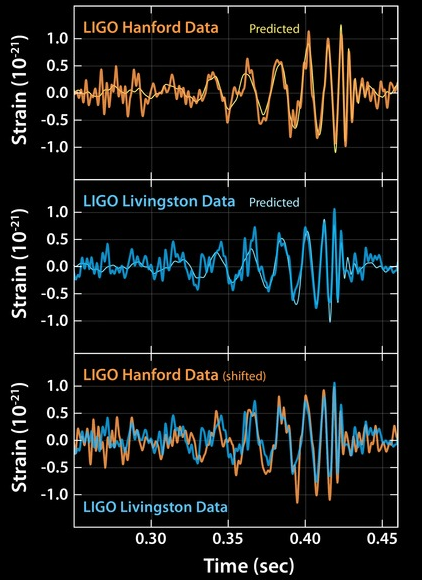 Images of the detected wave at Hanford in Washington state and Livinston in Louisiana. Image courtesy of LIGO.

Her main job was to scour data for signals that were consistent with an airplane flying over head-something you wouldn't think would be worrisome to a scientific experiment. "But to this one, it is," she said. "All kinds of technology holds these mirrors absolutely steady. It is the most precise machine I have ever heard of." In fact, after she left LIGO, the project went through a major technological upgrade to increase its sensitivity. Now it's called Advanced LIGO.

The irony is scientists had to build LIGO with no guarantee that a gravitational wave would come. "You turn on the detector, and you wait" for a big-enough cosmic event.

Rawlins said physicists have spent entire careers-decades and decades-chasing the gravitational wave. After a few years at LIGO, she was ready to move on. "Ironically, I thought searching for astrophysical neutrinos sounded more plausible," she laughed. As it happens, Rawlins was part of an international research group, the IceCube Collaboration, which accomplished exactly that in 2013.

Scientific success is incredibly exciting, Rawlins said, a moment to relish. UAA's small physics department lit up with the report. Department colleague Tyler Spilhaus, who studies gravitational physics, shared the glow. The day the news hit, he was about to head into work when Facebook stopped him cold. An old research advisor had posted 64 links, all to LIGO, a sure sign something was up.

Rawlins woke up to a text from her mother that read: "LIGO is in the news." And in a maternal nod to her daughter's stint there, added, "I knew it when!"

A version of this story written by Kathleen McCoy, UAA Advancement, appeared as a Hometown U column in the Alaska Dispatch News on Sunday, Feb. 28, 2016.

"How LIGO detected the gravitational wave, proving Einstein was right!" is licensed under a Creative Commons Attribution-NonCommercial 4.0 International License.