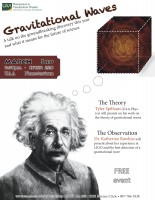 On Feb. 11, the Laser Interferometer Gravitational-wave Observatory (LIGO) made history by releasing a paper with the first gravitational wave detection. After 100 years of theory and 25 years of observation, it had finally been done. Proof gravitational waves actually exist.

This tremendous discovery will forever change the field of astronomy and how we understand the universe. First theorized by Einstein, it was thought to be impossible to actually detect. After many years and upgrades, an instrument was made that could actually do it. LIGO observed the first gravitational wave from a pair of solar-mass black holes spiraling into each other on Sept. 14, 2015, at 5:51 a.m. EST.

Join the UAA Planetarium for a talk on this groundbreaking discovery and what it means for the future of science. Two UAA professors from the Department of Physics & Astronomy will present on their work with gravitational waves: Tyler Spilhaus will discuss his research on the theory of gravitational waves; Katherine Rawlins, Ph.D., will talk about her experience at LIGO and the first detection of the gravitational wave.

This event is free and open to the public. Seating is first-come, first-served. Doors open at 6 p.m.

For a schedule of upcoming UAA Planetarium shows and events, visit uaa.alaska.edu/planetarium.