What to know about Senshido

Alaska is a national leader in many grim statistics-rates of domestic violence, sex crimes, men murdering women. And that's just what's reported. Anchorage Daily News even called Alaska, in a 2013 article, "rape capital of the U.S." and equated sexual violence with an epidemic in the state. 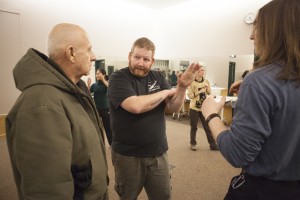 Hilary Morgan, CEO of YWCA Alaska, is well aware of the state's reputation and cold realities. Her team works to empower women and lower the state's levels of assault and abuse across the state. They're bringing that initiative to campus this semester.

UAA and YWCA have partnered to host self-defense courses five times throughout the semester. Called Senshido, the classes are relatively short and take a unique approach to self-defense, emphasizing psychology as much as physicality. Participants learn both to banish their own self-doubt and to build their attacker's ego. Senshido then teaches a range of close-range "shredding" moves to implement when the attacker lowers their guard. Essentially, you already have survival skills; here's how to fine-tune them.

Alaska's rape rate is nearly three times the national average. "We have to teach women how to get mad," Hilary noted. "We can cajole our way out of a lot of things, but there are times when you just have to scream and yell ... We need to teach women and men how to defend themselves."

And that's exactly what Senshido aims to do.

"Who wants to hit something?" asked instructor Malachi Bond.

The name Senshido evokes images of ancient temples, but it's not what you expect. There is no belt system, there are no uniforms. Rather than memorizing movements, Senshido emphasizes gross motor skills and quick reactions.

On the surface, it blends self-defense with physical combat, much like the more common martial arts. But this system digs much deeper. There are other elements at play, including behavioral psychology, criminology, body language and communication. The system is based on interviews with both rapists and assault survivors, all in an effort to dissect real violence and understand the criminal brain.

"We're not trying to preach paranoia," Malachi emphasizes, "but we talk about how to be more mindful."

In Senshido, "a woman's intuition" is far more than just a phrase. "Our biggest defense is our intuition," Hilary said; if something doesn't feel right, it's not right. But through constant social reinforcement, women are generally instructed to turn off that intuition. "It's always in response to something and a lot of people try to rationalize it away," Malachi said, referring to intuition as "our best friend." Rationalizing away intuition can be especially harmful considering, in four out of five cases, rape victims known their assailant.

When women react to perceived threats-in movies, in public, on Bravo-they're often seen as being hysterical or dramatic or a host of other negative gendered words. "We're taught to be polite and we don't want to offend anyone," Hilary continued. 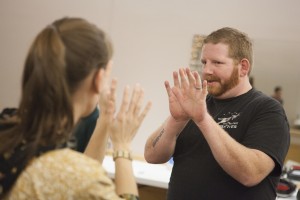 Malachi instructs participants how to leverage a predator's expectations to aid in their own self-defense (Photo by Philip Hall / University of Alaska Anchorage).

But there's another applicable phrase here-when life gives you lemons, shred some lemonade. Senshido teaches ways to leverage these negative social pressures into action (and grab someone's trachea like a coffee mug).

Attackers expect their targets to be polite, meek and submissive, meaning there's power in reversing that expectation. Women can manipulate the predator/prey relationship by feigning compliance, faking fear and drawing their attacker close. "In my mind, as a male attacker, I'm thinking I got this person where I want them," Malachi commented. "When she whacks me in the throat I will never see it coming."

Self-defense classes are generally taught from a male perspective, based on examples of how men fight. Senshido, though, takes the opposite approach and promotes the power of lulling attackers into a false sense of security. It plays on the attacker's ego to lower his guard, giving women a clearer shot at providing that brutal hit (Senshido tip: aim for the eyes and throat).

YWCA's course provides plenty of practice in these close-contact encounters. And the material is intense: how to burst an eardrum, break a headlock, evade a hair-grab, when to launch back. Knowing that attacks usually escalate, here's how to prepare, just in case.

Malachi packs a lot of material into his evening class, but there's plenty of room for "what ifs." Do you have a specific area of concern or a scenario to attempt? He'll take the time to address it. He'll also act as an aggressor in most situations. But, though this tall, burly man may curse you into a corner, remember he's a trained instructor (and father of three).

Prepare to be uncomfortable. The subject matter is undeniably sinister, but the class is awkward for other reasons. By the end of the class, your classmates may have you in a chokehold, you'll shove someone against a wall, you'll practice your best, loudest snarl in a room of strangers (we all know how to bite, but we rarely practice growling and biting together).

Through it all, there's an air of levity that belies the subject matter. This class is physical, yet enjoyable, and there's plenty of nervous laughter circling the room as you practice your first reverse neck grab on someone you haven't even met yet. There's plenty of people hemming and hawing and hoping their partner takes some level of initiative during the exercise first.

So wear your sweatpants from the dorm, or stroll over in khakis after work. There's no uniform for Senshido, because there's no set situation for sexual assault. Courses are free for any student, staff and faculty of the university. Community members can pre-register through YWCA for $15.

Here are the upcoming dates this semester:

"What to know about Senshido" is licensed under a Creative Commons Attribution-NonCommercial 4.0 International License.