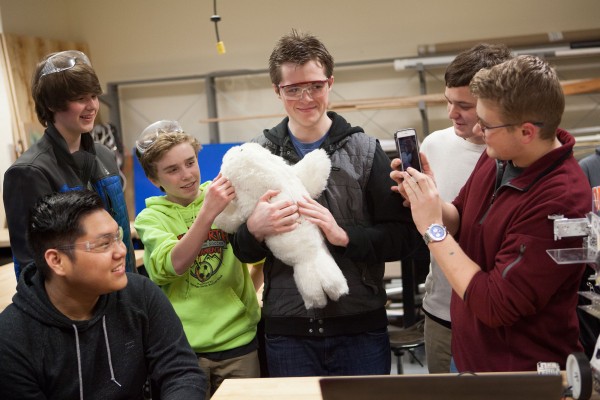 This really surprised me: National surveys show that the elderly in Japan prefer care by robots above care delivered by foreign-born workers. More than 80 percent say they'd like their very own robot-caregiver.

Robots also have a bead on young Japanese women. Right now, many aren't marrying, marry late, or refuse to have children. Analysts think their behavior "may be a form of resistance or protest against a social system that continues to regard women as second-class citizens." Could robots be a part of the answer here, too-house butlers and babysitters, capable of relieving working moms of wearying "second-shift" duties?

Both situations came out in visiting anthropologist Jennifer Robertson's talk at UAA's recent Cyber-Ethics Conference, a joint effort of the Montgomery Dickson Center for Japanese Language and Culture and the philosophy and history departments. The two-day conference aimed to understand why Japan is leading the world's robot wave, and to ponder the implications-practical, ethical, legal, economic, cultural and social. Featured papers ranged from cyber security to space-time worms, some written by undergraduates and some by faculty. But robots stole the show, including two presentations on the moral status of  "bot surgeons."

Robertson, from the University of Michigan, shared keynote with Takanori Shibata, a research scientist and visiting fellow at both the Tokyo Institute of Technology and MIT. (Find both their keynote podcasts at this link.) You may know him by his creation, Paro, the therapeutic robot baby harp seal that gives comfort to patients in hospitals and nursing homes.

Shibata described Paro's therapeutic benefits, from palliative care for cancer patients to soothing dementia in the elderly. In 2009, the U.S. Food and Drug Administration (FDA) certified PARO as a "neurological therapeutic medical device." 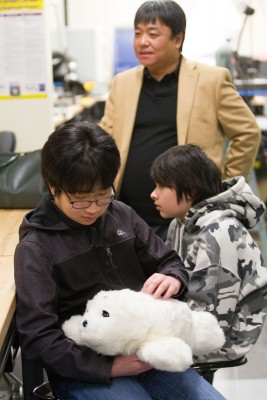 Dr. Takanori Shibata shows students from the Nerds of the North program his neurological therapeutic medical robot PARO in the Dimond Engineering lab at Dimond High School in Anchorage, Alaska Thursday, Feb. 25, 2016. Shibata will be the keynote speaker for the Cyber-Ethics Conference being held at the University of Alaska Anchorage. (Photo by Phil Hall/UAA)

An attractive curiosity, Paro was snagged for selfies at the UAA conference, and on a field trip to visit Dimond High's Nerds of the North program. The fuzzy white seal seemed never to encounter a human that couldn't be charmed, including during a visit to Anchorage's Pioneer Home.

At the global academic level, Paro draws much debate. Some argue that entrusting emotional support for humans to a robot is just wrong, if not dangerous. But many news reports after the Fukushima earthquake documented scenes of the elderly deeply comforted by the seal robot. Others suggest that people who find human interaction difficult might indeed be better soothed by the right machine.

Americans don't yet share the same down-home connection that Japanese. We often associate "robot" with machines made for the Department of Defense for deployment in war zones; they hardly snuggle up with us on the couch. Still, we love our smartphones, and call them addictive-they just don't have faces.

Indeed, Robertson shared a slide of the back cover of a 2003 Smithsonian magazine, showing an American family clustered around a new family member, Honda's robot Asimo. Public backlash (Robots will steal jobs!) was quick and fierce; Honda pulled the ad, replacing it with scenes of Asimo in less specific social settings-say running with a group of children-but never again deep in the heart of an American family.

That is-until last month, 13 years later. Robertson said she was refreshing her talk with new slides (It's a chapter in her forthcoming University of California Press Robo Sapiens Japanicus: Humanoid Robots and the Posthuman Family), when she came upon a fresh image of a smiling American family surrounding its member robot.

Americans certainly trail the Japanese in embracing robots. In fact Japan accounts for 52 percent of the world's share. But beyond familiarity, the Japanese are counting on the robotics industry to revitalize a stalled economy, and shore up a social system centered on the patriarchal family.

Abe also hopes robots might nudge young women back to marriage and childbearing, if they have household help with some of the workload. But perhaps most startling to an American audience was Robertson's mention of emerging robot rights in Japanese society.

The family unit has special significance in Japanese society, Robertson said, but it's not necessarily the same concept of family that Westerners understand. A Japanese family operates much like a little corporation, adopting Japanese nonrelatives into the family to contribute to its well-being or manage it more successfully. A childless couple might adopt a younger couple to bear children and thus extend the family.

Being born Japanese is everything in this system. Indeed, the foreign-born cannot become citizens. Robertson gave the example of a young Korean man married into Japanese family; he would be only an addendum on the family's household registry or koseki. Despite the marriage, he cannot claim Japanese citizenship.

But here's the robotics twist. In 2010, the government granted Paro the harp seal a household registry, or koseki. They declared its creator, Shibata, as the legal father, and its birthdate to be Nov. 7, 2010.

"By having a Japanese father, Paro is entitled to a koseki," Robertson explained, "confirming that robots have an avenue to citizenship."

A machine having more rights than a human being seemed unsettling to many in the audience. Other post-talk questions included frustration over sexless robots that are gendered according to job role. Receptionists tend to be built like women, Robertson noted, right down to breasts and soft voices.

These and other topics connected to human-robot coexistence will be the subject of future forums at UAA.

A version of this story by Kathleen McCoy appeared in the Alaska Dispatch News on Sunday, March 6, 2016.