Kennis Brady is in Greenland right now. On a work trip. With 243 teenagers. 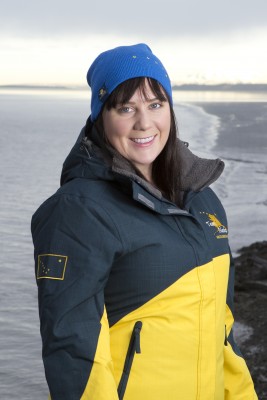 I AM UAA: Kennis Brady, M.P.A. '13, wrote her graduate thesis comparing Team Alaska's rural and urban participation. Though she works in healthcare policy, that project earned her a media liaison gig with Team Alaska that brought her to the Arctic Winter Games. (Photo by Matt Crockett, Team Alaska)

As media liaison for Team Alaska, she's in charge of coordinating press, updating social media, providing updates, connecting parents to competition footage and encouraging those media-savvy teenagers on Team Alaska to document their incredible trip to Greenland for the 2016 Arctic Winter Games.

Team Alaska is a statewide non-profit founded in 1968 and, of the nine delegations competing in Nuuk, Greenland, it's the only state-based contingent (meaning there is no national counterpart...Team Alaska exists for the biannual youth competition. This year's Arctic Winter Games-featuring 16 cultural and competitive Northern sports-is already underway, running March 6-11. If you're following along from home, you can thank Kennis for the coverage.

Though she's officially representing Team Alaska, Kennis is clearly on team Alaska all the time. She's a huge champion of the state; while most people run to REI or the mountains when they arrive in Anchorage, Kennis discovered something different to appreciate. "I found it very exciting when I moved here and sent my résumé to several organizations and every single one said yeah, we would love your help," she recalled. In her eyes, Alaska is rich in both outdoor adventures and urban opportunities.

That drive to connect, engage and improve the community led her to a career in policy. It also led her to Team Alaska. After all, she wrote her master's thesis on the Arctic Winter Games. 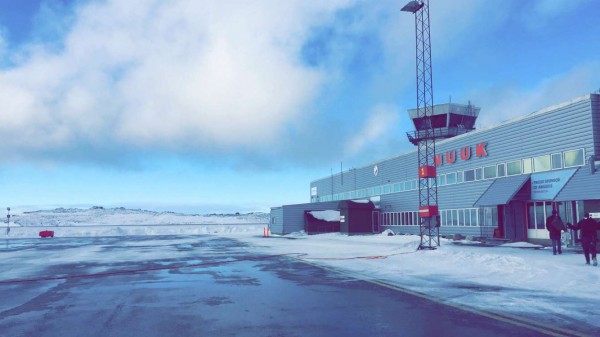 This year's Arctic Winter Games are in Nuuk, Greenland from March 6-11. (Photo courtesy of Kennis Brady)

Back to the North

Originally from Anchorage, Kennis moved to Spokane with her family in junior high and later graduated with a political science degree from University of Washington. UAA's Master of Public Administration program provided a perfect opportunity to return home.

"I wanted to reconnect with my extended family and reconnect with Alaska ... My plan was to come back for three years and leave again. Now its been six and I'm still here," she said, laughing. "Now I have no plans to leave. I think there are amazing ways to be involved here-if you like Alaska, you can really make a difference."

The M.P.A. program at UAA provided more than an education; it also provided valuable connections in her old-yet-new-again community. In addition to ambitious classmates and encouraging professors, Kennis also met various guest speakers and project advisors who she continues to work and volunteer with today. "Just being able to form those relationships and build that community while gathering the skills and information on the policy world-specifically how it operates in Alaska-has been very helpful," she said.

Today Kennis works in health policy at Alaska Primary Care Association, which provides training and technical assistance to the 29 federally qualified Community Health Centers throughout the state. CHCs provide healthcare access both to underserved populations and in remote areas. As an assistant policy director, Kennis works "to eliminate any policy and process barriers that exist for healthcare access for Alaskans."

Nuuk, a city of nearly 17,000 residents, will see a 12 percent population increase during the 2016 Arctic Winter Games. (Photo by Oliver Schauf, Wikimedia Commons)

But, in addition to work, Kennis has many volunteer roles in Anchorage. And for two weeks every other year, she completely immerses herself in her gig as media liaison with Team Alaska. Oddly enough, that career opportunity also came from the M.P.A. program.

Soon after settling in Anchorage, Kennis was selected to lead Girls on the Run for Southcentral Alaska. Chapters of the nationwide non-profit organize after school programs for preteen girls that use group runs as an avenue to healthy mental and physical habits, plus social and emotional learning. Through her involvement, Kennis connected with Governor Parnell's Choose Respect initiative and, subsequently, Team Alaska.

"When it came time to choose a thesis topic, our professors encouraged us to reach out to organizations we knew or had already talked to," she explained. So she called up Team Alaska and asked if they needed any help. Team Alaska, like the Arctic Winter Games, exists to promote Arctic cultures, but recent rosters showed a dip in rural participation. For her research, Kennis worked to discover the root of the urban shift and promote methods for rural engagement and cultural inclusion.

After graduation, Kennis sent along a friendly thank you email to Team Alaska and indicated she'd love to stay involved. Conveniently, the organization was looking to fill a media liaison role for the 2014 Games in Fairbanks. Kennis got the job. 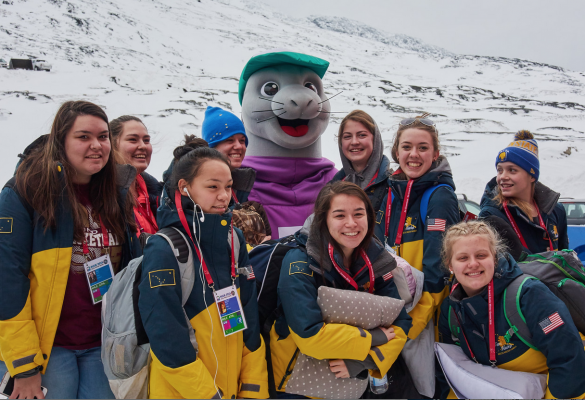 Kuluk, the Games mascot, greeted members of Team Alaska at the airport in Nuuk. (Photo by Arctic Winter Games)

She has varied goals as media liaison. She's part news desk (generating press for Team Alaska), part social media maven (moderating the website and social media) and part camp counselor (encouraging young athletes to provide content for both the team and their parents stuck at home).

It's certainly a challenge; for one thing, communication platforms often change between Games. This year, the lens is on Periscope (Instagram is so 2014). Then throw in time zones, language barriers and the budding Wi-Fi capabilities of Nuuk, the Greenlandic capital (pop. 17,000) perched on the edge of an arctic fjord.

But it's no problem for Kennis. She's admittedly a glass half full person, who can find the positive in anything. And she's especially positive about Alaska.

"I think Alaska is a really special place because you can still do anything here," she stated. "I think we have so much room for innovation, development and for growth, and we have the capability to do that in a very positive and unique way, which I don't think you can find anywhere else."

Kennis is still involved with Girls on the Run... and also United Way, and Our Alaska, and a bunch of other volunteer roles. She, obviously, encourages everyone to take part in Alaska. "You can get involved at any age and in anything that you're interested, which is really special," she added.

So set aside those bald eagles and salmon runs. There's a great community in Alaska, too. "It's easy to forget that that's an exciting thing," Kennis added. "You can get involved in anything you want here."

"Greetings from Greenland!" is licensed under a Creative Commons Attribution-NonCommercial 4.0 International License.