A linguistic look at Anchorage and community 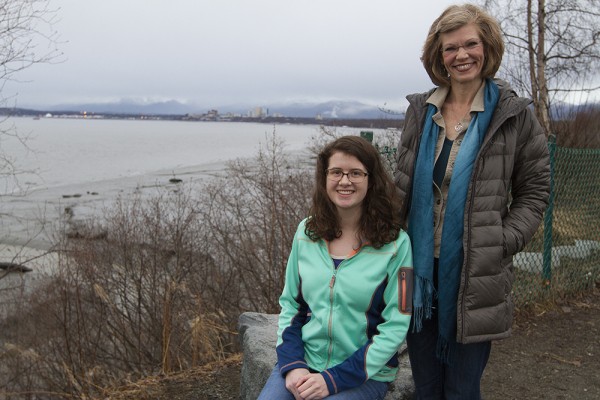 UAA's Dr. Clare Dannenberg, right, and her linguistic anthropology student, Yvette Pype, devised a research project in which Pype interviewed 12 Anchorage residents about their experience in the Good Friday 1964 earthquake and their recollection of 9-11. Pype will present her research project at the upcoming UAA Undergraduate Research and Discovery Symposium, in April. (Photo by Philip Hall / University of Alaska Anchorage)

"My first step, when one starts to roll now, is to open the door. It's much easier to prop one shut if you need to later than it is to try to pull on it and it's stuck." - a research subject discusses one of her recollections of the Great Alaska Earthquake of 1964. UAA student Yvette Pype interviewed the woman as part of a linguistics research project she devised with guidance from Dr. Clare Dannenberg, in which Pype talked with a dozen subjects from Anchorage about their recollections of the quake and 9-11. Pype will present her findings April 15 during the UAA Undergraduate Research and Discovery Symposium. Project posters will be displayed at the UAA/APU Consortium Library from April 11-14. We recently spoke with Pype and Dannenberg about their work.

How did you first come up with the idea for this project?

YP: I took a class with Dr. Dannenberg. It was about linguistic anthropology and I thought, 'This is really cool.' So I contacted her and said, 'Hey, I'd like to do more, what can we do?' We got a grant through the [UAA University] Honors College. Anchorage is a really cool city, on the edge of wilderness. It's close to Seattle but not. We thought it would be interesting to learn how people think about Anchorage, how they think about themselves in relation to Alaska and the U.S. The earthquake was the first topic. I needed another event [with a] U.S. [scope] and we were talking about it. I was thinking the JFK assassination. We wanted to pick something that was a little more recent, however, so I decided to pick 9-11 because it is a disaster that affected the United States as a whole and because it is an event that everyone who remembers the earthquake would have been alive for. [However,] the events are not as important as the way they were talked about.

CD: This is part of a larger project that's been going on a few years, called Talking Anchorage. This is my third year at UAA. I was at Virginia Tech for many years before that, moved here because of my husband's job and got a tenure-track position here, so it was wonderful. I became interested in Anchorage. It's such a young city, with 95 languages spoken in the school system. There's so much diversity here.

How did your first experiences in Alaska lead to "Talking Anchorage" and this project, in particular?

One of the things I noticed the first few months here, someone told me Alaska's a really small town. I would think, 'What does that mean?' It was more about, people here are connected, they're connected in ways despite diversity and cohere around this concept of community and community in Alaska. Anchorage is a special place as a city and metropolitan area. So I started to think about this whole idea of, how do people really talk around here? And so as a linguistic anthropologist, we look at the structure of language. The grammar and pronunciation can tell us a lot about how people orient themselves into groups, believe it or not. We also look at how that structure of language correlates to social factors of community, like socioeconomic class, ethnicity, gender, age and so forth. There's a symbolic association between how people choose to express themselves and their own ideologies around community, neighbors, coexistence, boundaries between different communities, Alaska and the rest of the U.S. It's been since 2013 that this [project] has really taken shape.

What first fascinated you about linguistics?

YP: I guess it's really the idea that what we say is a reflection of who we are, the idea that when you're listening to someone talk you can hear things they're not necessarily saying but [reflect] who they are. I also really like the idea of story sharing and how when you give someone your voice, it's like a part of you. It's really cool.

I had been in a class with Dr. Dannenberg and we briefly talked about deixic markers-words that orient people to place, space, time, here versus there, then versus now, my versus our. We briefly talked about it-when we get these stories, how am I going to figure out how people talk about things? Deixic markers were an interesting way to do that. It was a pretty fast process as far as figuring that out.

How did you choose the people you wanted to participate?

It's called a snowball sampling. I actually went to the senior group at my church, got a couple of names that way. Got a couple of mother-daughter teams. It would snowball, like a "friend-of-a-friend" technique.

Did you attract a diverse sampling?

I have a diverse neighborhood sampling but since these were people here during the earthquake, they are mostly female, mostly white.

CD: When you're in the beginning stages of a study, you start out with whoever will share their story and build from there based on what becomes marked in the interview. So initial findings may show how this group does, but then we start inviting other kinds of samples. So instead of just a snowball which is fairly random we create more of a purposeful [sampling] where we preselect people based on various demographic characteristics. I'm at the mindset in the kind of work I do as a linguistic anthropologist that we should stay curious because there's always more to know. Always. You never reach the end of exploring a particular sample of people. That's what I find fascinating because there are so many dimensions to people and so many dimensions to community and I just want to know everything.

YP: It really varied. I met people in coffee shops, I went to people's houses. It's a loose-structured interview type I was doing. You basically sit and have a conversation with somebody. It's really cool because you just get to hear the stories. It's laid back. As long as I kind of touched on both topics, it doesn't really matter what you talk about. It's fun.

CD: The goal of these interviews is to elicit natural, relaxed conversation because that is theoretically the real language structure, so people aren't putting on airs or trying to talk a particular way to impress. The less attention they're paying to the speech, the more real their speech becomes in reflecting who they are-that sort of loose structure. Yvette is a perfect interviewer because she also is so gracious. She wants to listen to the people, wants to listen to the stories. That makes people feel so comfortable.

What things did people say?

YP: I wasn't exactly sure how to approach the 9-11 topic because I would ask people, 'Were you here for the earthquake?' But to talk about 9-11, I had to approach it a certain way. I started asking this question: 'Do you think 9-11 changed America?' That's when people started saying 'we' and 'our.'

What's it like to see your community, the world, from the perspective of a linguist?

CD: It's wonderful, but I do have to turn it off sometimes. When I'm interviewing and doing these kinds of interviews Yvette did, I want to be in the moment with my participants. It's about sharing that moment of communication and not me stepping back and being in my head and processing-'Oh, they just said this,' or 'Hmm, this is this or this is something I want to look at later.' The beautiful part of my work is that it's about people and being with people and then the rest just kind of follows from that.

"A linguistic look at Anchorage and community" is licensed under a Creative Commons Attribution-NonCommercial 4.0 International License.