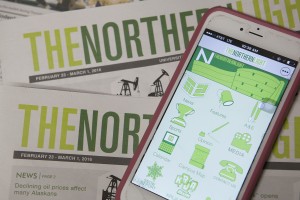 Download the new The Northern Light app and get student news direct to your device (Photo by Philip Hall / University of Alaska Anchorage).

For nearly 30 years, The Northern Light, or TNL, has been the go-to resource for campus news and student opinions. The student newspaper is always evolving and always engrossing-the most recent issue included UAA basketball recaps, scary movie reviews and even recipes for espagnole, béchamel and the other "French mother sauces." Take the front page as an indicator of the diverse reporting-features editor Kathryn Casello's dual lead stories covered A) Justice Scalia's constitutional legacy and B) a trip report from Pack Rat Antiques.

Now UAA's news and campus voices can arrive direct to your device no matter where you live in #SeawolfNation. After years of effort, The Northern Light app is at long last live. The student staff celebrated the achievement with an app release party last week in the coziest corner of campus, the Student Union Den. The night included Moose's Tooth pizza, Middle Way Café cupcakes and five musical performances (including, as a further example of the staff's diverse skills, several soulful standards from the front-page features editor).

News of the news 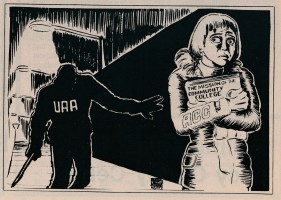 The Northern Light resulted from the merger of UAA Voice and Anchorage Community College's ACCent. This grim political cartoon from the waning days of ACCent shows the student perspective on the merged campus plan. (Image courtesy of Archives and Special Collections, University of Alaska Anchorage)

But those contentious days are long gone. Print journalism has changed significantly since 1988, and The Northern Light has grown its operation to keep pace. Today, TNL is Alaska's fifth largest newspaper, delivering 2,500 issues around campus and to area businesses each week, including at Humpy's Alehouse and Kaladi Brothers Coffee. The app is just the latest step in the story.

It wasn't a quick process by any means. The staff talked about launching an app for several years, but the momentum never lasted long enough. Such is the curse of a student paper-TNL is entirely student-run, allowing complete editorial control on one hand and a constantly rotating door of graduating seniors on the other. 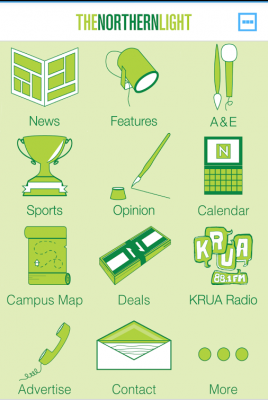 Tiles on the app's landing page come from several past and current graphic designers on The Northern Light's student staff.

The app itself is a testament to the cresting waves of involvement. Current graphic designer Jian Bautista designed several tiles on the app's avocado-colored landing page, but so did her predecessor Jay Baldwin, B.A. Art '15. The app icon, meanwhile, comes from graduating art student Stefanie Vigoren (Jay and Stefanie now work as graphic designers in Anchorage). The digital content draws from the weekly print issues, delivered each Tuesday of the school year, but includes archived stories from years of previous staff writers and editors.

Editor Kelly Ireland is happy to finally have the finished product out the door. "That was the biggest goal for me when I came on as executive editor," she said. She's now in her final semester, but the app has been kicked around throughout her three years on TNL's editorial staff. "It's a big relief to have it done."

The app's recent publicity and accessibility should boost the paper's visibility. Earlier this year, TNL staff surveyed student readership and received high praise from loyal readers, but they found a surprising number of students didn't even know they existed (impressive, considering newsstands guard the doors of nearly every campus building). "We were just like.... What?!" Kelly said of the staff's collective reaction to the results.

"I hope this [app] helps people see that TNL exists," Managing Editor Samantha Davenport expressed. Though the paper's had a mobile-friendly website for years, the app can put the team's content front and center on the phones and in the minds of UAA students, Anchorage residents and student media alumni.

"I don't think you have to be a current Seawolf to enjoy it," Samantha said of the student paper's appeal. "News is news." 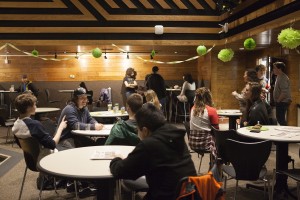 Though the app was completed over the summer, the number of downloads kept to a pretty close circle of staff and friends...until now.

TNL's app release party took over the Den on Thursday evening, Feb. 25. Part of the annual Winterfest celebration, the event drew a large crowd, thanks in part to the serious smorgasbord of goodies and gear.

Admission was free, so long as you proved the app was downloaded to your smartphone. A table of student media swag greeted guests at the front door, including rad KRUA sunglasses and TNL knit hats. Kelly, Sam and other staff members were in the Den kitchen serving pizza and pouring cups of Broken Tooth root beer. The theme was Alaska hipster, including a hipster costume contest and performances from several indie folk bands, many of which featured a UAA student or three on stage.

TNL staff was equally committed to keeping the theme green (as in lime green giveaways like TNL Frisbees, notebooks and coffee tumblers). Green streamers and green Chinese lanterns lined the walls, pizza went out on green picnic plates. It was all in reference to the color of the app, which matches the hue of The Northern Light's masthead, which is in turn, of course, inspired by the radiant green gradient of the aurora itself.

Just download the app and stay abreast of campus news, opinions, scores and events. Search for "The Northern Light" in Apple's App Store or on Google Play. With a free download, you'll be on your way to fresh weekly content and extra bonuses like a campus map, exclusive deals and more.