This past weekend the Seawolf Debate Program sent two teams to Montego Bay, Jamaica to compete at the Pan-American Universities Debating Championship on behalf of the University of Alaska Anchorage. Both teams prevailed into elimination rounds, earning Quarterfinalist and Semifinalist awards and picking up four of the top 10 speaker awards of the nearly 200 speakers present.

The Pan-American Universities Debating Championship, hosted by the Jamaican Association for Debating and Empowerment, drew an international, bilingual field with schools from as far north as Canada to the southern Barbados. The competition featured six preliminary rounds of debate on topics ranging from development banking policy to the merits of war commemoration. While Alaskans, especially debaters, are no strangers to the challenges of travel, this particular trip certainly tested the Seawolves resolve and pushed their endurance. Due to several flight delays and re-routing, the team who left Wednesday night arrived in Jamaica nearly 34 hours later only to be make their way immediately into competition, whose start time had been held and delayed several hours waiting for the many competitors trying to get to Montego Bay from various U.S. cities.

Nonetheless, our debaters persevered and came out swinging. At the end of six preliminary rounds of debate the team of Matthieu Ostrander & Jacob Shercliffe were ranked 14th, and the team of Sarah Elton & Sam Erickson were ranked 2nd, earning then a spot in the quarterfinal round. Facing tough competition on the motion that student bodies should not seek to deny any speaker a platform on the basis of ideological difference, Ostrander & Shercliffe were beat out by two teams from Cornell University while the team of Elton & Erickson advanced and went on to earn semifinalist awards. While a team from Yale University was eventually crowned champion, the showing of all four Seawolf Debaters was so strong that they all earned a spot in top 10 speakers. Shercliffe & Erickson tied for ninth place, Ostrander took sixth, and Sarah Elton took third out of the 178 speakers present. 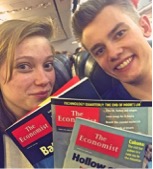 Sarah Elton & Sam Erickson show off their in-flight reading, debate research, as they make their way to Jamaica for the Pan-American Debating Championship

Jet-lagged, exhausted and proud the Seawolves returned home to UAA where they'll spend the next two weeks prepping for the United States Universities Debating Championship in Atlanta, Georgia April 11-14. In the meantime, the Seawolf Debate Program will also host a series of Pop-Up Debates, a community debate competition open to all, from March 30 - April 13th with a $500 Kaladi Brothers Coffee Gift Card up for grabs. To learn more about the competition, and any of the event Seawolf Debate has coming up, please visit our website at seawolfdebate.com.