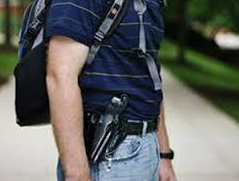 The final round of the 2016 Cabin Fever Debates, UAA's intramural debating tournament, will address a controversial proposals currently pending in the Alaska Legislature: should the University of Alaska be required to allow concealed carry of weapons on campus?

Proponents of the bill claim that the university is a public space, funded by and for the people of Alaska.  As such, the rights to carry a weapon guaranteed by the Second Amendment should protect individual's rights to defend themselves on campus.  Opponents are concerned that the mere presence of weapons on campus changes the nature and focus of the university, making honest and critical discussions more difficult.

The Cabin Fever Debates were established in 2006 to provide UAA students not active on the Seawolf Debate team an opportunity to try their hand at competitive academic debating.  Over 40 two-person student teams enrolled in this year's competition; the field has been narrowed to the final four.  Those four teams will meet in the final round to determine which will take home over $2000 in cash prizes.

A reception and awards ceremony for the winning teams in the 2016 Cabin Fever Debates will follow the final round.