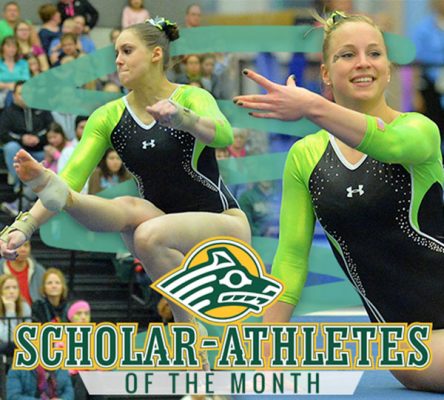 Strong and smart. Those two characteristics spring to mind when Simone Penker and Marie-Sophie Boggasch join the conversation.

I met both seniors in late April, right after the two Div. 1 gymnasts shared the honor of winning UAA's Dresser Cup, recognizing them for earning the highest overall GPA among Seawolf student athletes. Drum roll, please:  Simone and Marie-Sophie finished UAA with 4.0s, Simone in natural sciences and Marie-Sophie in professional piloting and aviation technology.

Simone heads off to medical school in the fall. Marie-Sophie will be back at UAA in August, continuing her job as flight instructor for another year. She's also eyeing the chance for more Bush flying experience in her final year in the United States.

A student is more than a GPA, and an athlete is more than her score in a particular event. The richness of their individuality is readily apparent when talking with these two scholar-athletes. But before we get to how unique each student is, let's talk about their many similarities.

As international students and athletes at UAA, they share many factors:

Now, here's what uniquely different about each one.

Marie-Sophie has her own small, red airplane, lovingly dubbed "My Little Turd." She has her commercial piloting license, her single engine seaplane rating, multi-engine land rating and instrument ratings for all of those. She remembers the day she earned her private pilot's license: May 27, 2013. 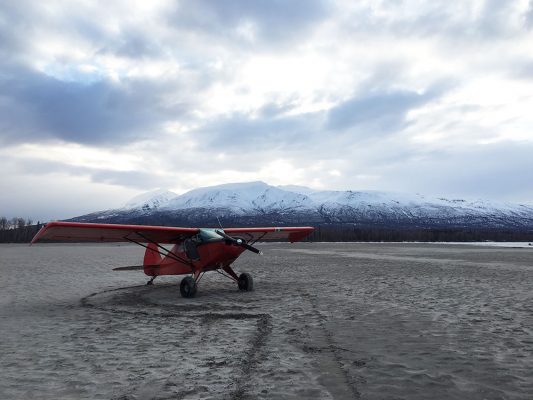 The next rating that she could work for, the ATP, or the airline transport pilot, is required for flying scheduled airlines. But, at the tender age of 20, she's not old enough to study and apply for it. Still, she could fly charters in the Alaska Bush, and she says she'd love to do that. 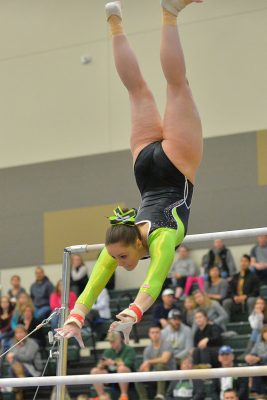 Marie-Sophie Boggasch excelled at bars and floor work. On the bars, "the flying around part is really nice," she said. (Photo courtesy goseawolves.com."

She's landed in lakes and on Alaska gravel bars, a huge thrill every time for her. She's flown as far north as Fairbanks, and as far south as Homer and Iliamna. She dreams of flying out of northwestern Alaska.  "Kotz[ebue]is really cool," she said. "From the pictures I've seen, and the destinations you can fly to from there, I think Kotz is one of the coolest places I have ever heard about."

You know the old saying: There are old pilots. There are bold pilots. But there are no old, bold pilots. Well, Marie-Sophie is a young, careful pilot. "I try to never push the limit," she says. "If the weather is bad, I won't go. Most of the time, you don't have to go."

For two years now, Marie-Sophie has been hired to help instruct students working for their private pilot's license. The day before we met, she'd been going for 12 hours, from 8 a.m. to 8 p.m., including her own classes and her job as an instructor.

"I really like to be there for my students," she said. "I remember being that student who wanted to get their private pilot's license before she went home for the summer. Some are really driven and they want to get it done. I try to accommodate my schedule for them. They need me." 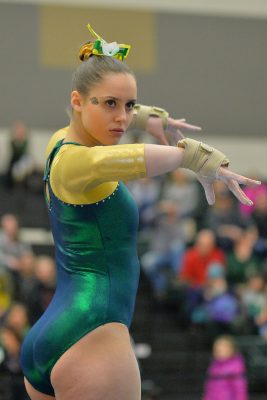 For all that bird-like flying freedom, you might be surprised to find out how she likes to relax. She says, "For me, a perfect evening is sitting at home eating good cheese (that would be imported European cheese) and playing board games. I love to play board games!"

I wondered if almost a decade and a half of gymnastics would be hard to say goodbye to. While she relished the opportunity gymnastics provided to "actually push myself to limits-it's not easy for me, I have to work hard at it," she sounds absolutely comfortable with her decision to retire. 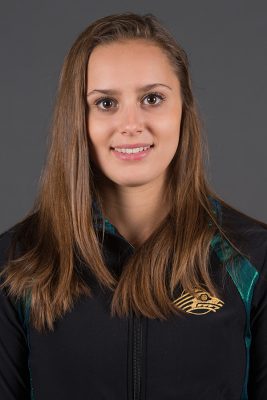 Choosing the sport in the first place was the best decision she ever made. ("I am here. I got an entire education in the United States because of gymnastics.") But choosing to retire now, she says, "feels great. By the time you are a senior, you are in pain. Your body hurts. I was prepared to deal with that, and now, I am prepared to let it go."

Both she and Simone say maintaining a fitness schedule will be very important for them in retirement. Gymnastics is such a high impact sport with repetitive pounding that they both realize strong muscles are necessary to keep their hard-worked joints stable.

The funniest thing about Marie-Sophie is that she knew she wanted to become a pilot "since I was about 4 years old, practically." By the time she was 14, her dad actually became a pilot for her so they could fly together while she was too young to pilot.

But UAA's aviation technology program was news to her when she arrived, discovered after the fact. Like a match made in heaven, she gravitated to the program and says she greatly appreciates the professors and the entire curriculum. It fit her goals exactly. During her senior year, she served as president of the aviation club, called Alpha Eta Rho, in UAA's Alpha Alpha chapter. The club is very active, visiting FedEx simulators and the JBER fleet, among many other actvities. "We planned something every two weeks" she said with pride. 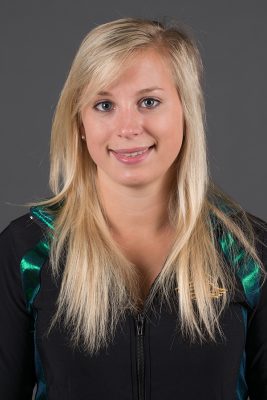 Simone Penker competed for the Austrian National Team before UAA, and represented Austria at international events in South Korea and China while studying at UAA. (Photo courtesy goseawolves.com)

She studied English in high school in Austria. She could read and understand the language to a degree, but didn't really speak it when she arrived in Anchorage. She comes from a very small town of several hundred people in Austria. Neither of her parents attended college or speak English. They've only been to Alaska twice - her freshman year to deliver her to UAA, and they are here this weekend to watch her graduate.

I asked both athletes what advice they might have for students coming behind them. Marie-Sophie declined to offer any; she said she thinks navigating through tough times is part of the reward for the individual. Each person has to make their way, she said.

Simone, on the other hand, is practically a therapist for her younger teammates.

"They asked me to be team captain last year and this year, but I really wasn't comfortable with that," she said. Instead, Simone has become "the emotional team captain."

"If anything happens, they come to me," Simone said. "I like helping people. And they know I am really objective about everything. I don't really form a bad opinion about anybody. I try to see the good in all situations."

While the list of troubles can range from boyfriends to roommates and academics, Simone said she's most skilled at resolving athlete-coaching conflicts, which are inevitable. 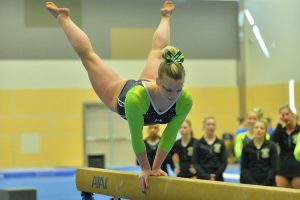 Simone has competed many times on the Austrian national team. Even while attending UAA, she had two amazing opportunities to compete for her home country. She qualified and attended the World University Games in South Korea, and the World Gymnastics Championships in China.

Her UAA coach, Paul Stoklos, coached her through the South Korea events. When she attended the competition in China, she worked extra hard to keep her grades up so thank Stoklos for allowing and facilitating that opportunity for her.

I asked Simone how she managed to balance athletics with her science classes, known for their additional long lab components. She smiled knowingly.

As basic as that sounds, she has the same philosophy today and it still works for her. She said she mostly studies alone or with one friend who has the same study habits as she does. 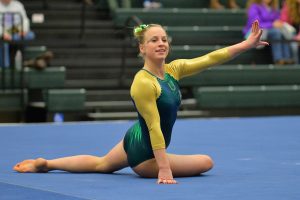 Sophie Penker competing against the Air Force in March of 2016. (Phot courtesy of goseawolves.com)

Simone said the hardest thing for her during her college career is happening right now-working to get into medical school. While she has been accepted at two prestigious U.S. schools, the tuition bills are more than she can manage. She has applications progressing in England and in Germany, as well.

She thinks neuroscience, neurology or neurosurgery may be her future path, though she knows many students shift after they start medical studies. She credits her biological sciences teacher Caroline Wilson with stoking her intense interest in this field.

Although these scholar-athletes are as different as they are similar, they do share one more common thread. Both are close to their families, and each one has a special connection to her father.

Marie-Sophie lost her father last year to cancer. Her eyes welled up with tears when she told me, but she also said she likes to talk about him.

She has a tattoo of her father's favorite mantra, "Eternity is now," so as to keep his wisdom close.

Simone, too, shares close ties with her father. She says he is a man of few visible emotions, but she came to realize his deep affection when he had to say goodbye to her as a freshman for a whole year. And in her junior year, he suffered a serious stroke. He has recovered well, fortunately. Simone was in Alaska and unable to go home for a visit. She turned her energies to studying the particulars of his ailment, learning and consoling herself that chances for recovery are good. She credits this family-related research effort to further cementing her passion to learn and understand human neurobiology.

Both students say they finish college with high regard for Alaskans, UAA and their many professors, mentors, coaches and friends.