The case of the Japanese backpack 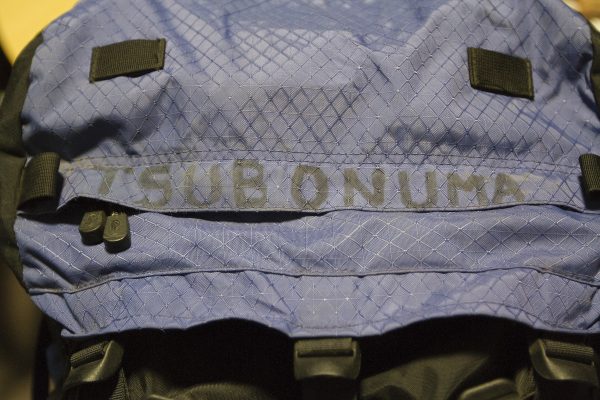 'Tsubonuma,' scrawled in Sharpie, was the first clue on the months-long quest to return this backpack to its owner 17 years after it was stolen near Fairbanks. (Photo by Phil Hall / University of Alaska Anchorage)

In 1999, a group of Japanese teenagers flew to Alaska for a summer trip in the mountains. After a few excellent weeks fishing in the rivers and camping in remote pockets of the state, they returned to a campsite outside Fairbanks to wind down the trip.

Two days before taking off for Tokyo, the group headed into town for one last supply run. That's when someone ransacked their camp, making off with thousands of dollars of gear, including four of the students' backpacks. Though it was an otherwise incredible trip, the students surely left Alaska with conflicting thoughts. 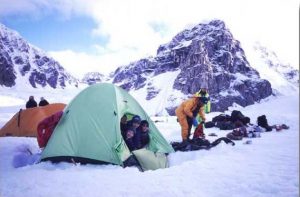 The 1999 Alaska trip--which included camping in the Kahiltna Pass, near Mount Foraker--was a big adventure for city kids from Tokyo. (Photo courtesy of Etsuko Tsubonuma)

Now fast forward to fall 2015. The owner of a secondhand store in Fairbanks decides to retire, clearing out his piles of trash and treasures. Deep within a 40-foot plywood trailer, he uncovers a violet-blue backpack stuffed with camping supplies and postcards written in Japanese script.

Seventeen long years later-thanks, in part, to the dogged dedication of one UAA professor-that backpack finally returned to Tokyo this May.

In August 2015, Anchorage resident Jeanne Ostnes received a call from her brother, the Fairbanks storeowner. He told her about a bag-a Lowe Alpine Contour IV with a plentiful 115-liter capacity-that was in remarkably good condition, aside from the word 'Tsubonuma' scrawled heavily on the exterior. He told her of the contents and Jeanne, who took Japanese classes at UAF, took on the case.

As a college student in 1973, Jeanne spent several months in Japan. Before leaving Alaska, she made arrangements with the Alaska Division of Tourism to present slides at different venues in the evening. One of these public presentations took place at the Alaska governor's office (yes, these were different budgetary times when the government could swing an office in Tokyo).

In the seats that night, enthralled by the wild slides of Jeanne's presentation, was nature photographer Michio Hoshino. At the time, Michio was just starting his heralded photo career, and he and Jeanne became fast friends. She invited him to visit Fairbanks and helped coordinate his early photo adventures in Western Alaska. When he died in 1997-a victim of a bear mauling while on assignment in Russia-she lost a close friend.

So when this Japanese backpack came her way-filled with dozens of film canisters-she thought it might have some connection to her photographer friend. Now living in Anchorage, she turned to UAA to help solve the mystery.

On Aug. 31, 2015, Jeanne sent an email to Hiroko Harada, Japanese language professor at UAA, to explain the situation. Within 24 hours, she was in Hiroko's office with the pack. "She got on it like a detective," Jeanne laughed.

The two pored over the bag's contents looking for clues. Most were dead ends-ruined film canisters, bags of clothes, a giant bottle of Kikkoman soy sauce. However, the unsent postcards were signed with a male name-Yu. Paired with the last name on the pack, they learned this bag didn't belong to Jeanne's friend Michio-they were digging through the camping supplies of someone named Yu Tsubonuma.

She started cold-calling the listed numbers, asking for info on Yu. The numbers (at least the ones that still worked) led to the parents of other students on Yu's 1999 Alaska trip. Most hadn't heard his name in more than a decade, and some didn't know him at all (students on the trip came from several different schools).

The calls paid off, though. In late September, one parent connected Hiroko with Yu's mother, Etsuko (whose contact info was in Yu's head, not his notebook). Etsuko, of course, was floored. 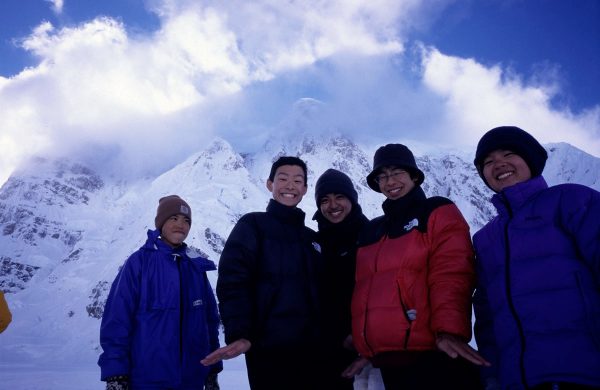 Yu and a few friends in the Kahiltna Pass. (Photo courtesy of Etsuko Tsubonuma)

But the backpack was still an ocean away from its owner. Jeanne and Hiroko contacted international shipping companies and Asia-bound cargo flights, but had trouble finding affordable shipment rates from Anchorage. They tried searching for UAA students bound for Japan over winter break with no luck.

In the meantime, they were eager to contact Yu. On a Saturday in March (Sunday in Japan), they bridged the 17-hour time zone difference via Skype, with Hiroko translating.

When asked for his thoughts on the backpack, Yu shook his head, smiling. "He remembered it right away," Hiroko translated. "It was just a surprise."

A continent away, Yu watched from his Tokyo home as strangers paraded his teenage belongings in front of a tiny webcam in Alaska. He said he was most eager to recover his pictures, with hopes some film rolls survived. He admitted it was a little embarrassing to have 17-year-old postcards intended for his relatives still in the bag.

Jeanne took the chance to apologize on behalf of her hometown. "I am very sorry this happened in Fairbanks, because it is the nicest town in all of Alaska," she said, adding, "the person who took it must have been someone from Anchorage."

After its discovery in August, contact with Yu in September and a Skype call in March, the backpack finally made it to Tokyo earlier this month. Hiroko was traveling to her home country to establish relationships between UAA and several Japanese universities and she brought the bag along. Etsuko, Yu's mother, met Hiroko at the airport May 9, and returned the backpack to her son May 12. 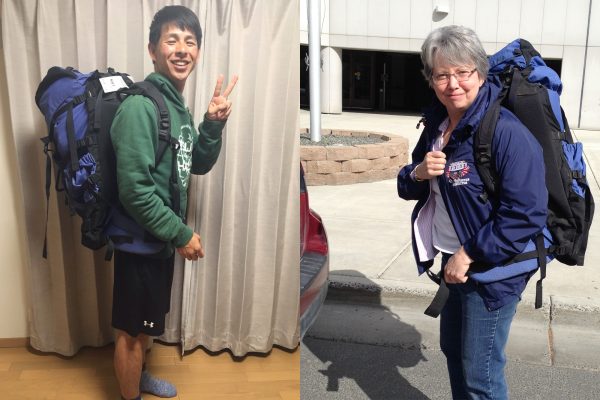 Jeanne dropped off the backpack with Hiroko outside the Admin/Humanities Building on May 8. By May 12, it had made it back to Yu in Tokyo. (Photos by Etsuko Tsubonuma, Hiroko Harada)

But so many unanswerable questions linger. Who stole it? And who dropped it off intact at the secondhand store? Why Yu's bag, and not his brother Kazuki's, who was also on the trip? Could there be three other backpacks still floating around Fairbanks? 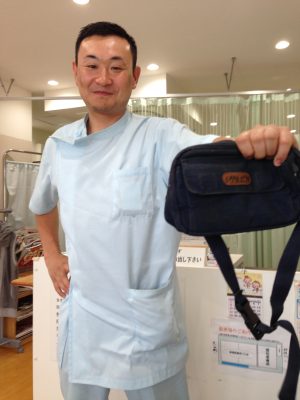 A mini-mystery solved: A pouch inside Yu's backpack belonged to Shigekazu Murai, who now runs an osteopathic clinic in Tokyo. (Photo by Etsuko Tsubonuma)

Yu-now a 34-year-old high school math teacher-has never returned to the U.S. Nor has he been out on another expedition like his visit to Alaska. He laughed when asked if he'd be taking the barely used backpack on any new adventures, noting that since he dived into math and education, he hasn't had much time in the great outdoors (good news, though: based on online reviews, Lowe Alpine Contour IVs from the 1990s have proven exceptionally sturdy).

"I am very pleased and happy that the backpack returned to me ... I never expected it would come back," Yu wrote from Tokyo last week. Though some items are still missing, it was still a wild experience rifling through what made it home.

"Each and every thing that returned ... [brought] back fond memories of the Alaska camp," he said.

"The case of the Japanese backpack" is licensed under a Creative Commons Attribution-NonCommercial 4.0 International License.