A career in medicine has been Tiffany Ma's goal since the summer after her junior year at East High, when she took part in UAA's health education program for teens. It took a few years, however, before Ma found her passion, pharmacy. At the time, she was working for a medical group in Texas while attending Baylor University. 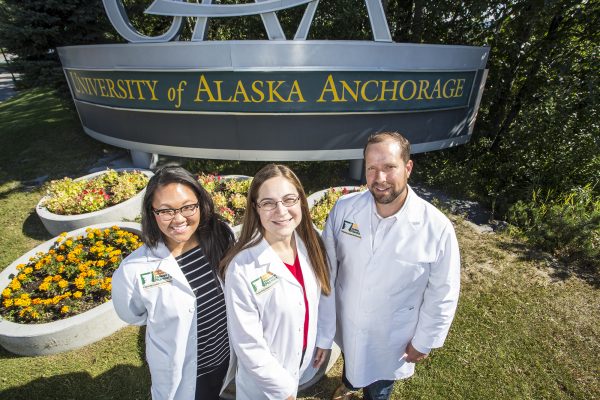 The UAA-Idaho State University partnership creates a home in Anchorage for students hoping to earn a doctor of pharmacy degree. Tiffany Ma and Janelle Solbos are students in the inaugural class, seen here with the program's director, ISU's Tom Wadsworth. (Photo by Theodore Kincaid / University of Alaska Anchorage)

"I was impressed by their vast knowledge of drug therapies and how vital a role they played in a patient's health and well-being," said Ma, who then enrolled in post-graduate courses at UAA, resurrected UAA's pre-pharmacy club and job-shadowed a Providence Alaska Medical Center pharmacist.

She wanted to attend pharmacy school but distance education through Creighton University's distance-learning program at UAA was the only option that would allow her to stay in Alaska for much-though not all-of her pharmacy education.

Then she learned UAA and Idaho State University had created a partnership setting up UAA as one of ISU's doctor of pharmacy-"PharmD"-learning-delivery sites. She enrolled and earned one of eight spots in the program's inaugural class-students receive their white coats in a ceremony next month and then will begin their pharmacy studies.

"I was beyond surprised and ecstatic to know I could possibly pursue a PharmD in its entirety here in Alaska," Ma said. "I also couldn't help but think about what great strides UAA was making by creating opportunities for Alaskans to stay in state and eventually work in their professions here."

Alaska has had a long-standing demand for pharmacists, particularly in rural areas. This need became even greater, due in part to proliferation of new medications and the aging baby boomer population, said Thomas Wadsworth, director of the UAA-ISU College of Pharmacy. "There became a greater need-not only in the distribution part of pharmacy practice, but also a clinical need in dealing with all the caveats and complexities of the medications."

There weren't enough pharmacists-or pharmacy schools-to keep up with the demand. Wages for pharmacists began rising from $20 an hour to $40 an hour and then, here in Alaska, approximately $60 an hour. Agencies were paying up to $150 to bring temp pharmacists to Alaska.

"People were desperate," said Wadsworth, who worked for four years at Fairbanks' Chief Andrew Isaac Health Center immediately after receiving his PharmD and later, during a residency at ISU, flew to Bethel a few times to work as a fill-in pharmacist.

"You could really write your ticket, go anywhere, get sign-on bonuses, loan repayments, especially here in Alaska in the rural areas."

In 2009, there were more than 100 pharmacist vacancies in the state, according to an Alaska Department of Labor and Workforce Development report. Responding to the critical demand, the Alaska Pharmacists Association and Alaska Workforce Coalition called for UAA to develop a pharmacy school here in Alaska.

A subsequent feasibility study highlighted difficulties: "They were going to have to have somewhere in the realm of 70 students per class to support a self-sustaining program," Wadsworth said. "And if they graduate 70 students in the state, they would rapidly suppress the job market."

With proliferation of pharmacy schools across the nation, and the recent recession, the number of pharmacist vacancies dwindled to 40 by 2012 and 17 by 2015.

A consultant offered two options: partner with a distance program or create a distance-learning program with a university in the Northwest that had multiple campuses delivering pharmacy education. 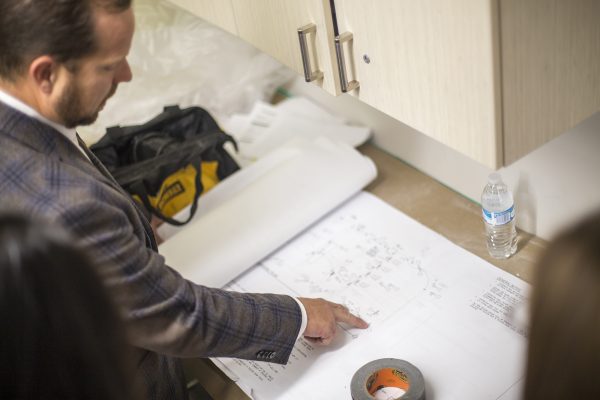 UAA and Idaho State University have joined efforts to provide a home in Anchorage for students who want to earn doctor of pharmacy degrees in Alaska. Here, Tom Wadsworth-ISU assistant dean for Alaska programs- visits the new student area being created in the UAA Professional Studies Building. (Photo by Theodore Kincaid / University of Alaska Anchorage)

UAA created a distance-education partnership with Creighton University, which reserves five seats for Alaska students. "It's a total distance program," Wadsworth said. "They do rotations locally but they don't have on-site professors."

UAA mailed a request for proposals to all the pharmacy schools in the Northwest and ISU was among the universities that responded.

"That's where ISU came in on it," Wadsworth said. "The reason it made sense with Idaho: Idaho is a rural state; our program is geared toward rural health; we have been doing multisite delivery for 20-something years and we have been educating pharmacists for a really long time-since 1918."

One ISU campus is located in Pocatello. Another is in Boise (Meridian). "Our proposal made Anchorage another delivery site," he said. "We would provide on-site faculty members here, and a dean."

The two universities developed an agreement.

"What ISU brings to the table, they bring the pharmacy program to the state with full socialization for the students," he said. "It's entirely different from a distance program. These students will have faculty members on site who they can rub shoulders with. That's a highly valuable part of their education. They're not just taking classes and then getting a degree. They're becoming something. They're becoming a pharmacist. We think it's important we show them how a pharmacist behaves, how they act, how they talk and how they collaborate with other health providers."

"That means they'll come to our lecture hall with a podium at the front," he said. "One day the lecture might be delivered here in Anchorage and broadcast synchronously to [Boise] and Pocatello. The next day it might come from [Boise] or Pocatello. The lecture could come from any of the three sites and the students receive it at the same time."

Students at the three sites can see and interact with each other via large TV screens and cutting-edge audiovisual equipment. "When a student actuates a mic in front of them, the camera focuses on the student," Wadsworth said. "When they let go of it, the camera stays on them until somebody else speaks. All the lectures are recorded and then posted for viewing. Students can watch those videos at their leisure. Labs are on site, and they'll do all their hands-on clinical work right here in Alaska."

Students will use UAA facilities and UAA's student services. "ISU brings the accredited program to them," Wadsworth said. "And they never have to leave the state. They're done."

Fourth-year students will do clinical rotations at places like Providence, Alaska Regional, Mat-Su, the VA, Fairbanks, Bethel, Nome and Kotzebue, and throughout their education, these UAA-ISU students will grow a net of connections throughout Alaska's pharmacists' community.

"We're hoping that means they'll stay here when they're done, and we'll place these students in jobs that are local," he said. "One of the problems in the pharmacy profession in Alaska is the high turnover rate-they stay 3-5 years and they either leave or dig in, and a lot of them leave. High turnover makes it really hard to develop tenure in clinical pharmacy programs at a facility. This model doesn't serve patients to the potential that we could. This really elevates the profession."

Wadsworth says the number of applicants this year was small due to the late announcement of the program launch-the agreement matured in May. "Pharmacy students are ambitious; they're like med students," he said. "They knew there wasn't a program here, so they had to go somewhere else to do it. Most had made plans and were already gone. Next year, we're expecting our applicant pool will double or triple."

Corrie Black discovered the world of pharmacy early in high school when she job-shadowed at a retail pharmacy in her home state of Oregon. 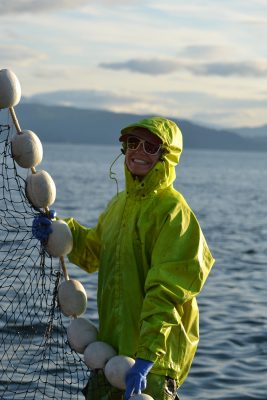 Corrie Black, who operates a commercial fishing business in Kodiak, will begin taking pharmacy classes through the UAA-Idaho State University College of Pharmacy partnership this fall.

"I initially thought 'counting pills' all day sounded boring," she said. "But I always had a fascination for science and an interest in health care. While doing graduate research in a radiochemistry lab, I was exposed to different avenues of pharmacy. This reignited my interest in the field and gave me a greater appreciation for how vast the opportunities are and how valuable the work of a pharmacist is."

Black married a third-generation Western Alaska fisherman she'd met in college. After graduating, they moved to Kodiak and bought and began operating a seiner.

Before buying the boat, Black completed a master's degree at Oregon State University in radiation health physics and, as preparation for pharmacy school, took an online anatomy and physiology class through UAA, "which worked well with our helter-skelter commercial-fishing lifestyle," she said. "The lab section even utilized a cadaver dissection computer program and several at-home dissections."

Black began looking at pharmacy school opportunities last year, first checking into OSU's program and, since she would have to relocate there or wherever she went, looked at other schools on the West Coast.

"It was then that I found ISU's program," she said. "I originally was semi-interested in studying there in Idaho until I saw on their webpage that they were starting a program in Anchorage. Staying in the state of Alaska seemed much more feasible and encouraged me to seriously pursue coming back to school."

Black hopes to explore medication therapy management, a sector of practice in which pharmacists closely monitor and adjust medications for individual patients with challenging conditions such as diabetes.

What does she hope to be doing in 10 years?

"I hope to be confident and competent in my skills," she said, "serving as a valuable resource for whatever Alaska fishing community we settle in."