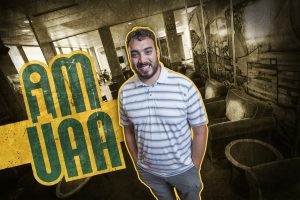 Pilots touch down floatplanes on out-of-the-way lakes. Biologists scan for king eiders from the banks. With jaw-dropping nature in every direction, few people in Alaska's wildlife refuges think much about the infrastructure that got them there.

Except for Chris Edwards, B.S. '11. As a construction project manager with U.S. Fish & Wildlife Service (FWS), Chris keeps the department's many manmade facilities in top shape across the state's wild lands. It's a job that takes him everywhere from Adak to Kodiak to Tok while he oversees the construction (and, occasionally, demolition) of FWS buildings, roads, trails and boardwalks.

Here in Alaska, FWS oversees 16 refuges that cover 78.6 million acres of land (why yes, that's just slightly smaller than the state of New Mexico). Some refuges are headline-grabbers in the national news (Arctic National Wildlife Refuge), some are prime spots for weekend warriors with dip nets (Kenai National Wildlife Refuge) and some are so remote you're more likely to encounter millions of seabirds before you see another human. 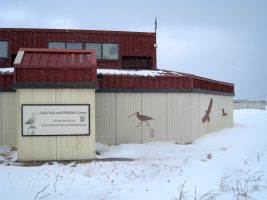 The shuttered visitor's center in Adak is one of many far-flung project sites for Chris in Alaska. (Photo courtesy of Chris Edwards)

It's the opportunity to see these remote locations-and be on-hand at the construction site-that first led Chris to construction management. A Service High graduate, Chris first turned to architecture and engineering, but soon learned how many in-office hours those jobs required. "I wanted to go into work and be happy every day," he said, "and the job site is really where I enjoy my work."

He took a year off school to reassess and mull over construction management programs out of state when, voila! UAA's Community and Technical College opened the exact same program here in his hometown. He reenrolled at UAA, graduating in 2011.

Just before his senior year, Chris started a summer internship with FWS (internships are a requirement of UAA's construction management curriculum). The experience-through the FWS Pathways program-led to a career. Chris ended up working part-time at FWS through his senior year and had a job waiting for him at graduation. He's been with the agency six years and counting.

But his experience isn't unique. "Most of my classmates had jobs before the year ended," he estimated, crediting the required internships. "In general, I think the [construction management] program is a great fit. Especially here in Alaska where we have a lot of construction." 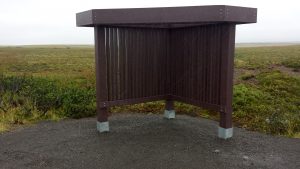 Projects in Chris's purview include everything from research facilities to boardwalks to this kiosk in Cold Bay, at the Izembek National Wildlife Refuge (Photo courtesy of Chris Edwards).

As a manager, Chris oversees a project from start to finish, including all the unique snags along the way-like portaging supplies across Russian River without a motor. Currently, he has about 25 projects in the air (most in state, but also two at fish hatcheries in deep rural Washington).

FWS is under the Department of the Interior, meaning there are many steps required to complete each federal project in the refuges. Chris, as the sole link on a project from start to finish, makes sure everything requested is delivered. He identifies the design team, he selects the construction team, he coordinates with the historic preservation staff and he makes sure the project sticks to a consistent vision and timeline as different parties enter and exit the project. His on-site presence is essential, whether the project is reinforcing a crumbling wall or a multi-year project like the Kenai Refuge's new visitor center, which opened in 2015.

Of course, this being Alaska, Chris is well versed in the unique problems brought by the incredible land. Obviously FWS operates in remote locations, and most refuge headquarters are off the road system in places like Dillingham, Juneau, King Salmon and Cold Bay. But at least those locations benefit from semi-frequent shipping. In Kaktovik, on the north edge of the Arctic National Wildlife Refuge, a barge only arrives twice a year with supplies. Good thing Chris appreciates a solid challenge.

A little bit of everything 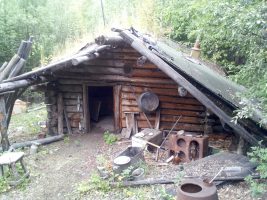 And here's one more shot from the work site, this time at an old trapper's cabin in the Tetlin National Wildlife Refuge visitor contact station, approximately 80 miles from Tok and 7 miles from the Canadian border (Photo courtesy of Chris Edwards)

Though he originally thought he'd leave the state to study construction management, Chris is glad he stuck with UAA. "I liked the mixture of classes here," he said, citing courses in AutoCAD, scheduling, technical writing, management and law. "You learn a little bit of everything."

In his eyes, construction management is a little bit of everything-a combination of business management and construction methods, with a dash of engineering. "I was able to use all three of those going into my position," he noted.

Every week, new projects roll into his docket along with their site-specific challenges. Currently his estimated 25 projects include replacing a boiler system in Bethel, installing two miles of sewer pipes in Kodiak and finding a home for a historic aircraft in Anchorage. And he'll have to visit each location to start and end the process.

Whether he's helping repair fences, provide storage space for kayaks or just keep the power running in remote pockets of the state, Chris's work in construction management ensures Fish & Wildlife biologists and researchers can continue the agency's mission: environmental conservation "for the continuing benefit of the American people."