Finding a way out of the state’s financial crisis, together

Seven years ago, Carla Burkhead moved to Alaska with her husband, who had just accepted a position on UAA's biological sciences faculty. After a few years, she came to UAA herself, to pursue a master's degree in public administration.

Burkhead says UAA College of Business and Public Policy is always seeking ways to connect students to 'real things that matter,' which led her to a class offered by Alaska Common Ground chair Cliff Groh.

"That tiny one-credit class really opened up my understanding about the deficit that exists, that we can no longer rely on oil to pay for government," Burkhead said.

Groh spoke about the fact that deficits happen, especially in Alaska's government, where Alaskans don't pay for it.

"Deficits are going to keep happening until we have a steady revenue stream," she said. "Then [M.P.A. Professor Sheila] Selkregg explained we don't have to be overwhelmed by this fact. Instead, we can view it as an opportunity to improve our government. I had this moment of clarity. That's where it really clicked for me."

Last fall, Selkregg introduced an initiative called Realizing Solutions: MPA Graduate Students Connecting You to Things that Matter, which she designed to engage students around current public policy and issues. 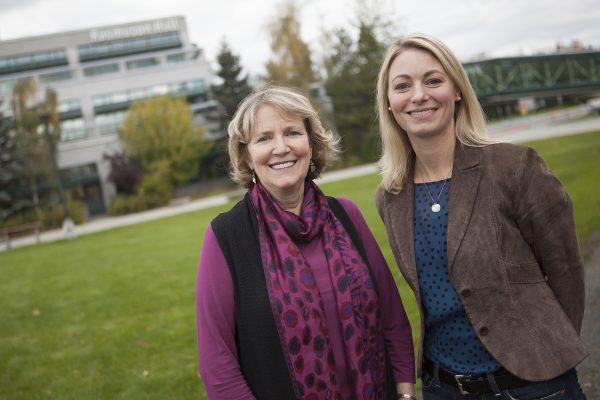 The first Realizing Solutions partnered with Alaska Common Ground and CBPP to focus on climate change. Burkhead participated. She then received a community-engaged student assistant award to assist Selkregg, Common Ground and CBPP in creating this year's free public forum Oct. 1, which focused on the state's fiscal crisis.

CBPP and Common Ground are trying to talk about how our values define what we see as a social contract between people and government, she said.

"We don't need to be victims," Burkhead said. "We should be optimists. Crisis brings opportunities for change. We don't have to be reliant on one form of paying for our government; we can expand our horizons, if we are committed."

The options: use taxes to start paying for government; cut the government and reduce some public services; reorganize the permanent fund; diversify Alaska's economy.

"The logjam that exists right now is a direct result of people's fear of moving past the problem and into solutions," Burkhead said.

Educating people on the mechanics of the problem and the elements of solutions were the key aspects of the seminar, Selkregg said.

"This is a political problem as much as a financial one," she said. "We have the tools to build a solution, but it is going to take compromise from multiple interest groups and it's going to require the public to engage in order to ensure the solution we broker is fair and reflects the public's values."

Alaskans had a "long run of so much money that we didn't have to pay attention to how it was being spent."

"Those days are over," she continued. "What we have to do now is pay attention-if we do that, there is a chance we could get a better government that truly meets our needs."

"Finding a way out of the state’s financial crisis, together" is licensed under a Creative Commons Attribution-NonCommercial 4.0 International License.