Getting prospective voters registered and engaged

It's that time again.

Candidates for all levels of political office are saturating TV and radio with catchphrases, and packing mailboxes with political fliers. All over social media, people are pronouncing their allegiance to Hillary, Donald or even Bernie, and sharing a steady stream of articles about their preferred (or hated) candidate's emails or health or tax returns.

UAA Professor Marsha Olson says some younger people may believe it's enough to be a social media activist who makes their voice heard via Facebook, Twitter, Instagram and other social media channels.

"They think voting is for their parents and grandparents, and that they're making change in a different way," Olson said. "What they don't realize is that they've got to combine that with voting."

Many young people appear to have some trouble understanding how critical it is to vote, Olson said, explaining that the 18-24 age range has the lowest voter turnout of all elections, "and it seems to be going down-it's gone down since 2008," Olson added. 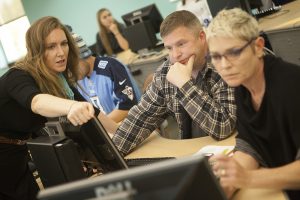 Students enrolled in Olson's Communication 111 class created a project in which they get out on campus to register people to vote and encourage them to go to the polls on election days.

Their effort is continuing this semester, with 75 students in three sections of Olson's class getting involved.

Oct. 9 was the deadline for people to register if they wished to vote on local issues in the upcoming Nov. 8 election, so Olson's students staffed voter-registration stations Oct. 3 and Oct. 5 at the Student Union and the UAA ConocoPhillips Integrated Science and Social Sciences buildings.

And, Olson's students will be working at those stations Nov. 7-the day before the Nov. 8 general election-to help people better understand what's on the ballot, find information about those issues and learn about candidates.

A $2,000 mini grant from UAA's Center for Community Engagement and Learning paid for Chromebooks laptops, which people can use to register online via the Alaska Division of Elections website or update their address or other information. The grant also paid for banners, T-shirts for student volunteers, stickers to hand out, brochures detailing how to register and congratulations for those who already registered.

The League of Women Voters is their community partner, providing volunteer registrars to support the students' effort.

"It worked out really well that we were holding those stations right before the April municipal election," Olson said. "The people who registered to vote those days weren't able to vote in April but those students who were already registered, we handed out League of Women Voters ballot reviews and my students talked to them about why it's important to vote."

"It came out of a general apathy among my students when it came to elections and being informed about issues," she said. "They also felt they had no control over their situation. There are a lot of budget talks going on, and they were hearing that and felt their university getting pulled out from under them and just felt like they didn't have anything they could do. The thing they can do is have a voice and vote."

UAA student Darcy Schoffstall describes herself as a "dog mom of two and a military spouse." She's also a part-time employee of an Eagle River dental practice who is taking Olson's communication class as a general education requirement for a degree in dental hygiene.

"I hope this project will draw attention to the importance of voting and draw more students to become more involved in their communities, in an effort to better our city and our nation," she said.

Educating voters was a key component of the students' project. One student created a map to help people find out the location of their local polling station, for example.

"It went really well," Olson said of spring semester's registration drive. "We registered 90 people and the students seemed to really enjoy it. It was a great opportunity for them to apply the skills we were learning in class into a real-world scenario, so it helps them retain the information and feel more successful about what they've accomplished in class."

Students from other UAA communication courses have also expressed interest in volunteering outside their classes to educate people about the importance of voting. "So they're going to go into classes and talk about it," Olson said. "That was a really exciting development."

Olson collaborated with student groups that expressed interest in wanting to encourage young voter registration and turnout. She's also putting together a lecture series with elected officials so they can come to campus and speak to students about what they do, what students can do to influence them, and what students can do to ensure their voice is heard.

"That's in the process of happening," Olson said.

Coming up: Seawolf Debate will host an Oct. 24 debate, part of the Arguing Alaska series that discusses local-to-the-state issues.

"We're trying to communicate to students these are things that are happening that will help you be educated about being involved," Olson said.

Overall goals: register, educate and encourage people to go to the polls Nov. 8.

"One of the biggest challenges we're running into this semester is that this presidential election has been long and painful and has played out in the media a lot," she said. "They're exhausted with it. Students said, when I introduced the project to them, 'I don't really like either candidate, there's not a point in voting. I'm not going to be happy either way.' I'm getting a lot of these messages."

What she's trying to do, Olson said, is convey how critical it is to step into a voting booth and fill in those ovals on the ballot.

"There's so much more to the election than just the presidential candidates," she said. "There's a lot of local issues that will be on the upcoming ballot, there's a lot of local elections taking place. It's more than just the presidential election. Even if you feel like that's not something you care about, there's so much more. That's not a reason not to vote."

"Getting prospective voters registered and engaged" is licensed under a Creative Commons Attribution-NonCommercial 4.0 International License.