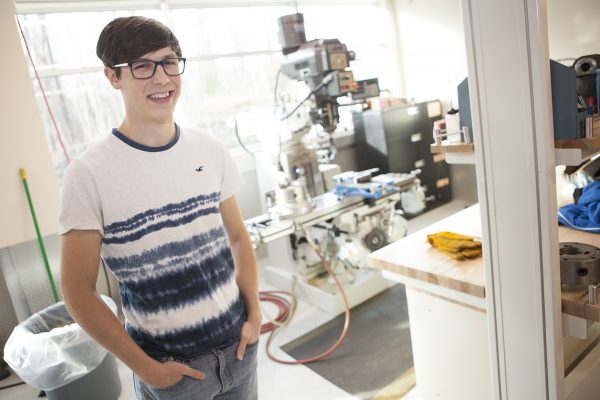 He calls Giuseppe Verdi his "homeboy", is the only mechanical engineer singing in the chorus of the Anchorage Opera, and can combine circuit boards, software and kinematics equations in ways that bring robots to (virtual) life.

In addition to the many hours he devotes to robotics, Elliott also sang as part of Anchorage Opera's chorus for Rigoletto in October, at the Performing Art Center's Discovery Theater.

And, he plays drums, takes photos, runs, swims, golfs, volunteers-traveling to Vladivostok as part of a Grace Christian School mission to visit churches and orphanages there-and can play flag football so nimbly he helped his team garner second place in Arizona's flag football championship while living there a few years ago.

Elliott was a small child when he began cultivating the interests that led him to robotics. His father worked as a mechanic for BP, fixing Rolls Royce turbines for power generators; he now works for Mistras Group, designing and building "crawlers" that X-ray pipes on the Slope. His mother runs a small preschool in Anchorage and his younger sister also enjoys robotics, participating in FIRST LEGO League (FLL) and FIRST Tech Challenge (FTC) competitions.

"My dad's been building stuff his whole life, like a handheld portable X-ray system," Elliott said.

While Elliott describes himself as a "pretty creative person," he says he wasn't particularly good at art, so he found other ways to grow and channel that creativity.

"When I was little, I'd make birdhouses, little cars with motors I found," he said. "The projects grew more complex and that's how I ended up where I am now."

Where he is now is at the helm of UAA's robotics club, which Elliott created with a UAA project management graduate student, Sean Gwaltney.

Why does robotics engage him so powerfully?

"I can make stuff that has meaning," he said.

Robotics is a branch of technology that deals with the design, creation and use of robots.

NASA uses robots to move and manipulate objects in space, and travel to distant places without the need for an on-board pilot.

The University Rover Challenge (URC) is one of the robotics competitions in which Elliott and other UAA engineering students have taken part.

"The competition, it's a lot more open-ended," he said. "You're not allowed to use hazardous materials or anything that wouldn't be able to operate on Mars. But those are your only limitations, along with the weight constraints, which makes sense because you need to be able to shoot it into space."

The team simply needs to make a rover that weighs fewer than 50 kilograms, is electric-powered, can complete all specified tasks and its budget for parts on the rover itself must be less than $15,000.

"This is the challenge, these are our requirements," Elliott said. "So how do we turn that into a successful rover. Sean Gwaltney was a lifesaver. Before he joined, really I was the most organized person on the team-which is not good, because I'm not an organized person. My gut instinct is always to be the person who goes, 'I'm just going to make this arm,' instead of standing back and saying, 'Let's wait a minute and plan things out so it works.'"

As soon as Sean joined the team, Elliott said, "He started making all these matrices and work breakdown analyses and charts. It's super great."

Before the URC competition itself, Elliott said, the club must raise and manage funds, design the rover, complete a critical design review that proves the team is fit for competition and devise logistics for the project. One team Elliott leads deals with mechanical tasks; another team (headed by UAA student Dustin Mendoza) takes on electrical tasks associated with the rover itself.

"Once you get to mechanical, you break it down into chassis and arm," he said. "Then you break it down even further into the joints we're going to use, the suspension system, what wheels will we have, what motors. You just keep getting lower and lower level: We need to buy this part, we need to construct this out of aluminum, we need to water-jet this piece."

A self-described control freak, Elliott says he is learning how to delegate tasks.

"You want to make sure everyone's on the same page," he said. "One of the most important things I'm finding in leading a team is making sure everyone sees how their part fits into the bigger picture. That's key to making the entire thing work. It makes people a lot more motivated to strive for success, helps them to be more successful because they know not only the requirements but they know why those are the requirements."

What value does a robotics club have in the context of an engineering education? Why is this tinkering important?

"Yes, we are making cool things and it's really fun," Elliott said. "In the two months we've been working on this URC project, I've learned more about project management, delegation and teamwork and how all the aspects of a business work than I ever did in my 14 years of school."

One of the reasons for that, he said, is that UAA Robotics Club is run like a business. "Our club is pretty much a startup-all these projects that have this idea, are raising funds for it and then have a deliverable," he said. "That's the entire engineering process."

Established engineering firms give a goal, give a project to work on, request a design and a reason to fund the project and touch off the process of completing it.

"We have a problem that needs to be solved-UAA needs to have a successful and competitive robot for the Challenge-and we go about solving that problem, getting our deliverables out," Elliott said. "That concept of having deliverables is big in the engineering world. That's really all the customer cares about and all your boss is going to care about."

"The URC is going to be the most valuable part of my college experience here at UAA," Elliott said. "It's the only way that I as an engineer can actually apply these concepts I'm learning in class-solving all these statics equations, these thermodynamics problems. It gives me a reason to apply them and it shows me how they're used in the real world, makes me figure out exactly how to apply them. It looks great on a résumé, too."

"You can have a student who performs super well in school, all A's, does all their work, but that doesn't translate to actual success in the workplace," he said. "It's a good way to see if someone is a hard worker or if they are a bright person, but those skills are very different from skills you'll need to succeed as an engineer."

Working on the rover has helped Elliott broaden the scope of the math and engineering skills he learned in class.

"You see they really are building blocks to the success of your rover," he said. "I've already done tons of statics problems working on this project just figuring out the strains our suspension's going to be under, how strong we need to make the springs on our shocks, how thick we need to make the walls of our chassis so it doesn't break. These are all problems I learned how to solve in statics, and now I'm learning how to apply them."