UAA occupational therapy: ‘I want to be part of that’ 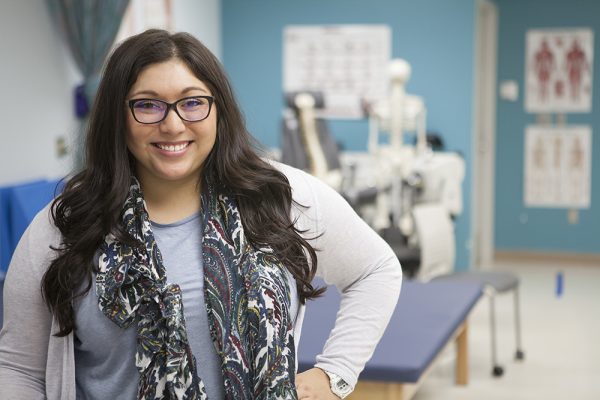 Finding a career in medicine has always been Jacqueline Solano's goal. Nursing was her original career choice when she started college. As a certified nursing assistant, she spent a summer working at Providence Alaska Medical Center's transitional care unit and met a patient who changed her life-a woman in her late 60s who had just had a stroke.

"I really fell in love with her," Solano said. "She couldn't really do anything with the whole left side of her body. She had adaptive equipment she needed for her hand, her leg, for eating-built-up spoons, a food guard around her plate to assist in getting food onto her utensils. I wanted to cry. Imagine having to be waited on, having someone feed you, dress you, move you-being so vulnerable."

Occupational therapists gradually brought the woman back to having a closer-to-independent life. Then, it was time for her to go home with her supportive family.

"I was like, 'Look at these people! They did that for her! I want to be part of that,'" Solano said. "Physically being able to see the difference, it was really cool."

What exactly is occupational therapy?

"Physical therapy helps you move your body," Solano explained. "Occupational therapy helps you put those motions into meaningful action. How can we make your life easier? Can we give you adaptive equipment, techniques or different ideas? We want you to be able to do all the things you want to do, as independently as possible."

UAA's partner, Creighton, is a Jesuit Catholic university located in Omaha, Neb. It launched the nation's first entry-level occupational therapy doctorate program in 1999 and has since reached out to form its distance initiative partnership with UAA (2008); a Greater Omaha distance initiative in 2013; and a collaboration with Regis University in Denver in 2015.

Students take full-time course loads each term, using an on-campus "apartment" outfitted with a bed, toilet and living room. The apartment and adjacent classrooms are stocked with wheelchairs, canes, tools and utensils. There are five instructors; labs are held on UAA's campus; and clinical internships take place during the second and third summers.

"The apartment was developed with the mindset that clients are often treated in a home environment, and often in a rehabilitation center with the intentions of returning home," said Diana Steer, Creighton/UAA occupational therapy academic coordinator.

"These individuals need to live as independently as possible, and hopefully return to a productive life," Steer said, adding that the apartment will serve as a classroom not only for the occupational therapy doctoral students but also for students of future rehabilitative therapies such as the UA physical therapy assistant program.

Students who complete the program receive an occupational therapy doctorate from Creighton University and are eligible to sit for the National Board for Certification in Occupational Therapy examination.

Solano is in the midst of her first semester.

"We've gone over basic assessment tools: blood pressure, pulse," she said. "If you went in to see the doctor, what the first person would do."

Solano helped out at a health fair in Girdwood-"Which I love, really getting out with the public, helping out." And, she's preparing to job shadow with an occupational therapist in Mat-Su: "She has her OTD from Creighton as well," Solano said.

Moving back into normal life

OTs can work with the tiniest infants in the neonatal intensive care unit to adults facing the challenges of old age.

"The big emphasis settings are probably pediatrics and physical rehab," she said, "but it encompasses everyone."

In a NICU setting, Solano said, what's important to a baby is eating, perhaps breastfeeding techniques, making sure they don't have a swallowing issue or a problem with their tongue that keeps them from getting food.

Occupational therapists help people who are having difficulties with movement of various kinds.

"In a school setting, that might be if you're having trouble with handwriting, scissor cutting," she said. "I shadowed here at a local elementary and there was a second-grader with cerebral palsy. One of her goals was to be able to put on her snow gear as fast as all the other kids. The therapy session was 30 minutes of toning and strengthening exercises as well as the activity of putting on the snow gear."

That girl progressed to the point where she was able to put on all of her snow gear in about 8-10 minutes.

"Her therapist told me when she originally started coming for therapy, it took her about that time just to put on a jacket and mittens," Solano said.

Occupational therapists help adults conquer a multitude of challenges-from spinal injuries suffered in a car crash to recovering from a stroke to learning how to perform tasks after having an amputation to creating a system of sticky notes, alarm clocks, journaling and list-making to keep Alzheimer's patients on track.

"That's what I love about OT," Solano said. "It's so diverse, so encompassing of everything."

OT students learn creative ways to help their patients access items or substitutes for items they need to learn or enhance physical skills.

The program offers a curriculum that dovetails with training "fieldworks."

"The first one has to be in mental health, so we'll do that at Alaska Psychiatric Institute (API)," she said. "The second one is physical rehabilitation, and the third one has to be at a pediatric clinic, because that's the semester we're learning about [pediatrics]. As you're learning things, you're getting on-site training. You can see things firsthand: 'Oh, I knew this and this is how it gets implemented.' Or, 'I didn't know about that' and you go back to studying and learn more."

Solano is most interested in researching hand therapy but she and others in her research group are more likely going to explore strokes, traumatic brain injuries and associated rehabilitation practices.

"Reaching the goal of having an OTD for me means I will possess the didactic necessities as well as practicum skills needed to join a health profession I love," she said. "I'll be able to help people, and change lives for the better."

"UAA occupational therapy: ‘I want to be part of that’" is licensed under a Creative Commons Attribution-NonCommercial 4.0 International License.