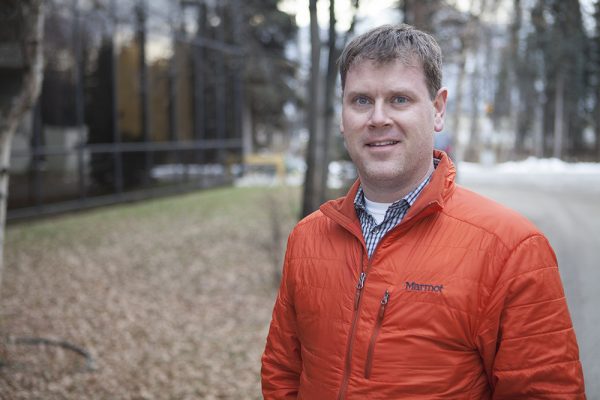 David Weaver has cultivated deep roots at UAA. As a student, he engaged with people in the Anchorage community through service-learning projects with the Mountain View Boys and Girls Club, and participated in Alpha Kappa Delta (Sociology Honor Society) and the Sociology Club before graduating with a bachelor's degree in sociology in 2003. David then joined the Peace Corps, serving as an educator at a small public university in a rural area of Albania. He subsequently earned a master's degree in economics at Western Illinois University before returning to UAA in 2008. He's served as director of the Office of Student Affairs, project coordinator for MAP-Works-a comprehensive retention and success program for first-year students-and now helms University Housing, Dining and Conference Services. Three years ago, he discovered a way to get unused meals from meal plans UAA had paid for to campus organizations-Student Health and Counseling Center, Care Team, Multicultural Center and Camai Room-that could provide the meals to hungry students. David has not only grown a career here at UAA, he married a fellow UAA alumna, Sarah, B.S.W. '01, who now works at Providence as an occupational therapist: "My wife and I have been married for 15 years and have two brilliant daughters, Kaya, 6, and Lily, 3. We love camping, traveling, and biking with our girls."

When did you first become connected with Alaska? I came to Alaska in 1977. I was just about to turn 2.

What was your experience growing up, and how did it influence you? My dad struggled with mental illness until he passed in December 2000 (finals week during a fall semester, as a matter of fact) and I was raised mostly by my mom in a working-poor household. This experience was profoundly important as I became an adult, and why I think I developed a strong sense of empathy for children in difficult situations, especially those who've experienced abuse or neglect.

Two years ago, you became a CASA volunteer with the Alaska Office of Public Advocacy. What does that work involve? CASAs are court-appointed special advocates that volunteer on behalf of a child navigating the adoption or foster care system. My case involves two amazing brothers who now are on the brink of a really great permanent adoption placement.

When did you first become interested in volunteering for service organizations? I remember in elementary school loving the Alaska Native dancers and Alaska Native music we would often hear at school assemblies. At a pretty young age, I was interested in other cultures, food, and languages. In my early 20s, I volunteered with the Anchorage Literacy Project, teaching English to adult learners from other countries. I was almost done with my undergrad then, and my wife and I began thinking seriously about Peace Corps.

Why did you decide to earn a degree here in sociology and how did that prepare the ground for your decision to join the Peace Corps? During my first few years as an undergrad, I felt out of place on campus. I didn't have much academic self-confidence as a first-generation college student, and didn't know how to seek help from teachers, advisors or counselors. I didn't know what I wanted to do as a career and had no real major in mind. The two people that invested in me were both first-year sociology professors-Sharon Aragi, and Karl Pfeiffer. I wouldn't have made it through my undergrad without them. They are the main reasons I fell in love with social sciences.

What most struck you about your work and experiences in Albania? The people were incredible, the ethic of hospitality and kindness toward guests was something I'd never experienced before. My wife and I have been back several times since 2006, and we plan to go again with our daughters this spring.

What prompted you to study economics after you returned from Europe? After living abroad in a developing country, I became really interested in macro-level solutions to social problems. Political corruption was clearly waning in Albania, and the strength of civil society was improving. I just wanted to learn more about how economic growth was positively affecting social change there.

What goals did you set for yourself and your team while you were leading MAP-Works at UAA, and how did you go about achieving those goals? Through my own experiences as a struggling first-year student, I wanted to work with staff and faculty to try and change a fiscal-year retention strategy from one that reacted to student outcomes, to one that could use data to predict dropout and-through data-driven and caring outreach-ultimately intervene before the struggling student leaves the institution.