The position of professor emeritus or emerita is the highest honor UAA's chancellor can award to a full professor. At fall commencement, Dec. 18, Professor Robert McCoy and Professor Bjartmar Sveinbjörnsson received emeritus distinction. 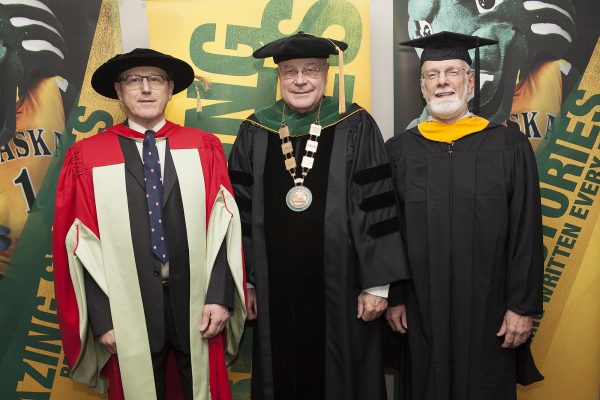 Professor McCoy has served the University of Alaska since 1973. He has served with UA presidents on UA statewide task forces and planning committees; provided community service through his work for the Anchorage Fire Department; worked with Student Orientation Services to assist Alaska Native students in transitioning into life at UAA; and received numerous awards for his work in the classroom.

Math began weaving into Robert McCoy's life when he was very young, as his parents introduced him to religion and the concept of God. 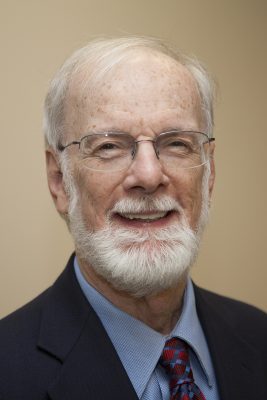 UAA Professor Robert McCoy was honored Sunday with the distinction of being named Professor Emeritus of Mathematics. (Photo by Philip Hall / University of Alaska Anchorage)

"I was told he was infinite," McCoy said. "Then when I first started learning about numbers, the natural counting numbers, and became aware they were infinite, all of a sudden I realized, God was all about numbers, he made numbers."

McCoy's family moved to Scotland after his U.S. Army Air Force cryptographer father was stationed there. That's when, at age 7, he again glimpsed the texture and shimmer of math.

"I saw my dad pouring some liquid into a container and it created these bubbles, and I was watching these bubbles expand and I was really interested in the different rates at which they were expanding," he recalled. "I thought, I've got to figure that out one day."

Numbers became his life's work, his amusement, his great love-aside from his family, which includes his daughter, Jennifer, a UAA alumna, and McCoy's 18-month-old granddaughter, Allison.

And for more than 40 years, McCoy has shared that great love with an estimated 20,000 students who have moved through his classes here-many satisfying general education requirements on their way to careers in engineering, chemistry, business, statistics and exploring the intricate crannies of math itself.

Math infuses every idea in the philosophy books McCoy pleasure-reads. Math commands the arrangement of notes he plays on his trumpet and French horn. Math articulates the patterns of every leaf, every pinecone, every branch and every spider's web he's seen on countless hiking and rafting trips he's taken in his native California, Idaho and his home of nearly 44 years, Alaska.

"The more abstract something is, the easier it is for me and the better I enjoy it," McCoy said. "When I was a lower-division student taking calculus, I was getting B's and once in a while, even a C. My professors would say, 'Don't become a math major, it only gets a lot harder in upper-division work,' but I didn't believe them. And I'm glad, because it was like I changed my major in upper-division work. It was what I knew was really out there. It wasn't all this mechanical stuff-it was these subtle abstract ideas. My grades went from B's and C's up to A's, which they found astounding because it's usually the other way."

McCoy has always sought to highlight for his students the splendor of all of math's dynamic facets, patterns and structures, bringing the abstract to life by describing how he used math skills while providing technical support for classified satellite operations at the U.S. Air Force Satellite Test Center and, later, drafting cost-engineering analyses and reports for Bechtel Inc. during construction of the trans-Alaska pipeline system.

"I don't teach mathematics just as an accumulation of facts and isolated skills," he said, "but as a living, breathing body of thought affecting how one can approach questions in any area of speculation."

Dr. Sveinbjörnsson arrived at UAA in 1980 to teach in the Department of Biological Sciences and guide graduate students through research projects. His own research relates to arctic and boreal ecosystems, plant ecology and, in particular, the effects of changing climate on taiga and tundra. In addition to advising the media on issues tied to ecology and global change, Sveinbjörnsson has, for more than 16 years, served as honorary consul for Iceland.

Bjartmar Sveinbjörnsson found disappointment when he first arrived at the University of Iceland in 1972. He'd earned a degree in math and sciences and wanted to delve into biology, but UI didn't offer biology, and its history and geography offerings disappointed him. 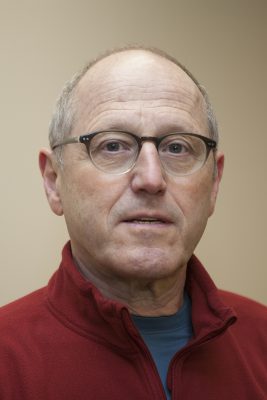 UAA Professor (and outgoing ENRI director) Bjartmar Sveinbjörnsson was honored Sunday with the distinction of being named Professor Emeritus of Biological Sciences. (Photo by Philip Hall / University of Alaska Anchorage)

"I had thought I'd get history taught from an anthropological perspective but instead it was just the same stuff with the kings, the classical wars," he said. "In geography, it was rote memorization: where are the mountains, where are the main rivers, who produces the most wheat. I was really depressed about my studies and thought about dropping out of school."

One day, the university introduced a "new studies" program, with speakers giving presentations. Sveinbjörnsson walked from one lecture hall to another.

"Up on each stage was a table with a green cloth, very old fashioned and foreboding," he said. "Someone would be at the podium in each room. Then I came to this room and there's a guy lying on top of the table with his hand under his chin, talking. I thought, 'I'll check this out.'"

The reclining man was talking about a new curriculum being started that fall in biology, an idea germinating because of a need for biology teachers in secondary schools.

"So I decided to try that out," Sveinbjörnsson remembered. "I can only liken it to what I imagine people go through when they get religion from a preacher, because it just consumed me. Instead of being a student who was just trying to get by, I spent all my time on it and really did well."

Fast forward to 2016. Sveinbjörnsson is a professor of biological sciences who served as director of the Environment and Natural Resources Institute at UAA.

Sveinbjörnsson first came to Alaska via his graduate studies at McGill University in Montréal. His five years there included two summers of Ph.D. work in Barrow.

"My wife and daughter came with me the second summer I was in Barrow," he said.

His postdoctoral studies took him to Sweden, and then, a few years later, he spotted a magazine ad about a position at the college that later became UAA.

Sveinbjörnsson's work focuses primarily on the effects of environmental shifts on treelines, edges of the habitat in various areas (and at varying elevations) where trees are capable of growing.

He's worked-and continues his work-on National Science Foundation-funded and other projects looking at how factors like increased snow depth, increased air temperatures, higher levels of carbon dioxide, insects and drought affect these areas and the plants and animals that live there.

Sveinbjörnsson twice served stints as chairman of the Department of Biological Sciences and, from 2012 until 2016, helmed the Environmental and Natural Resources Institute (ENRI).

"After 36 years, many of my best friends in this town are former students," he said. "I've always had students from my classes working with me and my graduate students. That synergy is what makes a university great. It's important to create new knowledge, not just disseminate already-acquired knowledge. Asking the questions and trying to figure out new ways to answer them is a very big part of being human."