In a wild state like Alaska, biology research is just a backyard away.

On a frosty winter afternoon, as the winter sun skimmed nearby barren treetops, a wader-clad crew of UAA students stepped into a lake to pull fish traps from a break in the ice as steam curled off the water. It could have been anywhere in Alaska. But it was Cheney Lake, a city park embedded in an Anchorage east side neighborhood, a short drive from campus and a stone's throw from the neighbors' back decks. 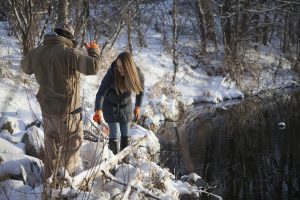 Kenneth Sparks and Ruth Isenberg collect threespine sticklebacks at Cheney Lake. Their research projects are funded by the National Institute of Health. (Photo by Phil Hall / University of Alaska Anchorage)

This hyper-local research will have national implications, as the students involved are part of Dr. Kathryn Milligan-Myhre's microbiology lab, funded by a National Institutes of Health (NIH) research grant. The team includes a professor, four undergrads, one graduate student, a technician and a post-doc, all working to better understand how genetic differences shape the human immune response to microbial communities. Their means of research is a ubiquitous and unlikely critter called the threespine stickleback.

These resilient fish boast numerous features helpful in scientific research. They're genetically variable (unlike, say, lab-raised mice) and mature relatively quickly, allowing for multigenerational experiments in a short time. Most importantly — and most surprisingly — these centimeters-long fish have significant parallels to humans. 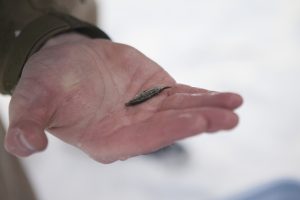 "Our gut physiology is very similar," explained Dr. Emily Lescak, a post-doctoral researcher in Milligan-Myhre's lab. Both fish and humans, she explained, host similar microbiota-communities of useful bacteria that boost the host's immune system. "There are a lot of similarities in our genetic pathways," she said. "What we learn by studying stickleback — which are a lot easier to study than humans — can be very directly translated to help our understanding of issues of human health."

With that in mind, the NIH is funding Milligan-Myhre's research — $300,000 over three years — to gain a better understanding of how genetic variation in a population affect immune systems and microbiota. The NIH grant program specifically supports biomedical research in underrepresented areas, like Alaska, and includes stipulations to support undergraduate research.

Several of Milligan-Myhre's students are eying medical school, and her lab is providing the first glimpse of possible research routes. "[Research] is such an essential part to developing medicine," said Haley Miller, a natural sciences major. "It's been a really great experience."

Like salmon, threespine stickleback live in both freshwater and the ocean; unlike salmon, strong storm surges and immense high tides can sweep these tiny fish inland, allowing them to colonize freshwater ponds across the state. For example, Lescak — who earned a Ph.D. in fisheries from UAF — wrote her dissertation on stickleback populations in Anchorage ponds formed by the 1964 Good Friday Earthquake; "In less than 50 years, they can morph into these freshwater populations," she explained.

As independent stickleback colonies grow, they adapt to the unique features of their specific environments. The students in Milligan-Myhre's lab are comparing genetically variable populations to see what microbes are present in fish, in what quantities, and how the immune system responds to the presence of these microbes. 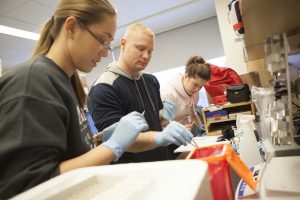 The stickleback is of wide national interest, and biologists flock to Alaska each spring and summer to collect samples for their labs in the Lower 48. UAA students, though, barely have to travel. In addition to Cheney Lake, their research covers familiar spots like Westchester Lagoon and several waterways surrounding Talkeetna.

At each lake, some students transfer specimens from fish traps to aerated coolers while others check the acidity, salinity and temperature of the water. Back at the lab, students split into various workstations, sliding behind each other as they run tests and record results.

By comparing each fish to the unique composition of the lake where it lived, they hope to discover how environmentally driven genetic variation affect a community's immune systems. If certain environmental conditions — like the presence of tetracycline, a natural occurring compound used heavily in prescription drugs — give an advantage to hosts with different genes, or if certain genes weaken the immune system to make the most more susceptible to diseases, those findings could illuminate why humans react to antibiotics differently, and whether gut microbes in humans correlate to disorders like autism and obesity.

Milligan-Myhre, who studied stickleback at University of Oregon, appreciates the access of researching in Alaska. In Eugene, she would have to call Alaska biologists and give very specific instructions of what she needed, then wait months for samples to arrive. Now, she says, "If I want to get more fish, I go out to a local lake... It's just been a wonderful place to do this work."

But for her, there's another benefit to researching in her home state. An Inupiat originally from Kotzebue, she hopes to inspire Alaska Native students to pursue science research that improves their communities.

"One of the things I really want to stress is the importance of Alaska Native students doing research that affects Alaska Natives," she said. Just like stickleback, human populations have genetic variation; findings from her lab could lead to more targeted health treatment for specific populations in Alaska.

Despite its national funding, Milligan-Myhre's lab is distinctively tied to Alaska, both in terms of research and results.

"I came up here because the stickleback populations are here, and I wanted to reach Alaska Native students and get them excited about science," Milligan-Myhre added. "I'm really happy in both aspects."