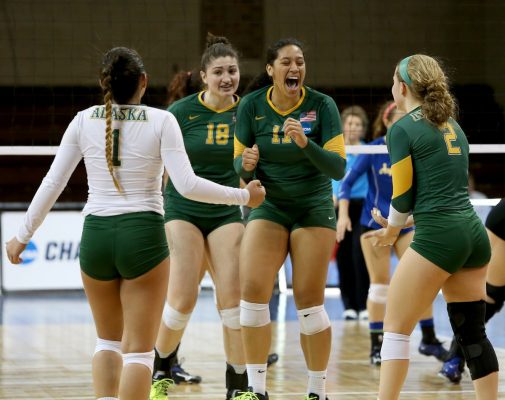 The UAA volleyball team celebrates after their 3-1 win against Angelo State during the 2016 NCAA Div. II Volleyball Championships in Sioux Falls, S.D.

Following a four-set victory over Angelo State, the UAA volleyball team has advanced to the NCAA Division II semifinals in Sioux Falls, S.D. Up next, the team will face off against the winner of a match between Palm Beach Atlantic on Friday, Dec. 9, at 2 p.m. Alaska standard time.

Fans in Anchorage can watch the game for free at the Alaska Airlines Center. The game will be broadcasted live on the Jumbotron beginning at 2 p.m. Come howl for the Seawolves as they compete for a spot in Saturday's national championship game. A concession stand will be open for food.

The game will also be live-streamed at ncaa.com.