The 1,100 members of the Class of 2016 have finished their educational quest-those participating in Commencement on Sunday now possess their hard-won diplomas. The graduating class has 17 students who graduated with more than one degree, and seven graduated from more than one college.

View a slideshow of the festivities. 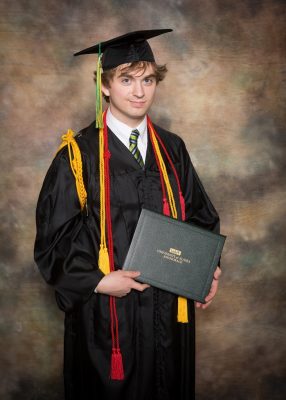 One of the students earning more than one degree Sunday was Iain Miller, who accepted both a bachelor of arts degree in languages (with a Spanish concentration, specifically) and a bachelor of science degree in natural sciences.

Earning two degrees would be an incredible accomplishment for most people, but Iain's feat is even more impressive since fall commencement is the second he walked in this year: In May, he accepted an additional two degrees: a bachelor of science in biological sciences and an associate degree in fire and emergency services technology.

"I've been told I may have a record for the number of credits in the system, but I don't know if that's official," he said Thursday.

Earlier this year, he plowed through all of that studying for his degrees and an associated four minors, while working 60 hours a week and tending two funded research projects.

He also held a spot in UAA's University Honors College, served as an officer in UAA's PreMed Club, and job-shadowed here and in Bethel. And he might just be eligible to graduate with an associate degree from UAS as well.

"As far as UAA is concerned, they're finally rid of me as of Sunday...for now," he joked. "I've said that before though — obviously I'm a glutton for punishment!"

His plan? Grad school first, then medical school — after taking the MCATs, he hopes to attend WWAMI — with the goal of becoming an emergency room physician.

"Everything will be essentially interdisciplinary," he said of his graduate school plans. "I want to study health disparities in the Arctic, and how access to health care with underserved populations can be improved. That's where my passion is." 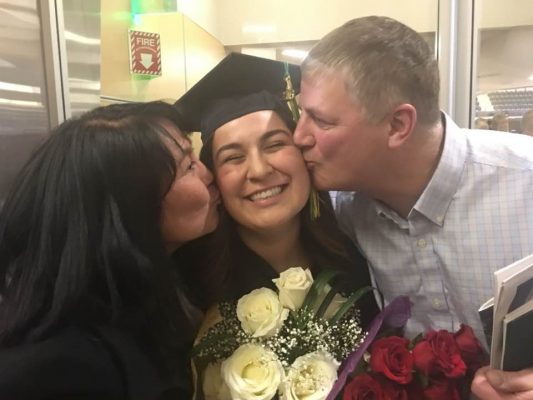 Kira Eckenweiler accepted her bachelor of music degree in music performance at Commencement, after a college career packed with vivid, powerful performances in her chosen discipline, opera.

Recently, Kira sang in the UAA Opera Ensemble and Anchorage Opera's An Evening of One-Act Operas — Savitri & Dr. Miracle. Last year, she unleashed her satiny voice at An Evening of Opera in Nome, at Oberlin's elite opera intensive in Italy and while playing the lead in UAA's Aklaq and Nayak, the operatic Iñupiaq version of Hansel und Gretel.

The Unalakleet-born student also appeared prominently in an award-winning UAA advertising campaign, regal in an opera-appropriate gown, under the headline: "She didn't steal the spotlight. She earned it."

Now, Kira is hoping to get accepted into a great graduate opera program.

Her advice for students just starting their UAA careers?

"My professors and peers were all very helpful and encouraging," she said. "Professors were always kind, and want the best for students. I wish I would have known this earlier on and been less afraid of asking professors for help. They really are the experts and, with my experience, all love to pass on their knowledge and want us to succeed." 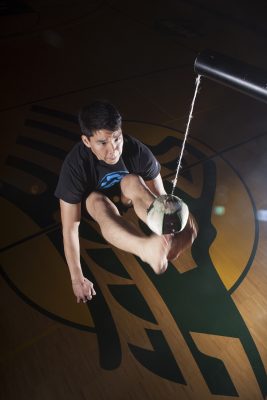 Kyle Worl performs a two-leg high kick. Kyle graduated with a bachelor's degree in anthropology, with a minor in Alaska Native Studies, at Sunday's commencement. (Photo by Philip Hall / University of Alaska Anchorage)

A desire to grow and shape a more dynamic community of Alaska Native students has propelled and motivated Kyle Demientieff-Worl throughout his UAA career. On Sunday, he achieved his goal of earning a bachelor's degree in anthropology, with a minor in Alaska Native Studies.

Maintaining connection with culture is Kyle's touchstone in life. For years, he has enthusiastically participated in World Eskimo Indian Olympics — at this year's competition, he took first place in kneel jump, knuckle hop, "drop the bomb" and the greased pole walk. And, he set a new world record — 63 inches — for swing kick.

His greatest achievement for UAA, however, has been his success in highlighting Alaska Native cultures on and off campus — teaching Tlingit at the UAA Cama-i Room's language nights and helping grow the "Giving Thanks" celebration on campus into a potluck that draws hundreds of people.

Kyle's work is already bearing fruit, energizing people like UAA freshman and Facebook singing and drumming phenom Byron Nicholai, of Toksook Bay, who described the event's impact on him: "I think it's important because it gives you a sense of home." 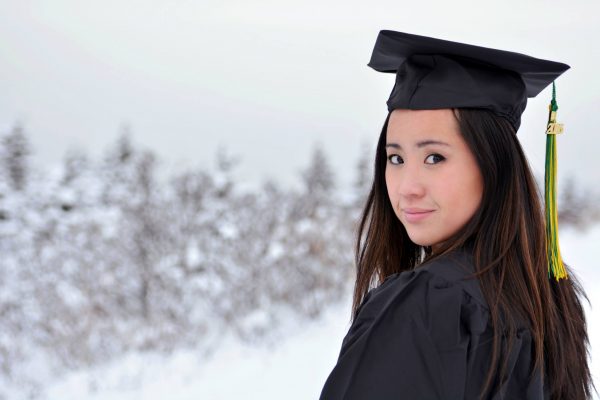 Maia Wen accepted her bachelor's degree in psychology (with a minor in communications) on Sunday, along with University Honors, Departmental Honors, and Leadership Honors.

For years, Maia has juggled classes, multiple jobs, community service, research projects, assistant teaching, and involvement in clubs. She was accepted into the National Institutes of Health-funded BUILD EXITO research program and is the program's first graduate.

She secured a job in the research field at UAA's Center for Behavioral Health Research and Services and plans to take a lengthy break before graduate school as she prepares to submit three publications to journals.

Maia credits her accomplishments to "the incredible network of people that UAA hosts."

"UAA faculty are incomparable," she said, "and I am humbled by their advocacy."

Her advice to new students?

"Believe in the power of people, and take advantage of it," she said. "I reflect on everything I've done in the past 3.5 years, and it all traces back to the unwavering support I've received from professors, staff and peers at UAA. I was able to do these internships and research projects and conferences because someone recognized something in me and referred me to that opportunity." She recommends students stop by their professors' office hours and start a conversation with them.

"They actually care about you as a student," she said. "Don't be afraid to ask them if you can be their teaching assistant or research assistant, and make sure you request that letter of recommendation!"

Making your presence known on campus is a crucial step toward future success.

"Involve yourself in clubs and sports and campus life," she said. "Your outreach efforts will pay off tenfold in the long run because networks are incredibly powerful things. And in small communities like UAA and Anchorage, every interaction makes a difference." 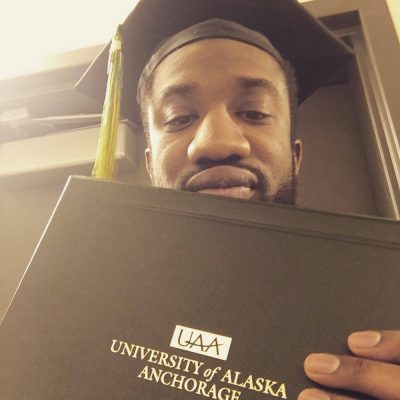 "Nothing too grand, at this point," he said. "At this point I applied to be a [teaching assistant] and I'm looking to either take the Praxis [teaching test] or apply for a GS job."

1. When considering graduating, apply and RSVP. Nothing else matters until that is done. Pay attention to your email's details.

2. Pay attention to Blackboard and deadlines.

3. Do your assignments a little bit at a time daily. 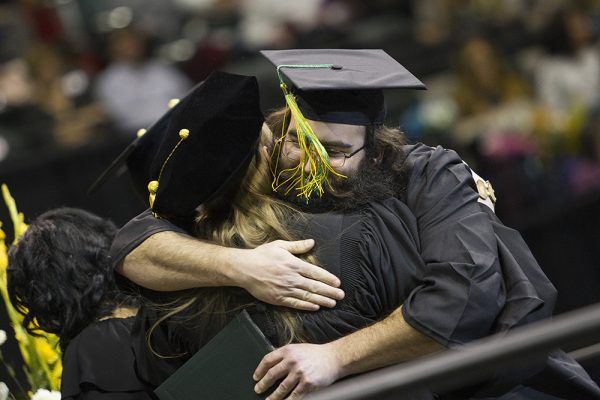 The past few years have been eventful for Bryan Box. After ending his stint as president of Student Veterans of UAA, the biological sciences major focused on finishing school and began an internship with the U.S. Department of Agriculture's Forest Service, Forest Health Protection.

He spent the summer of 2015 working in Cooper Landing at the Broadview research station. There, he collected woodboring beetles and bark beetles using traps within the Chugach Forest Health Treatment Area, a 621,000-acre section of Chugach National Forest set aside for forest health research, monitoring of beetle populations in response to climate change, and protection method development under section 602 of the 2014 farm bill.

"I also helped out with the last season of a five-year latitudinal transect study of hardwood defoliator — caterpillars, leaf rollers, leaf miners — populations, studying the population shifts in response to warming temperatures and reduced precipitation due to climate change," he said.

After launching and then discontinuing a run for the Alaska State House (he needed to move out of his district), Bryan went full-bore into research, continuing his summer sampling work in the FHTA, as well as performing aerial survey missions — "they fly me around in a Cessna 206 looking for beetle infestations — and monitoring the status of the spruce aphid outbreak in Homer. At the same time, he collected samples for his fall research with Dr. Jeff Welker, Fulbright Distinguished U.S. Arctic Chair and research professor at UAA.

"My research is basically, 'You are what you eat', but quantified," he said.

Bark beetles attack trees that are sick, wounded, or stressed by drought, he explained.

"Using a technique called stable isotope biogeochemistry, we can tell the difference between the bark tissue of a stressed/sick tree and a healthy tree," he said. "Similarly, we can also tell the difference between beetles from trees under varying conditions because of the research I performed this fall. It determined what is called the 'discrimination factor' of the spruce beetle, which allows us to determine the condition of the host tree in which the beetle was born."

• Never take student loans. Do your best to graduate debt free, or as close to it as possible. Do whatever you need to do — apply for scholarships, live like a monk, even face the enemies of the United States in close combat. It is worth it to emerge debt free.

• Never think you are above living in a shoebox apartment to save money. Skimp on luxury and always use the savings to buy healthy high-quality food.  Good, healthy, nutritious food is a thousand times more important than new clothes. 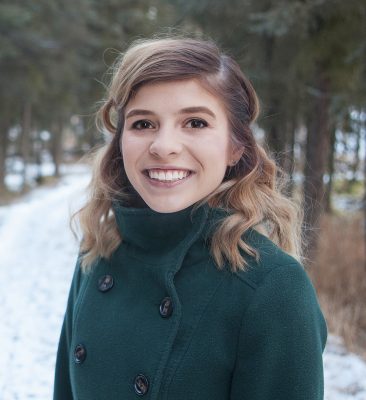 Sophie Leshan didn't intend to stay at UAA back when she first moved to Alaska from Michigan in 2013. Her energy and enthusiasm, however, motivated her to create an academic career that benefits not only her fellow UAA students, but also the children she student-teaches and kids who will receive an improved education as a result of her undergraduate research with Education Professors Kathryn Ohle and Hattie Harvey.