Warm up with a tea ceremony at UAA's new Japan Center 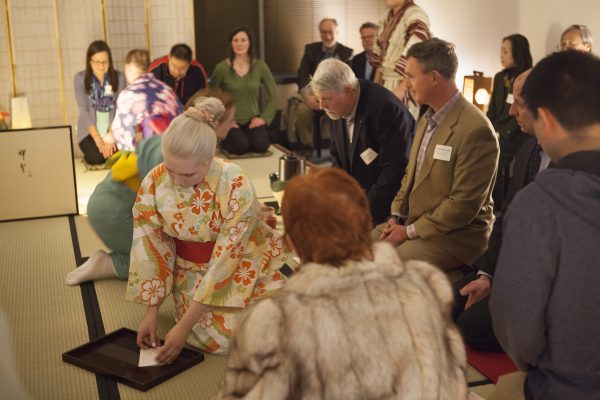 Japanese language students served chancellors, donors and even the Consul of Japan at the Tea Room ribbon-cutting on Nov. 18. (Photo by Phil Hall / University of Alaska Anchorage)

Tucked into the back corner of the Social Sciences Building, past the whiteboards and across from the math lab, you'll find the Japan Center's tea room, established in memory of 2009 languages graduate Montgomery "Monty" Dickson. Designed in traditional Japanese style, the space provides a home for the most popular concentration in the Department of Languages (there are 24 declared Japanese majors at UAA this semester).

At the ribbon-cutting ceremony on Monday, Nov. 28, more than 200 guests arrived to commemorate the tea room with a traditional Japanese tea ceremony. Kimono-clad language students served tea prepared by Yuki Moore, a tea master on the department's faculty. University leadership joined the local consul from Japan to cut the ribbon and officially dedicate a space on UAA's campus for Japanese culture and events.

Welcome to the Japan Center 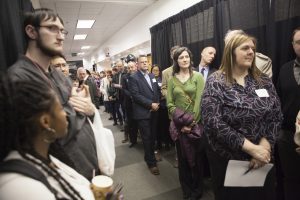 The tea ceremony is a centuries-old ritual in Japan, and a nearly decade-old tradition at UAA. For the past nine years, the Department of Languages has offered a tea ceremony course to explain the common yet complex tradition, and the deeply held cultural values it represents. The ceremony's methodic steps and gracious presentation reflect the simplicity, modesty, style and calm that define much of the Japanese aesthetic.

Despite its 9th century origins, the ceremony remains so central in Japan that citizens still spend years studying the tradition's artfulness and intricacies (that includes Yuki-known as Moore Sensei by her students-who attended Omotosenke, one of Japan's three most revered tea ceremony schools). Students at UAA, though, can learn the basics in an express course over just 15 weeks. 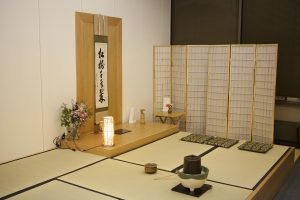 In prior years, students would spread tatami mats on the floor of a classroom for their semester-ending public tea ceremony, but the new Japan Center tea room-with significant support from Rasmuson Foundation-provides a much more authentic vibe. The redesign, from Japan's Kato Biken Company, applies numerous touches of a traditional teahouse to the narrow former classroom. Soft lighting from paper-and-wood lanterns illuminate the space. Guests kneel on red cloths over a raised platform of tatami mats. A central scroll hangs on the wall above decorative vases. A sliding door connects the main chashitu, or tea room, to the smaller mizuya, where the host prepares treats and equipment.

All told, the UAA tea room is a cozy, inviting space for a host of cultural events. "In Japan, usually the living room is a multipurpose room," explained Hiroko Harada, Japanese language professor and director of the Japan Center. She expects the same versatility in the tea room-designed for tea ceremonies, but readily available for meetings and classes, Zen meditations and flower arranging.

"I feel like I want to move in here," she added. 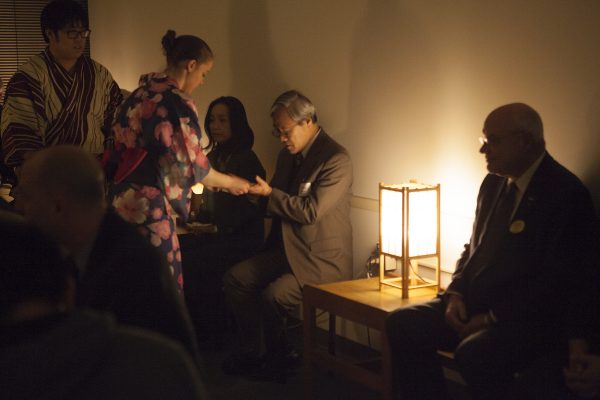 A kimono-clad Japanese language student serves tea to the Consul of Japan at the ribbon-cutting ceremony. (Photo by Phil Hall / University of Alaska Anchorage)

In memory of Monty

The space honors Monty Dickson, one of Hiroko's former students who perished in the tsunami that struck Japan on March 11, 2011. At that time, he was in his second year teaching English through JET, or the Japanese Exchange and Teaching Programme. Placed in rural Iwate Prefecture, Monty taught at 16 schools in the coastal town of Rikuzentakata, where nearly 2,000 residents-seven percent of the city-perished in the disaster. As Joshua Hunt wrote in Pacific Standard magazine, "Few communities were affected by the disaster as deeply as Rikuzentakata."

Following the 9.1 quake-among the most severe in recorded history-the Japan Foundation, which sponsors the education-focused JET program, approached the UA Foundation to establish a fund  in Monty's memory at UAA. Since 2012, the Japan Foundation has provided up to $100,000 a year to encourage cultural and educational opportunities at Monty's home university, like a summer course on disaster preparedness between UAA and Iwate University and a robotics conference (complete with robot seals) in Anchorage. NHK World, the international arm of Japan's public news agency NHK, even traveled to Anchorage last year to film an English-language segment on Monty's legacy at UAA. 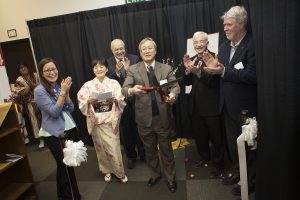 The Consul of Japan cuts the ribbon at the Tea Ceremony dedication. (Photo by Phil Hall / University of Alaska Anchorage)

The tea room is the latest tribute to this dedicated UAA language grad, "This is special," Hiroko said, reflecting on the connection between a classroom and a cause. Monty wasn't just a student in Hiroko's class; he was a close friend of her son as well. Hiroko encouraged Monty to apply for the JET program, and she saw him off at the Anchorage airport when he left to volunteer (on the same flight as her son and fellow UAA graduate Steven Wilson). As she says in the NHK World video, she feels some responsibility for putting him in danger.

"Now it is my commitment to fulfill his dream of connecting the country he loved and Alaska, his home state," she added. The Japan Center, she noted, will continue Monty's goal of bridging the Pacific and deepening the understanding and appreciation between his home in Alaska and his heart in Japan.

A plaque briefly sharing Monty's story hangs on the wall of the center; the text includes a powerful anecdote from the day of the disaster.

"On the morning of March 11, 2011, a friend asked Monty Dickson to translate into English a Japanese phrase from the essay Koan no Taimatsu (Ogata Koan's torch).

That day, a magnitude 9.1 quake unleashed a devastating tsunami that ended Monty's life. Left behind on a piece of paper later was that phrase Monty had translated: There is nothing as beautiful as dedicating oneself for a cause." 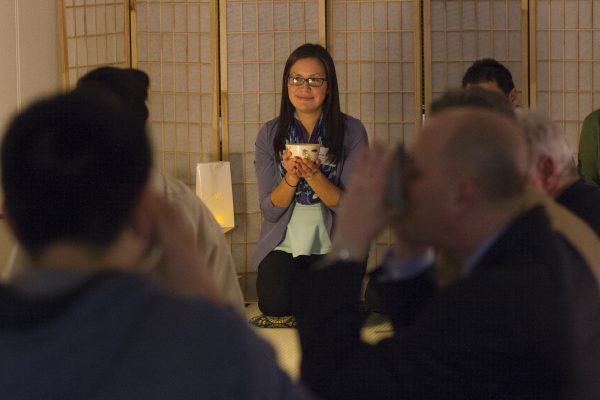 "Warm up with a tea ceremony at UAA's new Japan Center" is licensed under a Creative Commons Attribution-NonCommercial 4.0 International License.