"If you can do logistics in Alaska, you can do it anywhere in the world.” 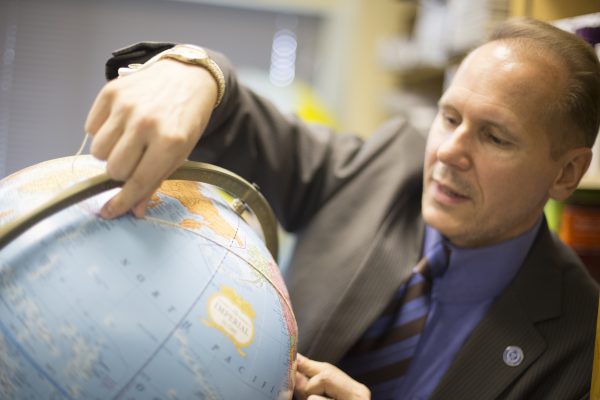 "We know the earth is round, but we act as if it's flat," said logistics professor Darren Prokop. (Photo by Ted Kincaid / University of Alaska Anchorage)

For logistics professionals, the North isn't an outpost. It's the center of the world. 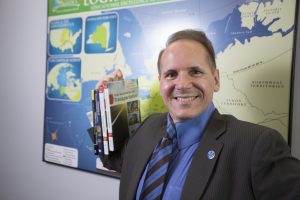 Alaska-centrality defines Prokop's teaching style, as well as his external work. He recently authored three logistics textbooks that colleagues are using in classrooms from Long Beach to Chicago to South Korea, and he has two more books in the works. His texts span the logistics field, covering topics like transportation economics and supply chain security, but all are written with attention to Alaska.

"We know the earth is round, but we act as if it's flat," he said, explaining that Anchorage is 9.5 hours flying time to 90 percent of the industrialized world. "We're in the center."

Taking a piece of string and rotating a globe - one of several in his office - he demonstrated how London is closer to Anchorage than Los Angeles. Pivoting the other direction, he showed how California container ships bound for Asian markets skirt the Aleutian chain on the shortest path between ports.

Alaska is the linchpin linking North America and Asia by air. Ted Stevens International Airport is the world's fourth-busiest cargo airport, with 70 cargo planes landing each day just to refuel. And as Arctic Sea ice melts, Alaska coastal ports will become a vital connection on the path between Europe and Asia, too.

"Alaska is dependent on logistics and supply chain management for its economic development and survival," Prokop said. "On the other hand, we have the biggest, most expansive logistics laboratory in the country." In his eyes, Alaska's small population, massive area, extreme weather, and limited infrastructure are just elements in a puzzle to be solved.

"I often tell my students, if you can do logistics in Alaska you can do it anywhere in the world," he said.

That belief led him to publishing. Looking at the existing textbooks in logistics and supply chain management, Prokop rarely found examples that framed the global supply chain around Alaska features, like combi planes and shipping laws to noncontiguous states. 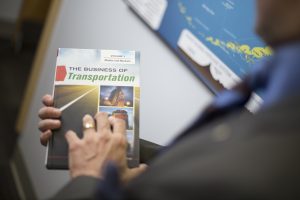 Prokop published his first textbook, "The Business of Transportation," in 2014. (Photo by Ted Kincaid / University of Alaska Anchorage)

"I thought, maybe there's a market for a fresher look at logistics and global supply chain management that explicitly brings in Alaska examples," he said. He pitched the idea to publishers; his first book, The Business of Transportation, printed in 2014.

Writing and editing textbooks while simultaneously teaching university courses sounds demanding, but Prokop - who's taught at UAA since 2000 - doesn't show any weariness. Like the global markets he studies, Prokop is innately dynamic, especially when talking about Alaska.

His office is decked in maps of varying regions (Alaska, the Arctic Circle) infrastructure and transit routes (the pipeline's path, routes through the Northwest Passage) and not one, but two, massive beach ball globes.

One map of retreating Arctic Sea ice points to the future, and Alaska's increasingly central role in the global supply chain. As the planet warms and ice retreats, Asia and Europe could shorten their transit time via new shipping roofs in the Arctic Ocean. China, in anticipation, is assembling a fleet of icebreakers to aid in opening the route. Once again, Alaska is front and center in the supply chain.

Though supply chains change every day, Prokop is convinced Alaska will stay central to the logistics and supply chains conversation from its perceived perch in the North.

"The art and science in supply chain management and logistics is trying to do the best you can, given the current reality, and trying to anticipate the future," Prokop said. "All those things are mentioned in these books."

"When we think about strategic planning in the military and trade, we have to think about the North," he continued. "That means Alaska is suddenly in the center of things, and that's in these books as well."

""If you can do logistics in Alaska, you can do it anywhere in the world.”" is licensed under a Creative Commons Attribution-NonCommercial 4.0 International License.