Each semester at UAA, students from various colleges and majors collaborate with professors to help them achieve success with community engagement projects. Community Engaged Student Assistants, also known as CESA students, play a vital role in conducting research and connecting UAA to the greater Alaska community.

The CESA program, hosted each fall and spring through UAA's Center for Community Engagement and Learning (CCEL), offers professors with much-needed help on specific community projects and provides students with a hands-on learning experience to apply what they've learned in the classroom to real life.

Students in the program attend CESA meetings over the course of the semester, presenting their projects, research and findings. As a group they learn about what UAA departments and professors are working on and how their work can impact the community in Anchorage and Alaska to make positive change. 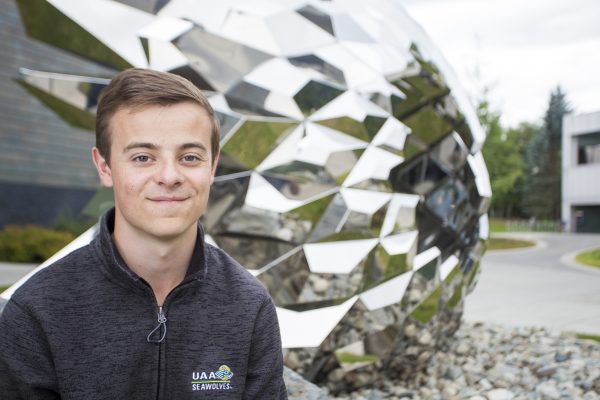 "Education has always been a really important part of my life," said Alex Jorgensen, a junior political science major. "It's a way that I can become a person in my community who is making a positive social change." This semester, Alex has teamed up with political science professor Kimberly Pace on running the university's Model UN (MUN) program, which culminates with a conference including Anchorage School District high school students, as well as UAA students.

Ever since Alex was young, politics has always interested him.

"I've always been known as that guy who likes politics way more than anyone else," he said. He's participated in MUN since his sophomore year of high school and when he applied to UAA his freshman year and saw they had a class he could sign up for, he thought, "Why not?"

It's Alex's sixth year participating in the MUN program — three years in high school and three years at UAA. He said the Model UN class has been just as much fun at UAA as it was in high school and that his experience through the high school program is a big reason why he chose political science as his major. Throughout the years, he's worked his way up through the Model UN ranks, from delegate his freshman year, to director, to being promoted to the general assembly this year.

Additionally, this year he's taken on the title of CESA student-jumping at the chance when his professor asked for help with her MUN community engagement project. He's one of three administrative assistants coordinating this year's February 2018 conference, as well as helping to continue the Romig Middle School MUN, a pilot program partnership that launched in March 2016. Alex said 2016's program was a huge success with more than 300 middle schoolers participating, along with members from UAA's Secretariat and representatives from West High School. He's working with his professor to help expand the program this year.

"It's an amazing way to study geography and to see seventh graders discussing international policy on a higher level than a lot of high schoolers-and maybe even some college students," Alex said. "Being a part of CESA, I'm able to look at this program as not just participating in a program that I think is really cool, but looking at it as a program that's engaging a wide range of demographics, and hopefully, one day, engage them so they'll want to come to UAA." 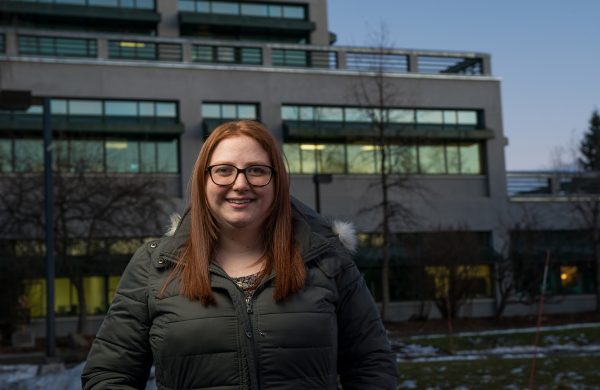 Kaitlan Head, a third-year health sciences major with a focus in speech and language pathology, teamed up this fall with Travis Hedwig, an assistant professor of health sciences in the Department of Health Sciences, whose project involves interviewing adults diagnosed with Fetal Alcohol Spectrum Disorder (FASD) who have and don't have case management representation.

Kaitlan said she's had an interest in FASD, but that her focus had been more on children in pre-K-12, and that after taking Global Health with Travis last spring, his class broadened her scope of study on this topic.

"As a speech and language pathologist major, I was more focused on the intervention and therapy side," said Kaitlan. "Travis opened my eyes to see that once children are out of the school system-then what?"

She said that through her work and research as a CESA student, she's found that many people aren't diagnosed with FASD early on, unlike other disorders, like autism, which is often diagnosed before kindergarten or early elementary school. Even then — when people are diagnosed — access to resources can be difficult.

"There are a lot of people who are being diagnosed later in life and then trying to grapple with how to use the services that are available to them," Kaitlan said. "It kind of breaks your heart when you realize that someone with this diagnosis could have had services their whole life and they struggled."

Kaitlan said this is why Travis's project is so important, evaluating FASD case management services and how people with case managers have a higher chance of success versus those without.

"We're trying to see the difference between when people have case management-that case management is crucial for an individual who has FASD," said Kaitlan. "That's been the most important part-making the case for it."

Kaitlan has enjoyed working on her CESA project so much that she's continuing her work with Travis into the spring semester. Before her professor asked her to join the project, she had never heard of CESA, but she's glad she took the opportunity and encourages other students to get involved.

"It's just been interesting to see how much you can engage with the community through so many different majors," she said. "I think anyone who has a professor working on a project should try and get involved." 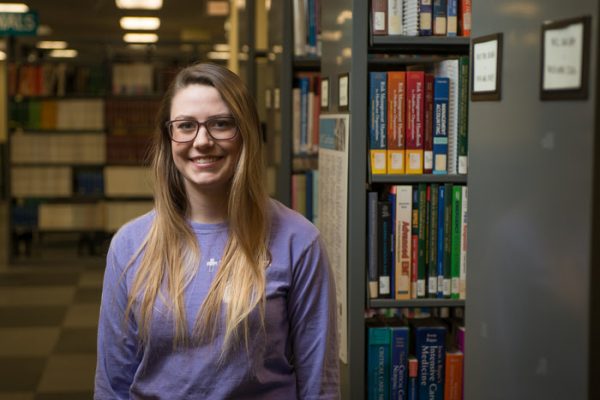 "I had Dr. Robinson's clinical psychology class this summer and was immediately drawn to her passion for other people," said Emily Duke, a senior psychology student working on a CESA project led by UAA psychology assistant professor Rebecca Robinson. "I asked her if she did research and how I could get involved."

Her professor did, and was conducting research with a Ph.D. student on a project titled "Pathways to Recovery from Co-morbid Homelessness and Substance Abuse," where they were interviewing people who identified themselves as recovered from homelessness, substance abuse issues or mental illness.

Rebecca brought Emily onto the project as a research assistant to transcribe interviews and introduced her to the CESA program. The program has been an eye-opening experience and has proved to be invaluable not only for her but other students wanting to take on research or community engagement projects at UAA.

"I went to the meetings with all the other CESA students and got to see how diverse their projects were — I really didn't know too much about it," said Emily. "I thought it was just a research thing, but really it's community projects."

Despite the extra work on top of an already busy student schedule, Emily has enjoyed her CESA project and plans to keep on transcribing interviews for the project next semester.

"It's been really inspiring to hear from all of these men and women who consider themselves recovered and their journey through that," Emily said. "It's really given me a heart for people who are homeless or have substance abuse or mental illness. I've learned a lot."

She said the project is the first of its kind and takes a novel approach in looking at recovery from the patient side and how they define recovery in their own terms versus how an institution may evaluate them.

"What we're finding is that people really don't define their recovery like that [from an institutional view] — and that some people are still homeless, even though they have a place to stay in a community," she said. "They define themselves recovered because they're finding themselves transformed within."

Emily said her CESA experience has been great and students looking to get involved in a project related to their field of study should connect with their professors or CCEL.

"I think a lot of people want to help out and do more, but they just don't know how," she said. "I never would have known about the CESA program, if I hadn't reached out to Dr. Robinson."

"Getting involved" is licensed under a Creative Commons Attribution-NonCommercial 4.0 International License.