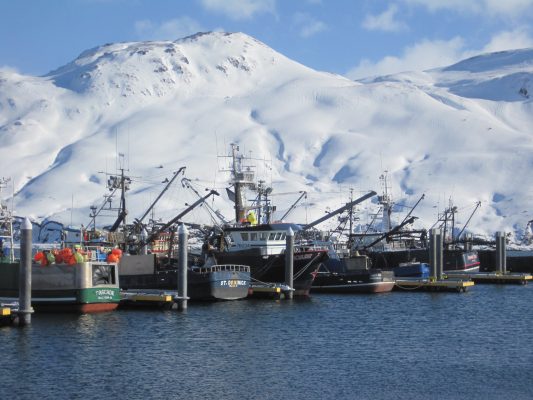 With the most commercial and fishing traffic on the Bering Sea, Dutch Harbor can expect a significant increase in invasive species as the region's water warms over the next several decades (Image by M. Reimer).

Invasive species have devastated marine ecosystems in the Lower 48 but, thanks to its icy waters, the Bering Sea has been largely unaffected. So far.

"Right now, the Bering Sea is relatively pristine in terms of non-natives and invasives," explained Jes Reimer, a zoologist with the Alaska Center for Conservation Science (ACCS), a research arm of the University of Alaska Anchorage. "But what we keep hearing, what we keep seeing, is that waters are changing."

Increases in both temperature and traffic threaten the Bering Sea. As the water warms, more invasive species will find a comfortable home there. And as the ice recedes, more ships will deliver cargo through the area. Those ships will likely deliver tanks of invasive critters, too.

The temperature and salinity in the Bering Sea, North Pacific and Gulf of Alaska will become increasingly habitable for invasive species by the 2030s (Graphic courtesy of ACCS).

Reimer and her colleagues at ACCS recently completed a three-year project identifying invasive threats in the Bering Sea. Their results are publicly available at beringinvaders.org, and a first step to solving a complex problem.

Preventing invasive species is exceedingly tricky underwater. Currents can carry non-natives across wide stretches of the ocean, where even massive creatures are difficult to locate.

"A lot of these species that we're looking at are microscopic," said Amanda Droghini, a research technician at ACCS. "They're very hard to see until they [number] in the millions, and at that point you have a real problem on your hands."

That problem is economical, as well as ecological. Invasive species compete for resources with established fisheries, and can damage commercial infrastructure in ports. ACCS hopes to prevent these problems in Alaska.

Through funding from the Aleutian and Bering Sea Islands LCC and the North Pacific Research Board, ACCS ranked the biggest threats to the Bering Sea, based on each species' traits, habitat needs, and possible economic effects in the region.

From this starting point, ACCS identified 46 invasive threats poised to jump to the Bering Sea. Next, they looked at the salinity and temperature conditions each species needed to thrive. (The study does not consider factors like predators and competitors, which would also limit population growth.)

Using global circulation models, ACCS estimated the Bering Sea's average temperature from 2003-2012, then projected conditions for 2030-2039. The result? Things are fine... for now.

"Most species we looked at can survive in their adult forms in the Bering Sea under current conditions," said Droghini, but not long enough to reproduce, meaning an invasive colony can't gain a foothold.

"We saw very little area where the conditions and duration of those conditions lasted long enough," added Reimer. "Whereas when you look at 2029 to 2039, it completely opens." ACCS predicts 40 to 60 percent of the Bering Sea shelf will become hospitable to non-native species in the next 20 years.

The Bering Sea's temperature and salinity conditions at 200 meters or less-where green crabs typically live-will become even more habitable for the invasive species by the 2030s (Graphic courtesy of ACCS).

Take, for example, the green crab, ranked No. 2 on the ACCS threat list. These European invaders have already dismantled ecosystems in Maine and made recent gloomy headlines in Washington and British Columbia. But they need six to nine weeks to reproduce, and Bering Sea conditions aren't hospitable for that length of time. Projections for the 2030s say otherwise.

"Right now we have this really invasive species that might be able to survive, but it can't do much. Twenty years from now, it will be able to reproduce and proliferate and spread," Reimer said of the green crab. "I think, for me, that was one of the starkest species, especially because it is one that people are so worried about."

Green crabs likely hitched a ride from Europe to Maine, and onward to Washington. Today's shipping practices all but guarantee that will happen in Alaska, too.

When a ship delivers its cargo, it compensates for the missing weight by filling a ballast tank with water. At the next stop, the ship empties that ballast water, along with whatever millions of critters were sucked inside at the previous port. 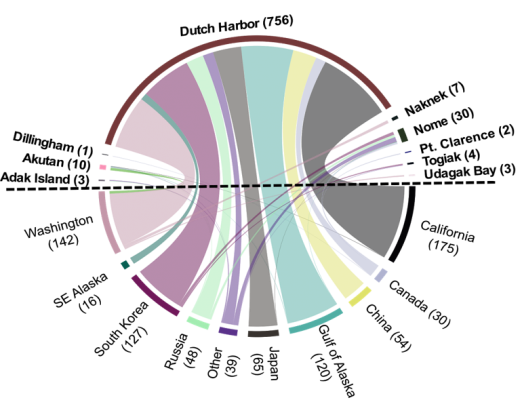 Using public data from Smithsonian Institution's environmental research center, the ACCS team could see where every ship in the Aleutians started and ended its route, and how much ballast water each dumped in the Bering Sea. From 2014 to 2016, more than 92 percent of total traffic unloaded in Dutch Harbor.

Ecologists are obviously concerned, but economists will decide next steps. By providing the baseline and timeline, ACCS hopes policymakers will address the issue and the cost of control.

But funding for prevention is a challenge in today's interconnected world. Alaska can expect a transnational tangle as ice recedes and traffic increases.

"I think the shipping industry and government as a whole are struggling with this question, how do we prevent these species from coming in? And on whose shoulders does the responsibility fall?" Droghini said of the Bering Sea. "We're talking about thousands of vessels taking tens of thousands of trips every year from so many ports. How do you actually control and prevent that issue?"

Both the U.S. Coast Guard and International Maritime Organization regulate ballast management. Ships can install equipment that sterilizes ballast water, and ports can turn ships away, too. But all it takes is a handful of specimens to start a population.

"We've been so protected by our cold waters, but as those conditions become more favorable, it opens up for countless number of species to get here," Droghini said.

"For us as Alaskans, it's important to recognize who's traveling these waters and what impact they might have on the communities, on the fisheries [and] on our ability to enjoy our natural resources." 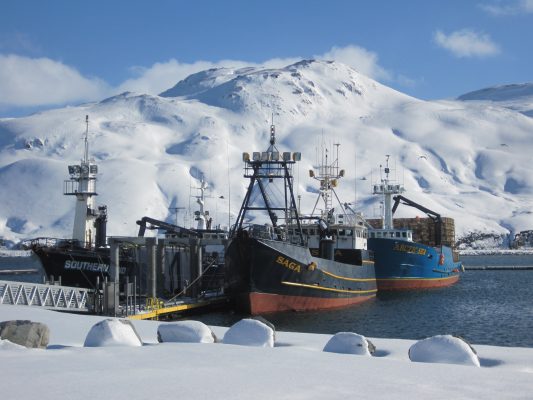 "Preparing for an invasion in the Bering Sea" is licensed under a Creative Commons Attribution-NonCommercial 4.0 International License.