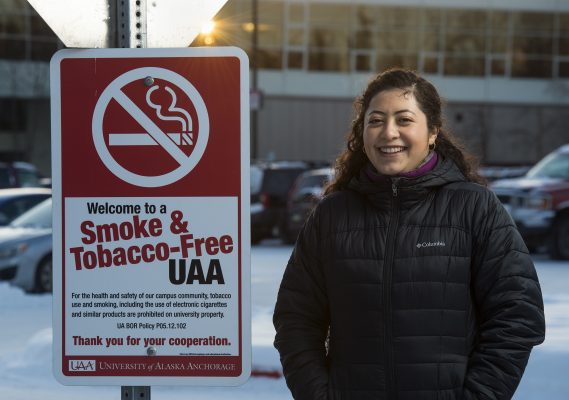 In 2012, the University of Alaska Anchorage student Asian Pacific Islander Community Wellness Club (APICWC), Master of Public Health (MPH) students and students from the School of Nursing gathered to make a historic change on the university's campus.

They wanted UAA to go smoke- and tobacco-free.

It was a big moment for the university, and for Valeria Delgado, who was a freshman when she began working on the smoke- and tobacco-free initiative. Valeria, now a senior majoring in biology, said her experience advocating for a smoke- and tobacco-free campus inspired her undergraduate studies, as well as her decision to pursue a master's in public health.

"Getting involved with the smoke-free team was something I really got behind," Valeria said. "It introduced me to new ideas-on how to make campus more healthy."

Getting involved with Smoke- and Tobacco-Free UAA

During Valeria's freshman year, she decided to join a friend at an APICWC club meeting where she met Gabe Garcia, an associate professor of public health in UAA's Department of Health Sciences. She said that Dr. Garcia and the club were focused on the current smoke and tobacco policy at UAA, which, at the time, allowed students, faculty, staff and visitors to smoke within 50 feet of a building. She said the APICWC and Dr. Garcia were beginning to create an initiative to change that, which she thought was good, but it didn't hit home for her until a rainy day in early fall.

"I came to the Consortium Library to study and my younger sister was with me-she has asthma," said Valeria. She and her sister walked into the building and a guy standing in front of the library entrance was smoking. As she and her sister walked past, he blew a cloud of cigarette smoke right into her sister's face. "My sister inhaled it and she had a terrible asthma attack. That really scared me. That made me realize that this campaign is actually necessary."

She started thinking about other students at UAA and how she didn't want them to come to school and have the same experience, or have to take extreme measures to avoid smokers on campus.

After the experience with her sister outside the library, Valeria dove in head first into researching smoke and tobacco issues in Alaska and across the nation. She was not impressed with what she found. She learned that "big tobacco's" billion-dollar industry, targets teens and young adults, hoping to hook them on their products early on. This cemented Valeria's resolve into working with Dr. Garcia and Dr. Joy Mapaye and the Smoke- and Tobacco-Free UAA group.

The club, along with many other student clubs, spent the next couple months gathering signatures to present their request for a smoke- and tobacco-free campus to the University of Alaska System's Board of Regents. The regents agreed that a smoke- and tobacco-free campus was a good idea, but just a few hundred signatures weren't enough to sway them into enacting a policy.

"We decided that in order to show the Board of Regents that the students wanted this, that we had to have the students vote on this," Valeria said. It was a huge campus-wide campaign, with long hours, hard work and, inevitably, some push back. Valeria said there was a small but vocal group of students who were against the campaign. It wore her down, but she focused on the end goal, and in the end, she said she learned a lot about herself during those months leading up to the April election.

UAA has been smoke- and tobacco-free for two years now. Valeria says it's nice to be able to walk around campus and not have to worry about inhaling cigarette smoke, and that she has gotten a lot of positive feedback from students who attended UAA before the policy was enacted.

"I always smile when I hear that because I remember how hard it was for some students," Valeria said. "And now, those students who were really negative say, 'You know what, I didn't know it was going to be like this-I'm actually glad about it.'"

After the university enacted the smoke- and tobacco-free policy, Valeria and the group had more work to do. They spent the 2015 academic year educating their peers about the dangers of smoking and tobacco use, and also offered cessation classes for students who were ready to quit. Which is what lead Valeria to cast her net further out than her home state.

Valeria was inspired and motivated by what the Smoke- and Tobacco-Free UAA group had accomplished on campus, so much so that she decided to apply for Truth Initiative's fellowship program last June. The nonprofit group is the largest public health organization in the U.S. dedicated to eradicating tobacco use.

Twenty-eight students are chosen nationwide to provide peer-to-peer education on the dangers of smoke and tobacco use, as well as helping Truth Initiative implement national campaigns in localized settings.

In September she went to New Orleans for a week of education on how to communicate with teens and young adults on tobacco use. This year's topic focused on social justice and tobacco. She said that tobacco companies often target minorities, lower income youth and vulnerable populations in their marketing campaigns.

"Social justice impacts are really important for young adults to know," Valeria said. "They have to know about the marketing tactics that "big tobacco" uses to get people to use their products."

This year, Truth Initiative divided their fellows into five teams to tackle five different cities that have reported highest tobacco use in the nation. Valeria's team was assigned Atlanta, Georgia. She and her five team members from across the country have been working together since August to create and implement a campaign in their assigned city. In February the group will hold an event in Atlanta to educate youth of the harmful effects of tobacco products and the marketing tactics used to get them hooked. It's a huge job and Valeria's group is full steam ahead as they prepare for their big February deadline.

Valeria has a lot on her plate this year, balancing school while working as a Truth Initiative fellow, while also preparing to dive straight into grad school once she graduates this spring. But she feels strongly about the work she's doing, helping educate her peers in Alaska and nationwide about the harmful effects of tobacco products and the often underhanded marketing schemes "big tobacco" uses to entice teens and young adults. She says at times it can be an uphill battle, but with patience, persistence and providing her peers the knowledge to make good decisions when it comes to tobacco, she's confident that she, Smoke- and Tobacco-Free UAA and Truth Initiative can help eradicate tobacco use.

"I feel frustrated at times, but we've come a long way," said Valeria. "But education is first."

Written by Catalina Myers,  UAA Office of University of Advancement

"UAA’s smoke- and tobacco-free initiative inspired Valeria Delgado to take the cause nationwide" is licensed under a Creative Commons Attribution-NonCommercial 4.0 International License.