Hydroponics in the Student Union 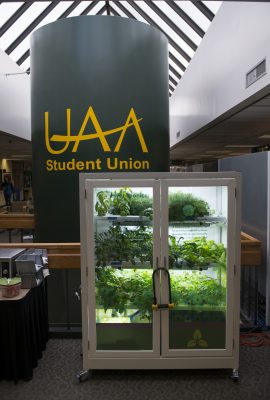 Passing by this cabinet-sized glass unit in the UAA Student Union - filled with lusciously green growing things - you might mistake it for a vending machine. It hums, it has lights. But instead of dispensing little packages of chips or gum or chilled soda, it is home to leafy things. No slot waits for your WOLFcard or for quarters from your pockets; its clear glass doors remain locked.

So what is it? You're looking at UAA's first hydroponic garden.

Hydroponic comes from Latin and means "working water." So hydroponic growing uses nutrient solutions to feed the plants in water, without soil. The nutrients supply nitrogen, potassium and phosphorus, plus trace minerals. The UAA unit cost $3,900, plus shipping (for a total of about $5,000); it runs on about $1 a day in electricity. At capacity, it can bring 66 plants to harvest in just 40 days.

The hydroponic garden began its happy humming life on campus last February. It has faced down a challenge or two, and already supplied greens for two campus events, with more planned. Here's the background.

Alaska is its own challenge

The Green Fee Board authorized the hydroponic garden purchase, utilizing funds from the UAA Green Fee, the $3 every student pays each semester. According to Kojin Tranberg, commuter student programs coordinator, the idea of growing fresh produce for use on campus has been a popular and persistent topic for a couple of years. While traditional gardens have sprung up periodically around campus, one of the biggest issues is Alaska itself. Summer is the intense growing season; yet most students are on campus fall through spring, when it is much too cold to grow things out of doors.

Some campus sustainability enthusiasts imagined purchasing an industrial-sized trailer outfitted with hydroponics and capable of growing greens for the whole campus, the kind of facility you would see in a converted Conex trailer, for example. That proved much too expensive, but the idea didn't die.

Meanwhile, the hydroponics industry evolved. Consumers - from homeowners to restaurateurs - began to clamor for a right-sized unit that might fit their wallets and their more constrained needs.

In Alaska, the answer came from VH Hydroponics, an Anchorage startup with a UAA M.B.A. alumna, Linda Janes, as one of its three co-founders. VH Hydroponics works with a prefabrication manufacturer in Spokane, called CXT. Besides offering the industrial-sized units, VH Hydroponics has been helping design smaller units that might work for those with fewer needs and resources. The result is the cabinet-sized unit that now belongs to UAA. A similar unit purred away at Airport Heights Elementary and another will soon be underway at King Career Center. The UAA culinary arts program also expressed some interest. The Anchorage Museum has also featured one of these cabinet-sized gardens as a way to spur sustainability conversations.

The application to purchase this unit came from the student workers in the Daily Den, with help from Tranberg. Although the unit will never be able to supply daily greens for the whole campus or even the Daily Den, the plan is for a regular (once-a-month) supply of fresh greens to feed a typical Daily Den crowd of 40-70. With all four of the unit's shelves fully loaded, a total of 66 plants should be able to meet that need.

The campus hydroponic caretakers have already managed one event, dubbing it "Salad Day," when they harvested enough fresh greens to serve crunchy salad to about 30 students. The Green Fee Board used that event to also host a movie on climate change and feature a panel discussion with campus experts.

Keeping sustainability in the foreground

This kind of activity fits the Green Fee purpose, to "promote sustainability efforts on the UAA campus through student-led initiatives that are defined as environmentally wise, economically sound and socially responsible."

Tranberg suggests that the Green Fee Board "looks for projects that will engage the campus community in a sustainability conversation." Besides the "Salad Day," the Green Fee Board also hosted a "Kale Tasting." The hydroponic unit was loaded to bursting with growing kale plants. Board members invited passersby to stop and take a taste of some fresh kale and learn more about hydroponics.

Beyond the planned events, though, the unit has been a traffic-stopper since it arrived. Initially, the glass doors didn't have the current information they now feature - details on what the unit is, how it was funded, and what it is for.

According to Tranberg, a huddle of students was always in front of the garden, pondering it. Tranberg said many of the questions were compelling, supporting the idea of engaging students in discussions about sustainability. Some asked how safe it is to eat hydroponically raised foods. Others wondered if the whole thing was a science experiment? (Not really.) Still others wondered if you could grow marijuana in it? (Yes you could, but no, you can't. Marijuana is not legal on campus even if it is legal in Alaska.)

To be fair, some of the spring semester was a learning curve on the new hydroponic unit. Tranberg says it is actually very simple to maintain. The issue was with the first nutrient product they used to feed the plants. It was totally organic; unfortunately, the plants turned yellow and failed to thrive. Tranberg said the nutrient density in the water was sufficient, but caretakers had trouble managing the pH balance, or the level of acidity versus alkalinity. Once they shifted to a different nutrient product (still produced without any petrochemicals and naturally sourced, according to VH Hydroponics' Linda Janes), the plants came around just fine.

Janes pointed out that hydroponic agriculture lets growers choose non GMO (genetically modified) seeds or organic seeds. The plants aren't exposed to any pests, so no pesticides are necessary. You literally don't even have to wash the produce before consuming it, she said.

About that UAA M.B.A. 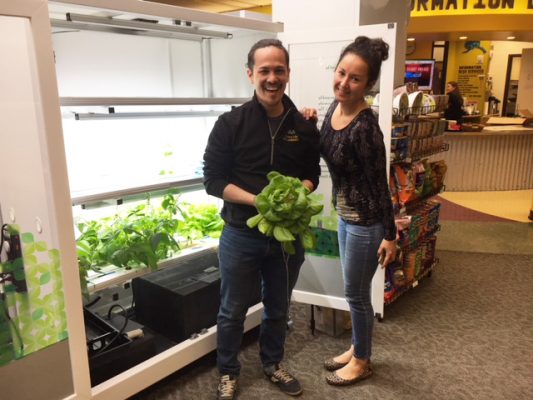 VH Hydroponics is just four years old. The three co-founders - Chief of Operations Linda Janes, Cam Willingham (she calls him the "plant whisperer - he's got 10-12 years of horticulture experience) and Daniel Perpich, (another business mind) share a small Anchorage office. As Janes put it, "We have three chairs and one of these (hydroponic units) in our office." There's literally no room for anything else.

Janes, who started her undergraduate work at UAA, transferred after three years to UAF to also earn her commission in the Army ROTC. She served 11 years as an intelligence officer in the military. She earned her M.B.A. at UAA, including winning second place in the 2012 annual business plan competition.

She was struggling to find meaningful work that was as challenging and satisfying as the complex assignments she had in the military. She bumped into Cam Willingham at an Anchorage TEDx event where he was presenting on 3D printers and Maker Space. He told her about his small business in hydroponics, "and before you know it, we were making PowerPoint slides," she said.

The rest is startup history. 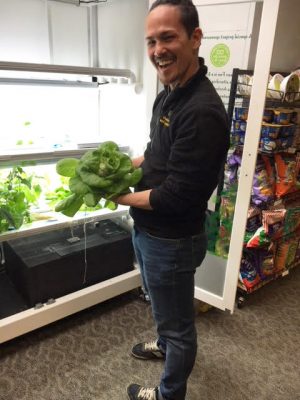 The day we three visited in front of UAA's hydroponic garden, only one shelf was loaded with plants. It featured a couple of big heads of butter leaf lettuce, a clump of happy chives, some catnip and some green beans. Tranberg promised that catnip would never be served in the Daily Den (grin).

Just before we finished the interview, Tranberg reached in to harvest a big head of lettuce. He opened the small container beneath the green head and pulled lettuce roots from the nutrient liquid. They were long and white, really pristine.

Written by Kathleen McCoy for UAA Office of University Advancement

"Hydroponics in the Student Union" is licensed under a Creative Commons Attribution-NonCommercial 4.0 International License.