Scientist and writer Marilyn Sigman's days in Anchorage are numbered. At 66, she's gently winding down her science education and communication career and moving permanently to a place she loves and has lived before, Homer on Kachemak Bay. 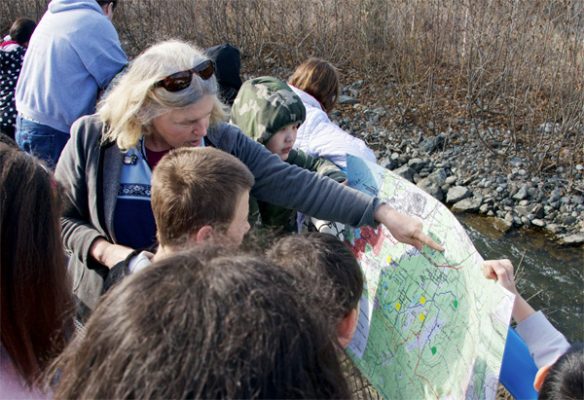 This is less an ending than a transition. Her new book, published by the University of Alaska Press in February, called Entangled: People and Ecological Change in Kachemak Bay, bridges that career with her new passion - putting into emotional and spiritual terms what it means to witness climate change.

We met at a noisy Anchorage café. I had skimmed parts of the book, and read and listened to several author interviews and public presentations. I quickly realized Entangled is thoughtfully dense and reflective. When I said this, Sigman concurred: "My brother and good friends who've picked it up say, 'You can't read this book quickly!'" To which she laughed; it's true, and perhaps one of the reasons it is so worth the time.

Instead of dissecting the book's message, I was compelled to find out how graduating in nonfiction from UAA's Creative Writing and Literary Arts program influenced or even facilitated the book's creation. I was curious: What is it like to go back to school in your 60s? Is Sigman forging a path that other Alaska professionals might follow? If you've done good work for decades in a place as fascinating as Alaska, are there future essays or books you could write as a way to share your perspective?

We spent about an hour together as she offered her take.

Working your way up to it

UAA's M.F.A. is not the only local resource Sigman used as she journeyed from science writer to creative writer. The evolution took a few years, and was essentially topped off by her work in the writing program.

Much of her professional science writing followed a certain path "where you are generally the narrator," she said, "or, if you are doing popular science, you are a kind of cheerleader for the science. It's not about you, it's all about the science."

She realized she had the capacity to synthesize science for a broad audience, and some of that resulted in essays that received honorable mention in the UAA/ADN Creative Writing Contest in 2005-2006. She expanded to essays published in Alaska Quarterly Review and the Alaska Dispatch News. She attended the Kachemak Bay Writers' Conference and offered up an early essay for review by Alaska writer Sherry Simpson, who gave it a thumb's up, with edits, for publication. She took a class on creative nonfiction from literary science writer Nancy Lord.

Still, most of that work had been more about the science than Sigman's thoughts about the science. Her M.F.A. thesis had to tackle a craft problem. Hers was this: How do you bring yourself into science writing? She found kinship in natural history writers like Charles Darwin, David Quammen, Ellen Meloy and Aldo Leopold, among others. "They were present" in the writing, she said. "There are diversions and metaphors. You can see them thinking on the page.

Going back to school at 60

The best part of going back to school? Deadlines. They force the work. "Right now," she said, laughing, "I'm suffering without deadlines." She has many more ideas for essays and even a potential future book, about Alaska's community libraries and their rich collections of local content. "It'll be a fun one!" Still, a deadline might help.

Another strong point of the program: Intense attention to your writing. "You have a cohort of creative nonfiction writers, five or six people, reading your manuscript, and you offer that to them as well." She said Sherry Simpson told her, "No one will ever pay as much attention to your writing again as right now." She considered their feedback immensely influential: "It's really helpful to have people say, 'I don't have a clue what you are talking about,' or 'Here is where the science really bogged down,' or 'I just didn't care anymore....'"

Something a bit more meh about the program: Literary jargon. From her time around scientists, Sigman knows how every field has its own jargon. So why should literary criticism be any different? It took her a while to learn to use the right language in describing her fellow students' work. On the other hand, something they all had in common was a passion for reading, which she found worth bonding over.

The true gold? Mentors. Sigman said the program offered significant guidance that shaped her final book. She'd already studied outside the program with Nancy Lord. She named Craig Childs, who writes about archaeology, a good fit because of his experience writing about science. She spent profitable time with Sherry Simpson, who writes personally about Alaska science and nature. And toward the end, she spent important time with Eva Saulitas, a writer and marine biologist who died of cancer in 2016.

"I would give Eva all my stuff to read," Sigman said. "She was also a scientist so she knows where science thinking comes in. She would go, 'Right here ... this is what you are trying to talk about. How do you expand out from there about yourself? The science will just follow behind that.' She was excellent. She would just go to the heart of it: this is the essence, the emotional essence, the spiritual essence, of what you are trying to say."

The problem to overcome

As a part of the program, Sigman needed to produce - and workshop and polish - 100 pages of her project - which was the beginning of her book. Teachers in the program told her: "We will get you as far as we can, but we are not going to guarantee you that you will have a book at the end." Sigman says the core of the book did come out of the program, to which she added major chunks, making it into the book it became.

"When I started out, one of my jokes was that I felt like there was a scientist looking over my shoulder, a male scientist. The scientist would say, 'You can't say that...' or 'That is not completely accurate...'"

She felt constrained, even noting that in early drafts she added attributions. "It just looked and read like a literature review."

A key development for her as a writer, and for many writers of scientific nonfiction, is to avoid "writing up your notes."  That's not the story. "A lot of what I learned is how do you take this mass of information and find the story, find out 'what does this science mean to me'"?

Saulitas gave her good advice. She told Sigman to do all her scientific research, but then put it away. Then write. Your research will underlie your writing and emerge, she said.

She took a tip from Quammen, too: "'Write it as if you are talking to one person, a conversation with one person.' And I thought, well maybe that conversation is with me." Nancy Lord would advise her: "Decide you are only going to take up so much room with science. So take this whole section, and put it in three paragraphs."

Sigman managed to adjust. She figured that she was a reasonably scientifically literate person, so she should be able to share with her readers what was important about the science that moved her.

"Because," she said, "science is written in third person as factual information; not as the opinion of the scientist that did the work. You can certainly use what came out of the scientific process. I even showed myself going through the process of looking at the science and learning about the science. Even poking a little fun at the scientists sometimes. I was able to get that distance."

Sigman hopes to use the book as a platform for realizing the emotional impacts of climate change. She'd like to get a travel grant and journey with a scientist, so together they could lead community conversations.

She writes in her book about grieving for a changing Kachemak Bay. But her study of early indigenous residents shows her that this bay, like the rest of the globe, is constantly changing. Her science background lets her know that empirically. But her emotional and spiritual thought process allows for grieving.

She talks about it in terms of nostalgia. "If you accept what was, and who you were, and that it is not coming back, does that mean you can't remember it fondly with positive feelings? No. But if you hold on to that ... you are not moving forward. You are not figuring out how to contribute to a better future."

The book has led her to the goal of living as sustainably as she can in her beloved Homer, much like the Dena'ina who came before her. She calls them the "radical recyclers," who returned everything, including their dead, to the environment.

We think we can all live locally now, she notes, but can we? Can 10,000 people live in a place where once several hundred people lived - without salmon enhancement and all the things we are doing? That is a theme of her book.

Unfortunately for our critical thinking, Alaskans get slotted into roles. You are a greenie or a developer, she suggests; people don't like nuance.

"Part of this book is saying that all these issues are nuanced," Sigman said. "We need to take the time, not the sound bites, to really think through all these issues. And take a position that is principled, but nuanced."

Reading "Entangled" might be a good way to start.

Written by Kathleen McCoy for the UAA Office of University Advancement