In the land of higher education, Peter Renner hit the jackpot. The National Science Foundation will support this UAA senior through graduate school, all the way to a doctorate if he chooses.

Luck has little to do with winning this prestigious (pause for a breath, this is a long title) National Science Foundation Graduate Research Fellowship (NSFGRF). Successful candidates come from top schools that include MIT, Yale, UC Berkeley, Stanford, Princeton, Cornell, among  others. Now, one comes from UAA.

Let's begin with the concept of hard work. It could be Peter's middle name. 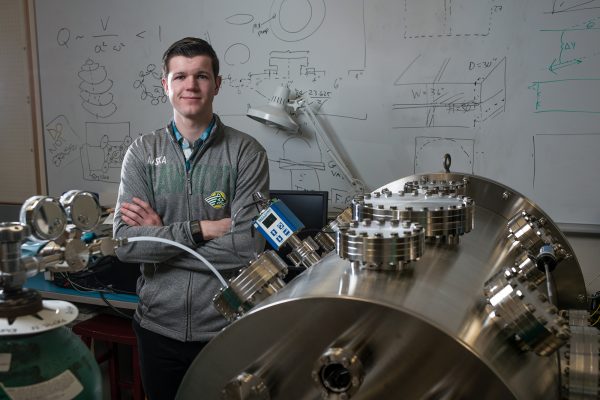 He finished his degree in just three years. That included at least one semester of 22 credits, several at 18, and summer classes, too. He is also one of six founders of the UAA Robotics Club, tutors fellow engineering students and does research in the UAA Plasma Lab under the direction of physics professor Nathaniel Hicks. Oh, and he earned a 4.0 GPA.

He'll start at Texas A&M in the fall.

That all adds up to some incredible drive. So it might be surprising to learn he hadn't exactly planned on graduate school. "I was going full steam ahead, very focused," he said. "I didn't even think of grad school until last fall."

He stopped by to see engineering professor Jennifer Brock, who he'd had for a number of classes. "So," he said to her, "I am sort of thinking about what I will do after I graduate. Is grad school something I'll want to do?"

Yes, yes, yes, Brock said. They talked for an hour. She explained the steps he'd have to take to pursue advanced degrees, including taking the Graduate Record Exam (GRE). And, because she thought he had a good shot, she told him about the NSFGRF.

"I knew he'd be an ideal candidate based on his experience founding the robotics team at UAA and his GPA," she said. "You're competing with the best science and engineering students from all over the country. I only encourage students to go through the process if I think they have an excellent shot of being awarded the fellowship."

She was right. But then, she should know. In her senior year at Ohio State University, a mentor saw the same potential in her. He guided her application, and later her doctoral research, after she won her own NSFGRF.

Think of it as paying it forward. "Now that I am a college professor myself," Brock said, "I enjoy the thought that I have the opportunity to help my students in the same way I was helped when I was in their shoes."

So Peter decided to go for the NSFGRF. He first heard about the opportunity in September. The application was due in late October. In between, he decided to take the GRE, just three weeks after first hearing about them from Brock. The exam fell - inconveniently - right in the middle of midterms. But he went for it anyway.

"I wanted to include it on my NSF application," he said. "If I did well, I could show them I'm really ready for grad school."

He remembers some sleepless nights during the application process, including the night before the very thing was due.

The application required a statement of purpose ("a three-page essay basically telling them about who I am and why I should get the fellowship") and a mock research proposal. The proposal was the toughest. His project crossed several different fields of science, including biology, chemistry, plasma physics, engineering and medicine. He'd taken classes in some of those areas, but to make sure he had things right, he had five or six faculty review his proposal.

"We sent [the proposal] back and forth several times, but it ended up being a big crunch by the end," he said. "I got several final edits back at 9 or 10 p.m. on the night before the application was due the next day at 5 p.m." He didn't sleep a wink. "I finally finishing the essay at 8 a.m., and of course, I had to head right to class."

He said he greatly appreciates the support from Jennifer Brock throughout the process, and for a final last-day edit from Nathaniel Hicks. He'd been working in Hicks' plasma lab on a number of different projects, and one of them gave birth to his mock research proposal. It focused on the theory that it might be possible to blast cancer cells using plasma.

The plasma he's talking about is the fourth state of matter. The first three are solid, liquid and gas. Adding energy to each phase pushes it to the next. Adding energy to gas leads to ionized molecules, or each molecule having a positive or a negative charge. The northern lights are a prime example of plasma, and so are stars.

But back to his proposal. When you generate plasma via air molecules, the air ions turn into what is called RONS, or reactive oxygen nitrogen species. In medicine, RONS can be super deadly to people. Too much of it kills cells, but so does not having enough of it.

In a word, ambitious.

Faculty who know him expect as much.

Hicks said Peter began making significant contributions as soon as he started working in the plasma lab last fall. "One of the things that impresses me most is his ability to work with others on a team, especially across disciplines and topics." He not only moved some key projects along, Hicks said, but "helped his fellow students make exciting connections across their research areas." He credits Peter with helping build a multidisciplinary team of plasma science and engineering student researchers.

Matthew Cullin, the professor he studied with the most at UAA, was equally impressed.

"He is the top 1 percent because he works harder than the other 99. He is meticulous, organized and extremely detail-oriented, and respected by both faculty and peers. Who knows, maybe he'll end up coming back to UAA as a faculty member."

Who is that guy?

Remember the scene in "Butch Cassidy and the Sundance Kid" when Paul Newman looks back at his indefatigable pursuers and says to Robert Redford, "Who are those guys?"

About now, readers must be asking the same thing about Peter Renner.

He is one of six children in an Air Force family (his father flew F-15 Eagles and now flies for Alaska Airlines). They lived in Florida, England, Oregon and finally Alaska. Because of all that moving around, his mom chose to home school all of them. About the time his father was finishing his military career in Alaska, Peter's oldest sister was completing high school. The family was in love with Alaska, and one by one, his siblings began college at UAA.

His oldest sister earned a UAA nursing degree four years ago. The second oldest has a culinary degree from UAA, and works as a chef at a downtown restaurant. Another sister is graduating this May with her nursing degree, the same time that Peter will graduate in mechanical engineering with a minor in mathematics. A younger brother wants to fly like their father, and is eyeing UAA's aviation tech or aviation management programs. The youngest is 12, so too soon to commit, but the momentum is sure there.

UAA is very affordable, Peter said, and after all, he and his siblings had already seen the world. "Living in England for seven years, we probably went to more than 10 countries for vacation," he said. "It was so possible to take one-week trips to Italy or Germany. I had a very good time seeing the world..."

But why work so hard and so fast?

Part of the answer is that Peter got a head start. He took Calculus 1 in high school, which immediately put him ahead. His freshman engineering cohort had to wait to take that class, while he was advancing to Calculus 2 and 3.

He also had a good friend ahead of him in the program. "As soon as I entered, I wanted to try and catch up with him. In all the classes we were in together, we competed to see who could do better in class. That was a good motivation."

He said his toughest classes came in his freshman year, General Physics 1 and 2. After he survived those, "I really wanted to push myself, to see how far I could go, how many credits I could take at one time."

He realized that taking more classes offered advantages he hadn't foreseen. "Classes build off each other a lot more, and when that happens," he said, "you don't have to study for all the classes as much."

Could that be true? He said Physics 2 and Calculus 3 were good examples.

"I literally went from one class hearing about some material and then went into the next class and got the same material again," he said. "The first time I heard it in Physics, I didn't understand it. But I went right into Calculus and they were teaching it again. And suddenly, it made a lot more sense. It really requires less studying time, per credit or class."

Tips from the top

So he's already explained how to take more classes but study less. He has even more advice for students coming up behind him.

"One of the biggest things that helped me was to build a social life through UAA," he said. "You do it by introducing yourself to people you sit next to, and building on those relationships." One of the first people he introduced himself to in one of his first classes is now one of his best friends, he said. But he's also seen students win jobs and internships through these early connections.

Networks like that led to high-quality study groups, and eventually his role as a tutor.

So, get to know a lot of people. And get involved in extracurricular activities. He said his robotics club work really demonstrated the application side of his engineering degree and helped him develop better communication and project management skills. It all adds up.

"I really enjoyed my time here," he said. "I would like to be able to give back to UAA for giving me such a great start in my engineering life."

Maybe that means coming back as a professor one day. Stay tuned.

Written by Kathleen McCoy for the UAA Office of University Advancement