Relaying the need to eradicate polio 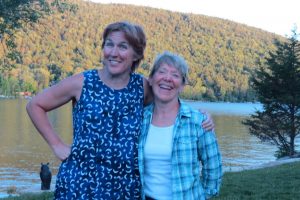 UAA English alumna Bridget Simpson (left) has partnered with Louise Rourke (right), who contracted polio when she was six months old, to swim the 32-mile Lake George in New York as a tag-team relay. The swim is also a fundraising event to raise awareness for polio eradication and to stress the importance of vaccination. (Photo courtesy of Bridget Simpson)

To celebrate her 50th birthday last year, UAA English alumna Bridget Simpson decided to swim the 32-mile Lake George in New York, becoming the 11th person in 60 years to do so.

"The way I felt at the end of my solo swim last year, I don't ever want to feel like that again," she recalls.

Well, she's doing it again. But this time she's bringing a friend.

Enter Louise Rourke, who is an adept swimmer despite contracting polio when she was just 6 months old resulting in the paralysis of her right leg. Together with Simpson, they will swim Lake George in a tag-team relay. Both swimmers plan to start the first six miles together and then alternate every five miles. The estimated time to complete the swim is 24 hours.

The landmark feat was organized to raise awareness for polio eradication and to stress the importance of vaccination.

According to the Centers for Disease Control, the United States became polio-free in 1979 - 24 years after the first polio vaccine was administered in the U.S. in 1955 - and just one year after Rourke was born in 1954.

Although the World Health Organization has declared the Americas, Europe, Southeast Asia and Western Pacific regions of the world polio-free, the spread of the virus was never stopped in a small number of countries, continuing to put the world at risk.

Polio, or poliomyelitis, is a crippling and potentially deadly infectious disease caused by the poliovirus. There is no cure for polio, and vaccination is the only way to eradicate it.

The 32 miles that spans Lake George will begin in the appropriately named Lake George Village and end at Diane's Rock in Ticonderoga. The location of the finishing line was named after Diane Struble, who was the first person to swim across Lake George in 1958 - an event Rourke was there to witness when she was 4 years old. 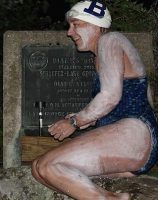 Simpson at the Lake George finishing line at Diane's Rock in 2017. The location is named for Diane Struble, who was the first person to complete the swim in 1958. Simpson is the 11th person to finish the swim. (Photo courtesy of Bridget Simpson)

After hearing about Simpson's similar accomplishment, Rourke sought out Simpson at a local swim group to bond over their shared love of the water. Unbeknownst to Rourke, Simpson happened to have a history of instructing swimmers with polio during her 30 years as a certified swim instructor. She taught her first student swimmer with polio when she gave lessons through UAA's Northern Lights Swim Club as she finished pursuing her bachelor's degree in English in '93,

Simpson taught her second swim student with polio when she relocated to Maryland after graduating. In addition to perfecting some of the accommodations that need to be made for swimmers with polio, she discovered how much more she enjoyed swimming in open water as opposed to swimming in a pool.

"I saw a news article about a group that was swimming across Lake Champlain from New York to Vermont. I got intrigued and that got me going," she says. "I trained for a year and did my first open water swim in 1999 and just kept going with it. That summer I ended up doing an 8-mile swim, the Lake Champlain swim. When I finished in Vermont, I looked back at New York state and said, 'Gee, I'd rather swim back than drive.' It was a major turning point for me as far as distance swimming goes."

Over the course of a few weeks, Simpson was able to offer Rourke additional coaching to help improve her technique. Always looking for the next challenge, Simpson asked Rourke if she ever considered tackling Lake George, just like she saw Diane Struble do all those years ago.

At first, Rourke was hesitant. But after Simpson suggested approaching it as a tag-team relay, she was on board.

Once details of their endeavor started to solidify, the duo approached the Saratoga Springs Rotary Club to gauge interest in organizing a fundraiser for the swim. The opportunity was a perfect fit as it aligned with their own long-running efforts to get rid of polio. Rotary International launched their Global Polio Eradication Initiative in 1988.

Much like Simpson found a great swimming partner in Rourke, Rotary found a great fundraising partner in the Bill and Melinda Gates Foundation, which has agreed to match donations 2-to-1. Among other philanthropic efforts, the Gates Foundation is a huge proponent of polio elimination and immunization and has contributed more than $35 million to the cause over the years.

Joining the team of swimmers and fundraisers is the support crew - boaters and paddlers whose job is to follow alongside Simpson and Rourke via kayak to make sure they remain on course for the 32 miles and to provide them food and water. The support crew is largely made up of first-timers - friends and family of the swimming pair who wish to offer support for such a monumental task. 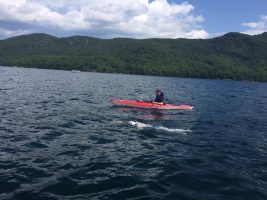 Simpson first swam Lake George solo in 2017 to celebrate her 50th birthday. Her son Quinn, who was born at Elmendorf AFB while Simpson finished her bachelor's degree in English at UAA in '93, followed next to her in a kayak to provide support.

"I don't think there's anyone on the crew who's done this before. But they've all given us time and generosity of spirit," describes Simpson. "The crew is what makes or breaks it in a very real way. What Louise and I are doing, we could not do alone. A marathon swim is a team effort, always."

The event is weather dependent and will occur on the best weather day between July 30 and Aug. 3. Not having a set schedule for an undertaking so elaborate can often result in a perfect storm. But once again, Simpson offers nothing but praise for her crew's willingness to go with the flow.

"We broke it down in a way that is totally unheard of for marathon swimming," she explains. "Normally you have the same crew start to finish. But we have people shuttled to and from our boat in shifts so nobody has to be on the lake for more than a few hours except for me and Louise, as well as her husband, son and daughter-in-law. Not everyone is available each day, so we have five schedules set up, including alternates. These fabulous volunteers have been training to learn the skills needed to escort marathon swimmers."

With the big swim happening any day, Simpson and Rourke remain dedicated to their training regimen while waiting for the perfect weather to launch. With every detail and variable accounted for, all that's left for the pair to do is look back at how far they've come and start planning for the next adventure.

"I'm sure that a year ago, Louise would never have thought she could do this. I wouldn't have because a relay just didn't seem like an option," says Simpson. "But anyone who wants to, can. If it's calling to you, you've got to give it a shot."

"Relaying the need to eradicate polio" is licensed under a Creative Commons Attribution-NonCommercial 4.0 International License.