Playing for the same team 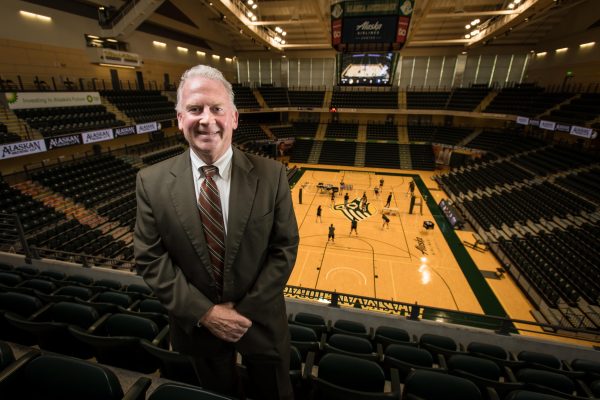 "Whoever is reading this, you can be an important part of UAA Athletics' future," proclaims Greg Myford, new athletic director for UAA.

Suffice it to say, Myford knows a lot about strengthening the ties that connect community outreach, student success and athletic development.

Before moving to the country's most northwestern state, Myford lived in the United States' most southeastern one in Tallahassee, Florida. There, he spent five years as general manager for IMG College, the largest collegiate sports marketing company in the U.S.

In his role at IMG, Myford was responsible for managing the brand and rights, and procuring sponsorships and partnerships, for Florida State University Athletics.

Prior to that, Myford spent a decade working as the associate director for business relations and communications for Penn State University, his alma mater.

"I like to refer to my role at Penn State as a mile wide and an inch deep, and my role at Florida State as an inch wide and a mile deep," he recalls. "Both were invaluable in preparing me for my new role here at UAA."

As UAA's athletic director, Myford's role now resembles the Mariana Trench. But since beginning his duties in July, he has hit the ground running, or rather, hit the water swimming.

Myford's mission is to meet with every UAA Athletics employee - more than 60 people - and learn what everyone's goals, needs and concerns are within his first 100 days on the job. From there he plans to develop a needs report that will provide a top-to-bottom assessment of the department.

"So far it's been incredibly informative," Myford shares. "At the end of that 100 days we'll be in a much better position to assess where Athletics finds itself and where we need to go."

Not only will Myford's thorough understanding of UAA Athletics help him steer that department toward greater success, but it will also allow him to better position Athletics to support the university's mission as a whole, which he describes as his top priority.

"It's important for everyone to understand that Athletics' purpose is to provide an educational component to all of our student athletes, and in doing so being in full support of the mission of the university," Myford says. "My No. 1 responsibility is to make sure we are."

One of the ways he aspires to do that is by parlaying media coverage normally allotted to sports activities to other areas throughout UAA. It's a subject in which Myford has plenty of expertise, having earned a B.A. in broadcast journalism from Penn State and worked in the emerging cable sports broadcasting industry in Washington, D.C. and Baltimore.

Two other areas where Myford will be concentrating his efforts is fundraising and engagement, which he considers to be intertwined.

"Fundraising starts with relationships. One of the ways I'm approaching that is where are our relationships and where do they need to be?" he says. "What's clear is that we do need to participate in and support the community, because I believe when you do, that gets returned to you. Some of that will be in the form of fundraising, some will be in the form of engagement."

With his development plan well underway, all that's left for Myford to do is find the time in his hectic schedule to prepare for his first Alaska winter. Naturally, he's got a plan for that, too.

"I'm not fully ready after moving here from Tallahassee with whatever fit in four or five suitcases. But having lived in Pennsylvania and Michigan, I know what to expect. Although the darkness is something I'm not used to."

"Playing for the same team" is licensed under a Creative Commons Attribution-NonCommercial 4.0 International License.