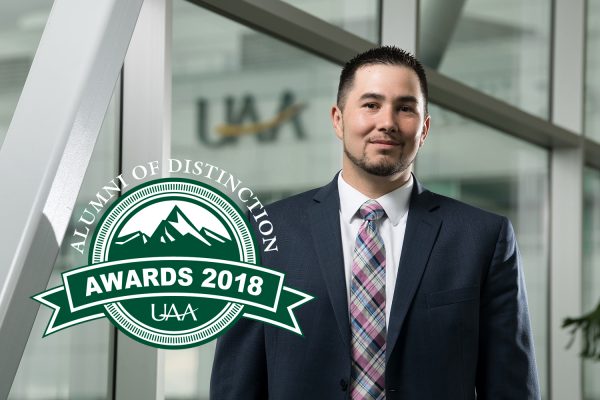 Growing up, Jason Hart always knew that he wanted to help people. Originally, that meant becoming a cop, taking inspiration from the cheesy Steven Seagal action movies that are synonymous with the '90s. Then at the age of 12, Hart tragically lost his mother to post-surgical complications. It became clear that the way he was going to help people was by making health care for Alaska Natives better.

"I knew at a young age, living without my mother, that I'd like to prevent others from living through the same tragic situation I lived through," he shares.

Wasting no time, Hart devised a three-step approach to work toward that goal, consisting of: earning his degree, securing a position at Alaska Native Tribal Health Consortium (ANTHC) and learning everything he could about the communities he wanted to help.

To pay for school, Hart served in the Air National Guard. In that time, he demonstrated his ability to go above and beyond, not only receiving the Excellence Award for exemplary service with the Army and Air Force Exchange Service, but also getting a head start on his education by completing his associate degree in mechanical and electrical engineering from the Community College of the Air Force.

While completing his seven years of service in the National Guard, Hart also made fast work earning his bachelor's degree from UAA in 2007. He immediately used his new degree to land a position in ANTHC's HR department as an associate employee benefits administrator.

With his foot finally in the door, Hart quickly became a rising star. The following year, he was promoted to benefits administrator after demonstrating a quick grasp of the job. And the year after that, when the outgoing benefits manager was promoted, Hart was the obvious choice to fill his shoes. This put Hart in a position of managing a small staff, and handling a $14 million annual health insurance plan and a $96 million retirement plan just two years after graduating college.

Being the new benefits manager also meant additional exposure to the consortium's executive team. Sensing Hart's talent and desire to excel in the organization, leadership provided him opportunities for growth, including operational experience at the Alaska Native Medical Center. Hart welcomed the opportunities and accepted the role of clinical practice manager in 2016.

As clinical practice manager, Hart oversees the neurosurgery and pain management clinics. In addition, Hart has used his UAA education and Six Sigma training to breathe new life into some of the departments he oversees, finding opportunities to improve processes and strengthen employee engagement.

Perhaps sensing Hart's readiness to take on additional responsibilities, ANTHC tasked Hart this past July to serve as acting vice president of medical and multi-specialty clinics at the Alaska Native Medical Center. In this role, Hart is responsible for the administration of more than 20 specialty clinics, including cardiology, neurology, pulmonology, internal medicine and oncology.

Hart also makes a point of dedicating time to volunteer. His long record of community service includes helping with the Food Bank of Alaska, mentoring at the Alaska Military Youth Academy, and sitting on the Alaska State Commission for Human Rights and the Ahtna Inc. board - his ANCSA Native corporation.

The purpose of Hart's volunteer work is twofold: to give back to the community, and to continue learning so he may help the people he serves.

"I try to make it a priority in my life. I want to be a well-rounded individual, and those experiences help me look at the issues from varying angles. It's helpful to have a general understanding of how situations are handled in different arenas and different types of organizations," he explains.

Speaking more specifically about his work with Ahtna Inc., Hart continues, "When my mom passed, I basically lost connection to my family in the Ahtna region. It was my sister and me raising each other for some time. So joining that board was another way to connect back to my heritage, my people, and to start getting more involved in the communities in any way I could."