The 49th state ranks first when it comes to women entrepreneurs 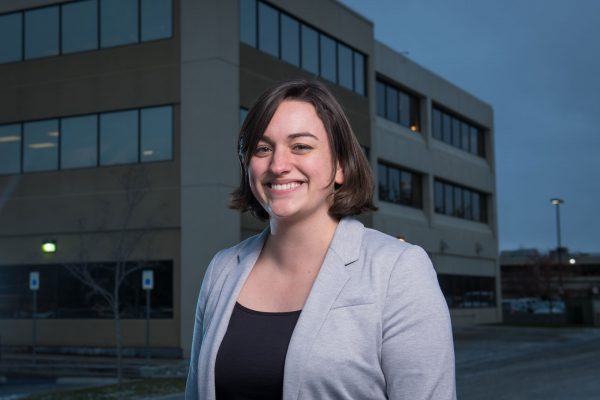 Lead analyst for UAA's Center for Economic Development and economics alumna Richelle Johnson recently published a study reporting that 26 percent of all employer firms in Alaska are female-owned, which is the highest in the nation. (Photo by James Evans / University of Alaska Anchorage)

According to a recent CED report, 26 percent of all employer firms in Alaska are female-owned, which is the highest in the U.S. The majority of those businesses are less than 5 years old, with 71 percent having fewer than five employees and 15 percent earning more than $1 million in annual revenue.

The data also suggests that these female-owned companies are driving job growth in Alaska, with 89 percent of new employment in the private sector stemming from business that are less than 5 years old. 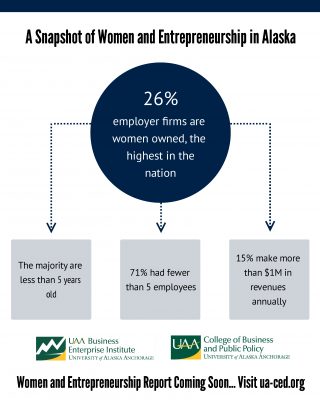 An infographic on women and entrepreneurship in Alaska.

Lead analyst on the project and UAA economics alumna Richelle Johnson has some theories as to how Alaska might be leading the nation in women entrepreneurship.

"There's no specific data to support this, it's kind of observational, but I feel like it's the Alaskan spirit. If there's a problem, you just fix it, you do it, you find a way around it, she posits. "Because our state is so young, we don't have a lot of embedded gender dynamics, but also the women here are really strong and tough."

The study originated from CED associate director Gretchen Fauske and UAA College of Business and Public Policy dean Karen Markel, who wanted to present the findings during a Women's Entrepreneurship Week celebration event in October. Johnson, who describes the lead analyst position as her dream job, jumped at the chance to take on the assignment.

"Most people don't like numbers, but I love data," she shares. "It wasn't until college that I discovered I was good at crunching numbers and liked having numbers to back up the things I was observing in the world. I also wanted to help people and economic development seemed like a good way to combine the two."

Even for someone who is passionate about data analysis, sifting through an amount on a national scale is a monumental task. Thankfully, Johnson didn't have to start from scratch. She was able to find existing studies on female entrepreneurship at the national level published by the Kauffman Foundation, Forbes and Harvard Business Review. Pulling entrepreneurship info at the state level was a little bit more tedious as Johnson had to interpret raw data from various censuses.

Since unveiling her findings, Johnson describes the most surprising reaction to the study was unsurprise, particularly from those already in CED or the Alaska entrepreneurship community. After having front row seats to the proliferation of women in local startup competitions and conferences for years, for them it's good to finally have the numbers to confirm their impact.

Johnson's findings are part of a more comprehensive snapshot of women business owners in Alaska that was fittingly released on Women's Entrepreneurship Day on Nov. 19. For that larger project, Johnson and Fauske ventured to interview the business owners behind the numbers to learn about their experiences.

"There are so many inspiring women out there," explains Johnson. "There are businesses I'd never known about, and businesses that I did know about and frequented a lot but didn't know were run by really amazing women with fantastic stories about their struggles and their gains."

Before completing the project, Johnson says the plan is to write an op-ed with Fauske with recommendations on how to continue strengthening Alaska's community of female entrepreneurs. From there, Johnson hopes to use this study as a jumping off point to conduct similar research into other entrepreneur communities.

Even though that means pouring over two new mountains of data, Johnson embraces the opportunity to use her number crunching talents to enact progress.

"The CED is placed really wonderfully within the community. We do so much research and one-on-one work and strategic planning with communities, and it combines so many of my passions for data, planning and also helping people. Just based off the four months I've been here, I've seen people be inspired to work toward real change for some of the communities - I get to help make a difference and I get to see that change." 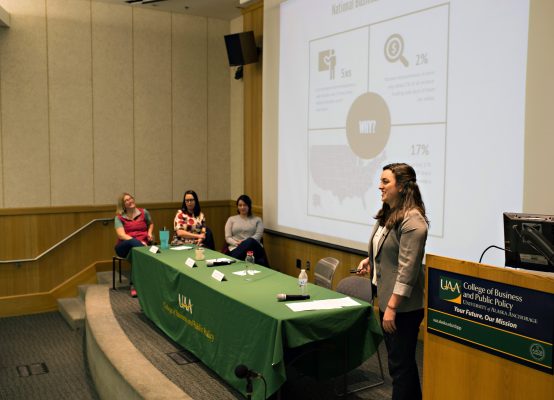 "The 49th state ranks first when it comes to women entrepreneurs" is licensed under a Creative Commons Attribution-NonCommercial 4.0 International License.