Creating stories through science and birds

When you think of stories, you often think of ones you've read in books, maybe a funny one told around the table during the holidays, or cultural stories handed down from generation to generation to pass on a moral lesson or idea. What doesn't always come to mind is science, and that among all the numbers, graphs, percentages and data is a story - a scientific one that shapes everything from the building of infrastructure to developing policy around environmental issues. But scientific stories are important, and Michael Mueller, professor of secondary education in UAA's School of Education (SOE), has dedicated the past 20 years of his career to help youth and their educators become citizen scientists, look beyond the classroom, and learn to document and tell those science stories. 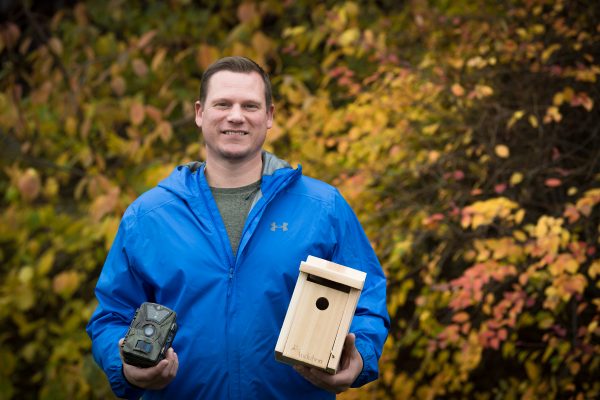 Education professor Michael Mueller created Youth Birding Alaska, a project funded through the UAA Center for Community Engagement and Learning, that provides teachers across the state with bird habitat kits to get students out of the classroom. (Photo by James Evans / University of Alaska Anchorage)

"By helping teachers and students become more engaged in local decision-making through science and environmental education and place-based education, they [students] can participate and have an impact on making decisions that will affect their future," said Mueller.

Mueller's latest project, Youth Birding Alaska (YBA), funded by a Center for Community Engagement and Learning (CCEL) grant, provides educators all over the state with a bird habitat starter kit, which includes birdhouses, feeders, binoculars, a spotting scope, journals, nature and birding guides, as well as curriculum activities for students to monitor, record and study the birds that come to live and nest in the created habitat. He said that monitoring birds is just challenging enough for young scientific researchers and is a great way to introduce phenology - the study of cycles and seasons in natural phenomena in relation to climate, plant and animal life - essentially the story of an environment.

"What that does is gives us a story, a scientific story, that the kids can tell, that will help them to understand what's happening with birds in relation to the environment," Mueller said. "That story can be used when they go to work with policy-makers or local decision makers, it could be used to determine whether to develop a habitat here in Anchorage or in Alaska somewhere. It's just this powerful medium for them to say, 'I can take ownership in my future and I can participate in the decision-making that is going to affect the environmental integrity, but also the cultural integrity, of a place.'"

Which is Mueller's goal with his project, to not only inspire youth to be excited about environmental science, but to make the important connection between people and the environment - that it's all connected and that our decisions as a society have a direct impact on our habitats, which directly affects culture and how one may identify with oneself.

For the past five years, Mueller has partnered with Lake and Peninsula School District and Bristol Bay Borough School District to provide weeklong workshops focused on place-based education that helps students focus on and monitor their environments. From these trips, where Mueller brings School of Education students along to assist with the workshops, the bird habitat project emerged. He said one of the workshops he and his students taught in the schools was a birding class, where students were taught how to monitor local birds and how to create a bird habitat at their school.

"We asked the teachers if they would be interested in us writing up a grant to build a habitat at their school, and a few teachers took me up on that at the Newhalen School," Mueller said. "So we wrote a grant and built a bird habitat."

From there, the project took off. Mueller conceived the idea of YBA and focused his efforts on expanding the project to 10 more schools. Which brings us to the present - Mueller is focusing his attention on acquiring 10 schools to participate in the project. 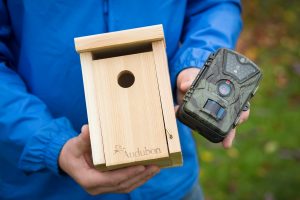 Mueller displays the birdhouse and camera used by students to monitor birds in the habitats he helps install at their school. (Photo by James Evans / University of Alaska Anchorage)

Currently, Mueller's office is filled to the brim with bird habitat supplies. The floor-to-ceiling shelves in his small office are now devoid of books, save for a few of his favorites, and instead are packed with birdhouses, feeders and the equipment needed to supply teachers within creating a bird habitat space at their own schools.

Mueller's project has grown since its inception a few years ago and he's since brought on CCEL Community Engaged Student Assistant students Lauren Casey, a first-year master's student in the SOE, as well as Erin Ingle, a master's student in SOE's teaching program. In addition to bringing students on board, Mueller also has two elementary school teachers from Homestead Elementary School to help with the project.

"I had a distinct memory - and this is why I locked onto the project - when I was a kid, I used to stand outside my parents' house and watch swallows all over the place, dipping and diving and eating mosquitos, and I thought they were beautiful," said Ingle. "As I grew up, they disappeared and I didn't know why, and it stuck in my head."

Ingle said she wondered if the scientific impact would be greater if kids were able to get out of the classroom and watch birds, and that maybe being more aware of their own environment would translate to their decisions in life now and down the road.

"My goal is to make children more aware, not necessarily to become a bunch of birders, but to be watching and looking and interested in the environment around them," she said.

And that is the biggest goal and hurdle of this project: challenging youth and adults around the state to become more aware of their environment and their impact on it through the YBA project.

"The human and the natural systems are linked and we cannot separate them," Mueller said. "If we're looking at the integrity of the environment, we're also talking about the integrity of culture." And for Mueller, that is most important - protecting the stories, the identity of the people, and the cultures that all call Alaska home and will continue to call home for generations to come.

"Creating stories through science and birds" is licensed under a Creative Commons Attribution-NonCommercial 4.0 International License.