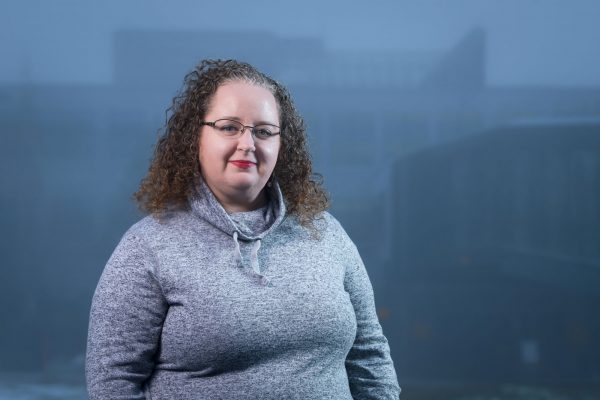 "Ten years ago in Colorado, I was under a lot of stress. I didn't know what to do, it was very frustrating and I felt that I hit a wall. I wasn't going anywhere or advancing in my career and just needed this change. So one day out of the blue I decided to move to Alaska. I packed up, sold what I could and put everything else in storage," she recalls.

Irwin made the expedition north with her son, mother and then-husband. She originally planned to stay in Anchorage for only a few years - a habit that carried over from her younger days when her mother was in the U.S. Air Force and moved from place to place. That was 10 years ago.

Once she settled into her change in scenery, Irwin decided to kick-start her change in career by enrolling at UAA. At that point, it had been 15 years since she graduated high school, during which time she raised her son, who Irwin considers her greatest inspiration.

"Most freshmen have their parents to help them, but I was pretty much here on my own," says Irwin. "So I just decided to go to the enrollment office. I didn't really look for where it was, I just parked and in the first building I went to, in the first door was the DSS office. It was destiny."

Disability Support Services was able to help Irwin - who was born Deaf - register for classes, apply for financial aid and make arrangements for an ASL interpreter. Years later, she was even able to take a student worker position in the department, resulting in her serendipitous first-day visit to DSS paying off both literally and figuratively.

For Irwin, the decision to trade the Rocky Mountains for the Chugach Mountains was much easier than picking one of her passions to parlay into her major, and ultimately, her career. Eventually, Irwin chose to build on her lifelong love of writing and her existing photography and graphic design skills by studying journalism, narrowly beating the alternatives to study literature or anthropology.

"Journalism was a totally new experience for me. I really love the ability to research and write about such a broad range of topics," shares Irwin. "As a deaf person, it's more challenging to get a job. With this degree, I have so many options at my fingertips under the scope of journalism. UAA opened that door for me. Everything fell into place and I don't regret a single minute."

As UAA's first Deaf student commencement speaker, Irwin is already making Seawolf history. But she's also leaving behind a legacy that will benefit students and teachers across the entire UA system for years to come. Through her independent study course, Irwin has conducted much-needed research into the overall effectiveness of DSS.

"The feedback we got was that we were only doing a fair job. So we needed to learn more about our services and how people are interacting with them," she explains. "We also wanted to increase training availability for the professors and staff - to really have them understand what accommodation and visibility means. We wanted to know how we can improve our outreach to professors and how to empower them to make it better for students."

Irwin overhauled the DSS survey and even created a new one specifically for staff and faculty. And so far, the response has been overwhelmingly positive. In addition to simply having current data, Irwin has received more feedback than DSS has ever seen. For context, the last DSS survey conducted all the way in 2011 only received input from 40 students. This year's survey received more than 100 student responses and over 300 staff and faculty responses.

"Now we get it, we know what we need to improve, how to improve it, what people are satisfied with and what they're not," Irwin describes. "Plus, our initiatives align perfectly with UAA's 2020 goal of improving services for students. The research isn't just benefiting me, DSS or UAA, but it's benefiting all the sister campuses. We can act as that lighthouse for them to look to and see what they can do to serve our disabled students more effectively."

At the time of this writing, Irwin is still sifting through the mountains of data and compiling her findings in a final 30-to-40 page report. As for her other big task before graduating - prepping for her student commencement speech - she's already got that covered. Not only is her speech already written, but as her high school valedictorian, speaking at graduation is an experience she's already used to. All that's left is completing her report.

"It's a long process but it's definitely worth it. My research should, or will be done the day before graduation," Irwin jokes.