Mongolia - an expansive nation sandwiched between China and Russia - is 3,807 miles away from Alaska. Home to world-renowned Gobi in the south and with mountainous terrain throughout, the country's geography is not the only surprising commonality with the U.S.'s only circumpolar north state. Among the many similarities between the two, some of the biggest are that both Alaska's and Mongolia's economies are resource-driven, both governments face the challenge of providing support to urban and rural populations and both have strong indigenous cultures. 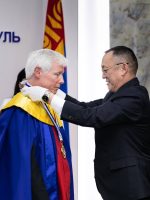 "There's a lot we could learn from Mongolia," said John Duffy, adjunct professor in UAA's College of Business and Public Policy (CBPP). Duffy was recently awarded an honorary doctorate from the National University of Mongolia's (NUM) School of International Relations and Public Administration for his work in the public administration program as a guest professor over the past three years.

"It was a big shock," Duffy said of learning about the award. "I was pleasantly surprised." Duffy's award was the quickest this type of award has been bestowed upon an individual; he said usually these types of honors are granted after 10 years of service. But on an ordinary day, as he was working on an upcoming lecture for one of his classes, he learned that his NUM peers had all voted for him to receive the honor, and Duffy was said he was humbled by the gesture.

Duffy graduated from UAA with a bachelor's in political science in 1979 and in 2016 earned a Ph.D. in natural resources from the University of Alaska Fairbanks. He's worked in public policy and natural resources for the majority of his career and recently joined UAA as an adjunct professor in CBPP in 2015. About three years ago, his career took him to Mongolia when he volunteered with the Open Society Forum-Mongolia, a branch of the Open Society Forum, which is an international organization that collaborates with governments to help facilitate the building of successful democratic societies.

Duffy decided since he was already working with Open Society in Mongolia to help educate local government officials in leadership training, that he would reach out to NUM to offer his expertise to students, faculty and staff.

"The next thing I know they have me teaching classes," said Duffy. "Over time it's become more formalized. Now I'm teaching their master's and Ph.D. students, and in addition, I'm also being sent out to provide executive management leadership classes to senior staff in the governor's offices in the various provinces."

Duffy said his work in Mongolia, which takes place over the course of a couple months in the fall and a couple months in the spring, is a mix of academic and professional development training work. He's traveled to nearly every corner of the country and has been surprised by how similar the central Asian country is to Alaska, and impressed with the wealth of knowledge shared with him on public policy issues.

Part of Duffy's success in Mongolia was the result of helping facilitate a partnership agreement between UAA and NUM, which was signed in fall 2017.

"Right now we're identifying joint research and work efforts, and hopefully soon we will have student and faculty exchanges," he said. 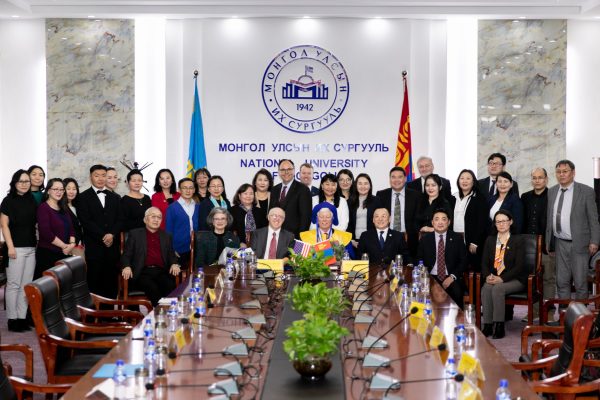 Duffy said because Mongolia and Alaska have so many commonalities in terms of geography and economic and cultural issues, there is a lot the two places can share with each other, and that we have been able to share our ability to deliver quality distance education and health care, while they have shared ideas on how to combat climate change issues and offer government support programs when geography is a literal obstacle. Throughout his travels through the "countryside," what Alaskans would call the Bush, Duffy said he's learned a great deal about the nomadic, herding culture and has gained a better understanding of how public policy is integrated into Mongolian government, something he said has enriched his teaching at UAA.

"I've learned a lot and it's really helped me with my teaching here [at NUM], as well as at UAA," Duffy said. "I've gotten a better understanding of different ways of tackling similar problems."

"Mongolia introduced a lot of very important public policy and public administration concepts to the world," said Duffy, explaining that the country introduced concepts like freedom of religion, peaceful transfer of power and the encouragement and protection of international trade. Additionally, he said the country was also an early adopter of recognizing women and their valuable contributions to society and addressing gender equality issues, as well as pushing the idea of public education. "This was all like 1,000 years or so ago, so it's pretty amazing what they've introduced to the world as far as public policy and administration."

Duffy said he will continue his volunteer work in Mongolia and is excited to see what educational opportunities will result in the NUM and UAA partnership agreement.

"When you're attempting to teach, it's really important to continue to learn," Duffy said. "I think it's important, in every field, to understand what's going on in other cultures, and our nation has a lot to learn; we are pretty great, but there's a lot of other countries out there that have good ideas, too. So it's good to learn about different cultures and perspectives so you can think, 'How can I apply this back home?'"

"The Mongolia connection" is licensed under a Creative Commons Attribution-NonCommercial 4.0 International License.