Each year, the University of Alaska Anchorage's Diversity Action Council awards the Student Diversity Award Scholarship to students who significantly enhance diversity at UAA by increasing visibility of diverse people, cultures and/or perspectives; creating a welcoming environment; and/or representing diverse student voices through their advocacy and participation in UAA student organizations. The council picks the top applicants from across the university to receive a tuition grant up to $1,000. Read more about five of this year's awardees. 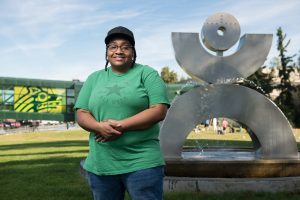 Social work senior Jennifer Spencer photographed on campus in fall 2018 for her work as a member of UAA's New Student Orientation Wolf Pack. (Photo by James Evans/University of Alaska Anchorage)

Four years ago, Jennifer Spencer, a UAA senior and social work major graduating this spring, never imagined the opportunities that would unfold during her time as an undergrad. Spencer has been involved in many facets of UAA life, not only as a student pursuing a career in social work, but also in her work as a New Student Orientation leader, a member of the university's grassroots Hunger and Homelessness Support Network, and her involvement in various campus clubs and activities.

She jokes about senioritis being a real thing, but in all seriousness, Spencer has spent her time at UAA working hard to make a difference on campus through her various endeavors.

"If you don't feel like your college experience is developing or changing, I would advise someone to join a club or figure out an issue that you're passionate about, go head on with it and find a group of people who are just as passionate as you," she said of finding your niche at UAA.

This semester, she has a practicum with Child Welfare Academy and is working with youth who are currently or were formerly in the foster care system and are now pursuing a postsecondary education at UAA or elsewhere.

"I'm just helping them to make sure that they're successful and that they have all the support that they need," she said. "I would love to continue working with students, our homeless population, whether that's with youth or university students, and I'd like to continue to work on food insecurity on our campus and in our community."

Spencer said she's not sure what her next step is after graduation in May, but she does know that eventually she would like to pursue her master's degree. For her, the Student Diversity Award Scholarship was the culmination of her undergraduate career at UAA and she's looking forward to the next phase. 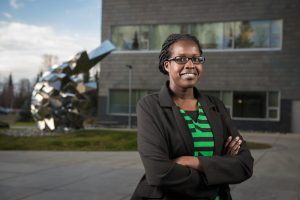 Health sciences senior Nyabony Gat was on the medical degree track until she got involved in UAA's Center for Community Engagement and Learning and found a passion for community and public health. (Photo by Ted Kincaid / University of Alaska Anchorage)

Born in Sudan and raised in the U.S., Nyabony Gat had her future career all mapped out. She enrolled at UAA as a health sciences major and intended to follow the medical track with hopes of one day becoming a family physician. However, over the course of her four years at the university, she discovered a passion for community and public health.

It was during her sophomore year that Nyabony learned about UAA's Center for Community Engagement and Learning (CCEL) Community Engaged Student Assistant (CESA) program. She applied for a CESA position and was paired with Nancy Nix, associate professor of public health in UAA's Department of Health Sciences, working on a situational analysis for Alaska medical projects. This experience was the catalyst that changed the course of her undergraduate experience.

"That project really ignited the kind of opportunities I wanted to have," Gat said. The project also launched her community engagement on campus, from her involvement in student clubs, like the Black Student Union and the American Sign Language Club, to peer mentoring through the Multicultural Center. "In high school I was engaged in different clubs, but really I think it began when I came to the university and started to seek engagement opportunities."

Gat said she wanted to connect to the larger UAA campus community and feel like she was a part of something bigger and making a difference. Her freshman year she just focused on school and work, but felt like something was missing, which is what motivated her to become more active on campus.

"I think it's very easy to enter the university and fall into the trap of just going to class and forget about the other piece of civic engagement or trying to discover where you fit in," she said. "The more I got involved the more value I saw."

For Gat, being awarded the Student Diversity Award Scholarship is a huge honor and is a culmination of all her hard work as a civic-minded student.

"One of the biggest things I've learned as a student, is that diversity goes beyond just race and ethnicity, it really encompasses people's background and life experiences and whatever identities they may hold," she said. "Those are all important to bring to the table to create environments that make people feel welcome. I think this award highlights that." 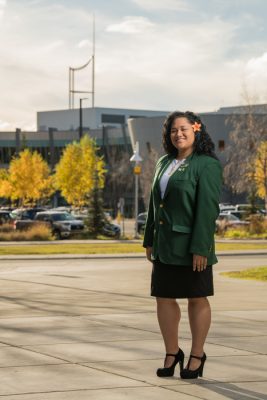 Tammalivis Salanoa, digital art and design senior, was first introduced to UAA when she was attending Clark Middle School, and it has felt like home ever since. (Photo by Ted Kincaid / University of Alaska Anchorage)

Tammalivis Salanoa was a student at Clark Middle School when she was introduced to UAA through Leo Medal, the Multicultural Center's student success coordinator, who at the time was UAA's TRIO Educational Talent Search program advisor.

"I didn't know that was a pivotal point in my education because from then on, I was basically on UAA's campus, taking courses, nothing that was credited, they were all fun courses, like culinary," said Salanoa, who said she'd walked into Medal's office on a campus tour to snag some Goldfish crackers. As a middle school student, Salanoa had the opportunity to take classes at UAA from art to baking and met middle school students from across the city. "It was fun getting to know and be a part of the TRIO family, who are still here at UAA."

In addition to a full load of classes, the digital art and design senior is involved in many campus clubs and organizations, from working as the public relations director for USUAA, to working in UAA's Upward Bound program, to starting the Hickory Animation Club on campus. And those are just a handful of her on-campus activities. Off campus, she volunteers for the World Affairs Council, is on the Municipality of Anchorage's Youth Advisory Commission, serves on the board for the nonprofit Open Door Mission and participates in the Red Cross's Disaster Action Team.

But Salanoa is casual about it all. She believes in being involved and learned early on that UAA is abound with opportunities to enhance your university education. She feels a lot of it has to do with UAA's supportive staff and faculty.

"I didn't think it was somewhere I'd potentially be attending in terms of postsecondary education, but as I got to my senior year in high school, I realized that there was really no other choice," said Salanoa. "I just felt so at home on this campus and knew where everything was; I knew so many faculty members and it was just a home away from home." 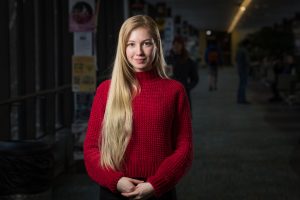 "I just wanted to do as much in my college years to reach my goals and pursue my dreams, which is why UAA became a part of my journey," said Lana Suvorova, a finance major. Originally from Russia, Suvorova graduated from the university in her home city and transferred to UAA through the sister-city program. She'd had a few friends who attended UAA through the program and highly recommended she take the opportunity to come to UAA. For Suvorova, it was an opportunity she couldn't pass up and it was the first time she experienced living in an English speaking country.

Her first year at UAA was challenging. She couldn't speak English very well, but as time went on she branched out and got more involved in campus life. Opportunities began to open up.

"I've served as a senator for USUAA and worked on improving the communication between students, the administration and just campus life in general," she said. As an international student, she said she understood the struggles of other foreign students on UAA's campus and felt strongly about serving as their voice and advocating their needs. She was voted as USUAA's chief diversity officer. "I found myself in a good place where I could express all my ideas and concerns for students who came here from different backgrounds who were pursuing their dreams."

In addition to serving on USUAA, Suvorova was also one of the founding members of the Russian Culture Club, which she said is something she's especially proud of. "We encourage all types of students to join our club, not necessarily just Russian speaking students," she said.

For Suvorova, the Student Diversity Award was a way for her to showcase the work that she's done in her advocacy role of helping international students have a voice on campus.

"I was really happy to receive the award," she said. 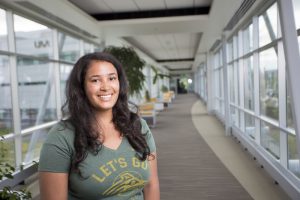 UAA junior in the College of Health's dietetics and nutrition program, Edna Standifer is working toward her goal of becoming a registered dietician. (Photo by Ted Kincaid / University of Alaska Anchorage)

Originally from Tyonek, a small village of about 150 people on the northwest side of Cook Inlet, across from the Kenai Peninsula, Edna Standifer was raised in her traditional Native culture. She spent her summers helping her family fish and gather food for the winter. She misses the simple, slower pace than city life, but she's focused on school and is grateful for the opportunity to be at UAA.

"I think UAA's health programs are very competitive and beneficial because we do the book work and take the tests, but we also do a lot of community engagement," said Standifer, who said she appreciates the thoughtfulness and intention her professors put into their coursework. She chose to major in dietetics for a couple of reasons, partly because of the preventative nature that nutrition plays on the body biologically, and also because Alaska faces challenges in health and nutrition.

"Growing up in rural Alaska our geography was a bit of a health barrier to me because we had to fly somewhere," she said. "Like when I was sick you just just kind of said, 'Oh well,' because we just didn't have that access to health care." Standifer said it's not only rural Alaska she sees these health barriers; living in Anchorage the past few years she's seen obstacles as well.

After graduation, she plans to pursue work as a registered dietician and hopes to get into research to help educate Alaskans about the value of nutrition.

When Standifer is not focused on her coursework, she's involved in UAA's Native Student Council, which is recognized as one of the more active clubs on campus.

"We do a lot of community engagement and partner with a lot of Native organizations throughout Anchorage," she said. "We do volunteer work with the First Alaskans Institute, the Cook Inlet Tribal Council, the Alaska Native Tribal Health Consortium, and are partnered with the Dean of Students Office to provide an Annual Reasons to Live march for suicide awareness."

Standifer, like all of the other recipients, has spent her UAA career not only focused on her studies, but also looking for opportunities to engage with the campus community, either through clubs and organizations, or volunteering her time outside of UAA.

"Hopefully, like me, when I first came here, I always try to be helpful for others," Standifer said.

"The one common thread in UAA’s Student Diversity Award recipients? Engagement." is licensed under a Creative Commons Attribution-NonCommercial 4.0 International License. 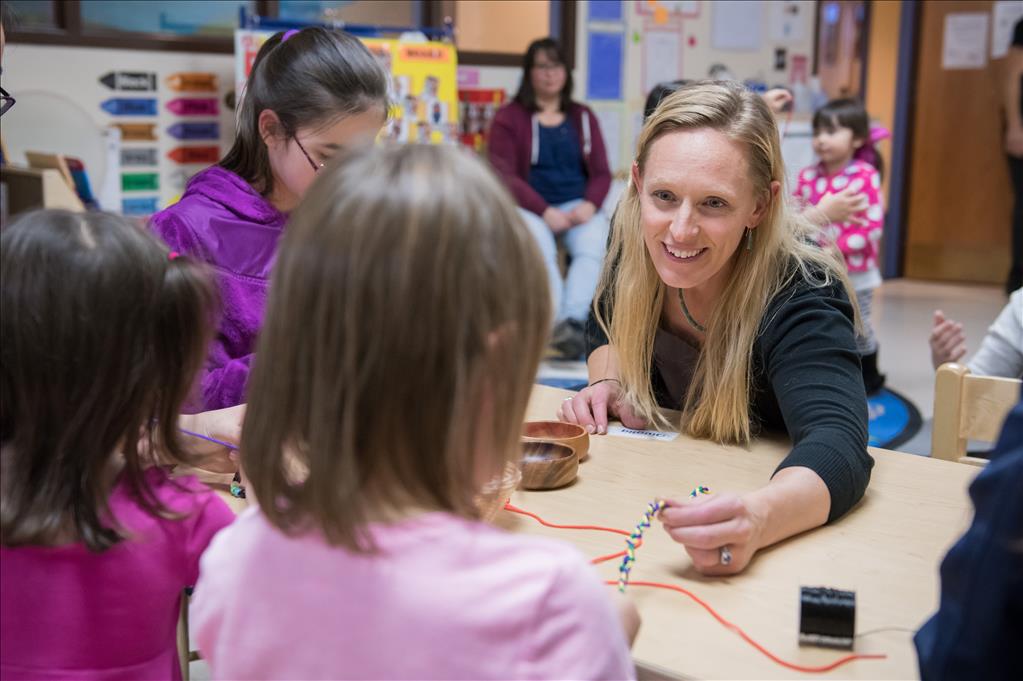 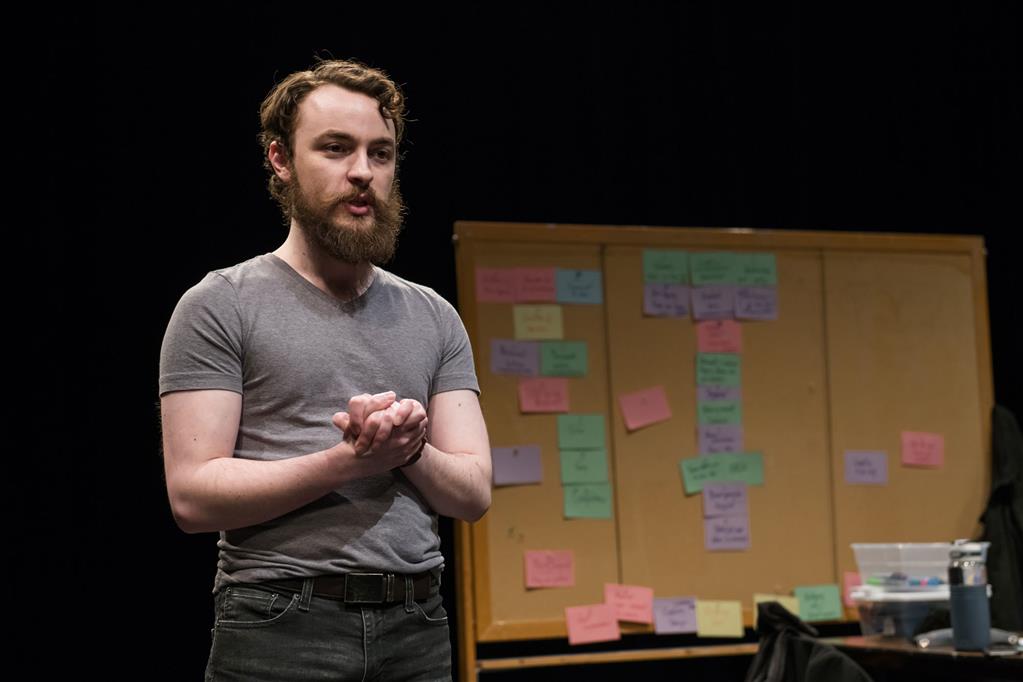 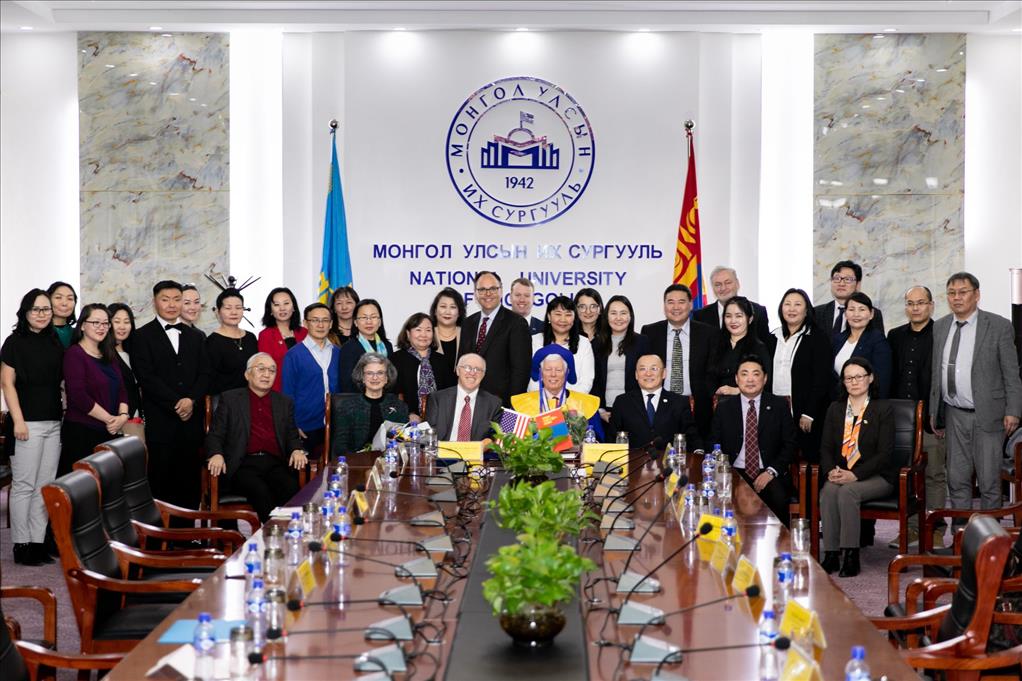 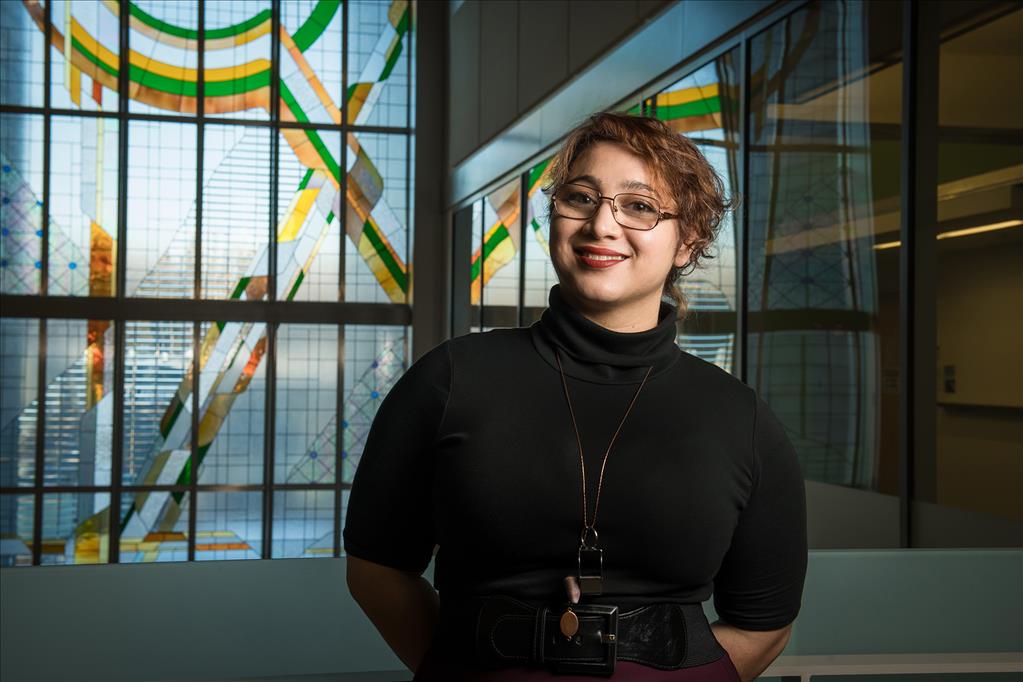 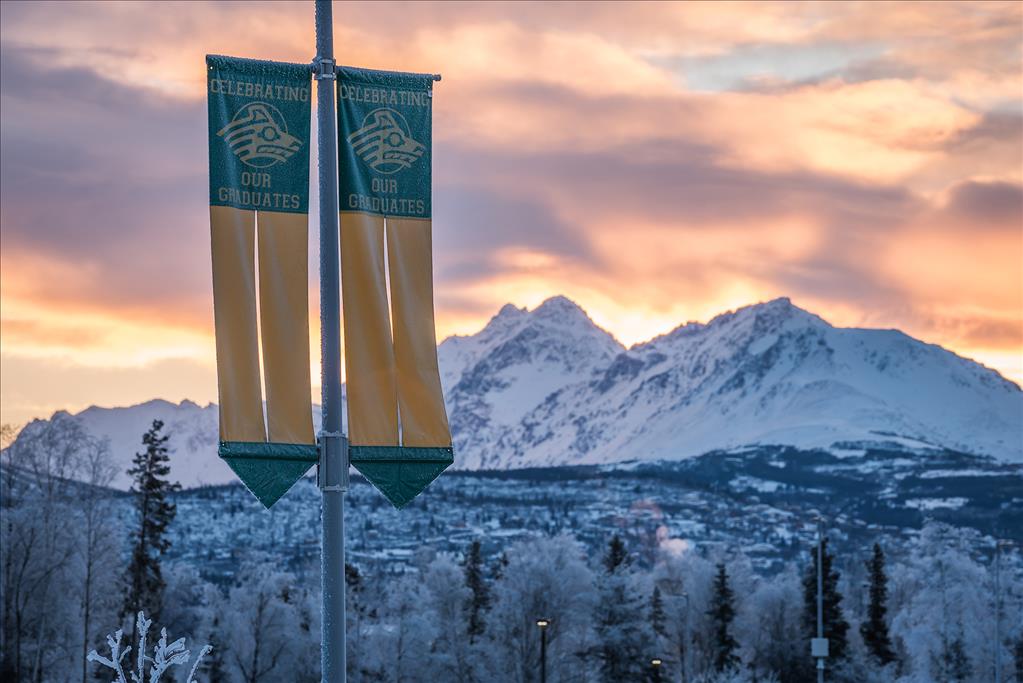