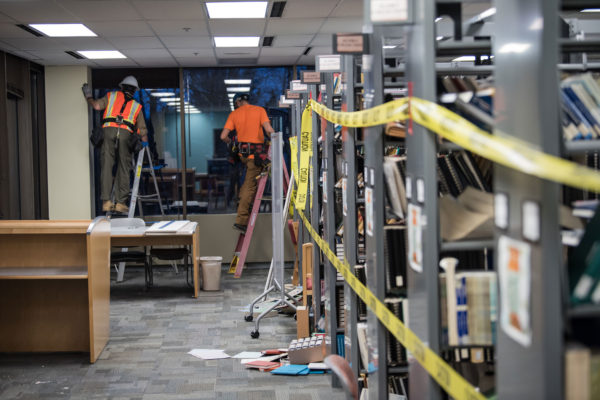 Harmony isn't a word typically associated with 7.1 magnitude earthquakes. And yet, after the ground briefly tried to tear itself apart the morning of Friday, Nov. 30, 2018, Seawolves immediately responded from near and far to work together to pick up the pieces.

"Faced with one of the largest earthquakes in U.S. history, our UAA family proved what they are made of," said Chancellor Cathy Sandeen. "We reopened campus in five days and our students completed their fall studies. Students scheduled to graduate did so on time. Management and facilities teams restored and reopened 70 buildings in less than a week. It's a testament to the commitment of UAA and a wonderful example of Alaska spirit. It makes me proud to be here."

While most of the UAA community received a surprise five-day weekend after the earthquake, Facilities and Campus Services (FCS) sustainability and business manager Ryan Buchholdt, B.B.A. '12, M.B.A. '17, was just getting his day started. 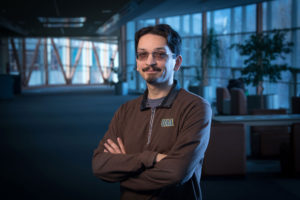 Buchholdt is part of the Incident Management Team (IMT), a diverse group of employees who are trained to mobilize during emergencies. The team's effectiveness lies in its fluidity and ability to respond to constantly shifting priorities, referred to as an incident command approach.

By noon when many were still navigating post-earthquake traffic, Buchholdt and the rest of IMT had set up an Incident Command Post. After FCS staff completed a sweep of campus and it became apparent there were thankfully no health issues, emergency operations became facilities-centric, with Buchholdt assuming the role of incident commander.

"At its core, the incident command approach is defined as management by objectives," said Buchholdt. "Instead of looking at each day, it's about an operational period, however you need to break up the work, prioritize your limited resources and figure out what you need and how to get it. Another interesting thing is it becomes a system where everyone's titles and authority become very specific to what is needed right now, rather than what exists on a normal day."

Due to finals being scheduled the following week, the top priority was getting campus reopened, likely to the detriment of last-minute crammers. In order to stick to the tight timetable, Buchholdt and his internal team of staff and external network of contractors worked through the weekend, early mornings and late nights to clean up, assess and repair each building on campus.

"What was inspiring wasn't so much a system or process, but the dedication of the staff that showed up for the cleanup. And the contractors, they knew the campus and culture enough to be very integral, an extension of the in-house team. In many ways, the reason we were able to open that Wednesday was because of not only the dedicated staff, but also the dedicated contractors that had experience with us," said Buchholdt. 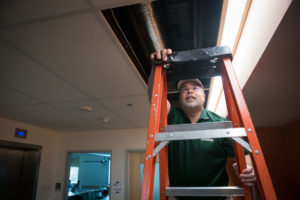 Of all the contractors who offered their services to UAA, Reid Middleton senior structural engineer Mike Fierro, B.S. '89, M.S. '01, is the most familiar with the campus. In addition to his alumni status, Fierro is the designer behind the UAA/APU Consortium Library and ANSEP, Health Sciences, and Engineering and Industry Buildings.

Fierro returned to UAA immediately following the earthquake to help FCS staff conduct rapid screenings of each building, quickly searching for damage and assigning a green, yellow or red tag. Afterward, Fierro designed repairs for the damages he found. Although he describes this as an almost Sisyphean task, as originally unnoticed damages would be discovered or new ones would be created during aftershocks, Fierro was pleased to see how the buildings held up.

"The university buildings range from being built in the '70s to the last few years, and overall they performed pretty well. The newer ones performed outstanding, but I'm biased," joked Fierro.

Off campus, the alumni response was just as strong. Just an hour and a half after the earthquake, Department of Transportation project engineers Mahear Abou Eid, B.S. '09, M.S. '17, and Randy Lenig, B.S. '15, stood above the northbound Minnesota Drive exit ramp looking over the scene of the now-iconic photo depicting a miraculously undamaged GMC Terrain (pun not intended) marooned on the collapsed ramp.

"Amazingly, the GMC didn't get damaged by any of that material. We were able to just backup a tow truck and literally tow it up. One of the chunks of asphalt had fallen perfectly to build a ramp, so we drove it right up on there," said an amused Abou Eid. 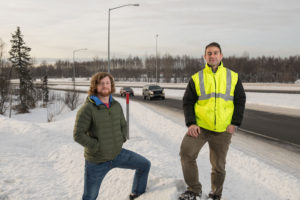 Equally as iconic as the photo is the remarkably short time it took to rebuild the ramp, which Lenig estimates took three days and 4,600 tons of materials. Abou Eid credits the expedient reconstruction to the whole community of engineers and contractors coming together, not to mention uncharacteristically cooperative weather.

"The Anchorage community really came alive. It was impressive what the community, DOT and the contractors were able to pull together," said Abou Eid. "It was just a really well-coordinated effort, and it was the perfect situation as far as weather. If there was snow on the ground, that would've caused a huge pain in trying to figure out what was broken and how to move things."

Talk to enough people who were on the front lines of the earthquake recovery and one thought becomes clear: Anchorage was lucky to sustain as little damage as it did. Part of this was due to the depth and short duration of the earthquake. Originating 27 miles underground, by the time the shaking reached the surface, it had mostly dissipated.

Strong codes and strict enforcement also played a huge part in Anchorage's earthquake resilience. The success of the building codes are even more impressive when you take into account the fact that they were drafted without any scientific data from the 1964 Good Friday earthquake, which UAA associate professor of civil engineering and seismology expert Utpal Dutta, Ph.D., says was due to there not being any sensors in Anchorage at the time.

Since the early 1990s, several seismic stations have been installed around Anchorage in buildings, on bridges and underground. Seven of those stations were installed by Dutta through his establishment of the Anchorage Seismic Network. 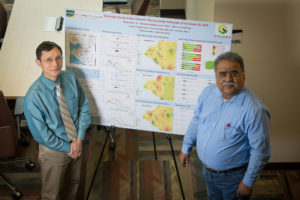 The duo's tangible data paint a scientifically accurate portrait of earthquake activity and ground characteristics around Anchorage. According to Dutta, this information is a valuable resource for city planning. For instance, due to the shrinking amount of available land between the Chugach Mountains,  Knik Arm and Turnagain Arm, taller high-rise apartments will need to be built to accommodate population growth. Knowing how to build on the land and outfit buildings to withstand the next inevitable earthquake is paramount.

"Being able to understand the ground response is going to help plan the city - where you should not build high-rise buildings, schools or hospitals," added Yang. "We learned that certain areas of the town are definitely more susceptible to liquefaction and ground failure. So how do we make sure those properties will not sustain damage as some have during this event?"

Currently, the United States Geological Survey and other scientific bodies are analyzing the data collected by responders and researchers. More data is expected to come to light throughout the year as the weather warms and the ground thaws, possibly uncovering delayed damage.

"Based on my discussions, there hasn't been a huge revelation of anything the building code missed, which is good. For instance, lots of code changed after the 1994 Northridge earthquake in Southern California. Fortunately for Anchorage, many of the buildings were built post-'90s, so there's no smoking gun yet," said Hamel.

What about buildings built before the '90s? According to UAA associate professor of structural and earthquake engineering and concrete specialist Wael Hassan, Ph.D., there's still a lot of them around Anchorage, and the codes during their construction weren't as strong.

"Damage from the 1964 earthquake triggered an interest in developing seismic building codes," said Hassan. "Until the 1980s, knowledge was lacking everywhere. We didn't have the seismic details to design sufficient materials to take earthquake load. The first buildings in California that were designed to be earthquake resistant went up in the early 1980s and Alaska followed."

Hassan cautions against lulling into a false sense of security because no buildings collapsed, citing the earthquake's shallow depth and short duration as the reason the city's older buildings remained largely unscathed. Using the recent earthquake as a springboard, Hassan hopes to lead the charge and convince policymakers to retrofit Anchorage's older, more vulnerable buildings, which is a movement he's had previous success with in California.

"Most fatalities during major earthquakes come from non-ducted concrete buildings, so they're also known as killer buildings, and Anchorage has a lot of them," said Hassan. "L.A. enforced the seismic retrofit of all non-ducted concrete buildings based on our research. Many other cities are following that impact, and I'm hoping to do that here. That's why we need to work hard on promoting, advancing and assessing the seismic safety of infrastructure in Alaska."

"Shaken into action" is licensed under a Creative Commons Attribution-NonCommercial 4.0 International License.