University of Alaska Anchorage campus will be closed September 24, 2021 beginning at 6:40 AM, due to weather. Check your email for more information. 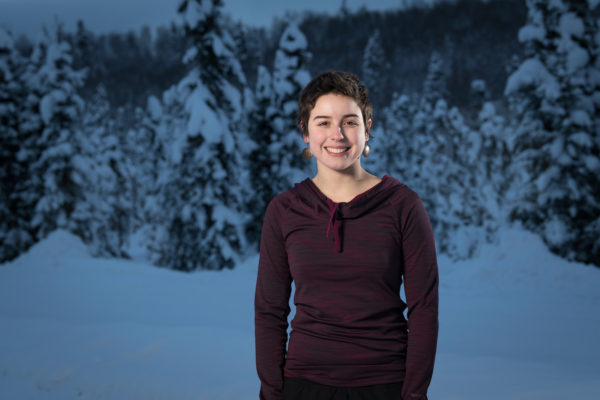 Kristal Perez, a senior International Studies major, with a concentration in the Global South, was awarded the Benjamin A. Gilman International Scholarship, and has spent the last four months exploring and studying in Costa Rica. (Photo by James Evans / University of Alaska Anchorage)

For Kristal Perez, a junior International Studies major with a concentration in the Global South, the similarities between her homeland of Puerto Rico and Anchorage, Alaska, are surprisingly similar. Most notably, she says is the diversity. She says the city's diverse people, language and culture make her feel like she's at home.

Arriving in 2016, she recalls being a shy and timid freshman who spent most of her first year at UAA familiarizing herself with campus and getting to know the people who could help her transition smoothly to her new Alaska home and university. Despite her shyness, Kristal said she had a list of goals and a plan of action she wanted to accomplish during her college years.

"My first year, I got to know the campus and its resources because I didn't have a mentor and the language was a bit of a barrier, and I had no friends," Perez said. Her freshman year was tough and she often felt lonely, but she says she's glad she stuck it out because life got a lot more fun once she engaged with campus clubs and activities. "My goal my second year was to get connected. So I got a job, an apartment and joined clubs, and then my third year, my goal was to study abroad."

It's a dream she's had since she was a little girl and knew even when she was very young, that traveling was something that was important to her. Fast forward to 2018, and Kristal was awarded the Benjamin A. Gilman International Scholarship, a program designed to help students with financial constraints to have a study abroad experience. Since early January 2019, Kristal has spent her time living, traveling and exploring tropical Costa Rica, while studying at Veritas University and working as an intern in the university's marketing department. She was there through May 5, and flew back north to Anchorage briefly before jetting off to Cuba for the second stage of her study abroad journey. 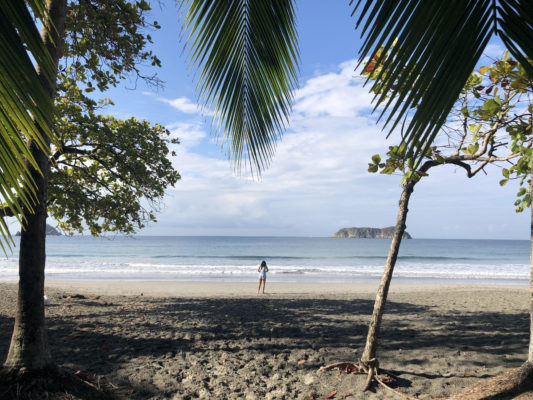 Kristal's first month in Costa Rica was an immersive travel experience where she learned about the people, culture, food and, of course, explored the local beaches. (Photo courtesy of Kristal Perez)

When picking accommodations for the trip, Kristal had the option to work with an agency within Veritas University that helps facilitate excursions and cultural experiences for both local and study abroad students, or to do these types of activities independently. She chose to work with the agency, which covered her food, transportation and the opportunity to explore her new surroundings in the safety of a group and to make new friends.

"Basically the first month, I got to go to waterfalls, beaches, museums and volcanoes," she said. "They wanted us to get to know the region and the culture. We were taken to restaurants where we got to try local foods, that was pretty nice."

The agency provided Kristal and her study abroad peers a whirlwind immersive experience of the food, culture, people and landscapes in their new home away from home. 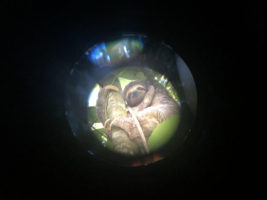 Checking out the local wildlife. (Photo courtesy of Kristal Perez)

After spending the first month being immersed in Costa Rica culture, Kristal began her classes. For her, the language classes were smooth sailing, since she is already fluent in Spanish, but her courses in Latin and Costa Rica history were fascinating and unveiled a new aspect of her Latina culture she was not previously well-versed in.

"A lot of people asked me, 'Why are you going to a Spanish-speaking country when you already know the language?'" said Kristal laughing, but she said as an international studies major, the small nuanced differences between Puerto Rican and Costa Rican cultures are what interest her.

The second month of the program, she began her classes at Veritas University and the study abroad agency she was was working with gave her and her cohort more freedom to explore and take trips on their own. 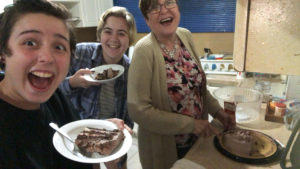 Perez enjoying a celebratory birthday for her host mom in her host family's home. (Photo courtesy of Kristal Perez)

"We had to be independent and schedule our own adventures and figure out where to go," she said. "We met friends - local friends - and ones from the program. We were encouraged to make connections."

She also got to know her host family, who have been amazing hosts, she said. They provide her and the two other exchange students from the program with great food, are a wealth of knowledge for travel tips for the weekends and have made them feel at home.

She said she and her roommates have gotten close, and for the first month, she was the interpreter, helping the two other students communicate with the host family and when they went out in the community or on trips.

"I work in the adventure office," said Kristal of her new internship. Which is the same office that provided her with the "all things Costa Rica" experience when she arrived in January. "We give them the opportunity to go on adventures and also coordinate educational trips as well."

Kristal said she is helping the coordinator improve and expand the program by creating marketing materials, tracking analytics on how many students use their office resources and what types of adventure experiences they gravitate to, as well as helping with day-to-day fiscal tasks like tracking invoices. She said it's not really her degree field, but she's learning a lot and is enjoying her work.

Even though Kristal is having the time of her life and enjoying her study abroad program, it hasn't been without some challenges and some that took her by surprise. 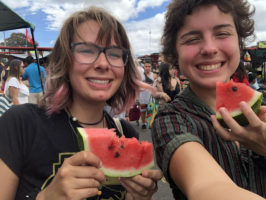 Taking advantage of the local farmers markets with a friend from the program. (Photo courtesy of Kristal Perez)

"The difference between traveling for a long period of time and a short period of time is huge," she said. "Patrick, our study abroad coordinator, showed us this chart where these waves and he said 'You're going to be on the top peak the first month, but then you're going to be two or three weeks downhill.' And I truly experienced that.

Kristal said it surprised her because she thought it would be the same as when she first traveled to Alaska from Puerto Rico some three and a half years ago. But her study abroad experience was completely different, here in this new country she was totally alone with no support system. She said it was difficult the first month or so, but luckily family from Puerto Rico visited her and she's been on the upswing ever since.

So far, it's been a great trip. She's been busy trying to squeeze in adventures after school and on the weekends. She has a little less than a month left and is amazed at how fast the time has gone.

"I think if you want to do it [study abroad] you have to declare it and say that you're going to do it, even if you're not sure how," said Kristal.