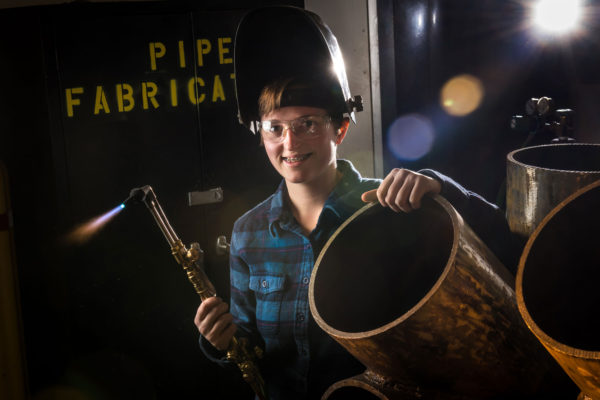 Tia Thompson is experiencing a bit of a hot streak. After a historic victory at the recent 35 annual Student Showcase, she earned her associate of applied science in welding and nondestructive testing technology. And only one week after graduating, she began putting her degree to the test with a new job at Kakivik Asset Management. (Photo by James Evans / University of Alaska Anchorage)

Few career paths are seemingly as future-proof as welding. While many industries continue to suffer from automation, oversaturation or globalization, the Bureau of Labor Statistics expects the employment of welders in the U.S. to grow 6% by 2026. Despite the positive outlook, actually filling those positions has proven to be a challenge for nearly a decade. To help fill the gap, welding organizations and employers began an effort to target women for those vacancies. Early efforts focused on recruiting women by emphasizing the industry's high pay and job stability, and by establishing scholarships and mentorship programs.

It's unclear if those efforts actually increased the number of women pursuing an education and career in welding. A report in The Atlantic states that women made up just 4% of welding workers in the U.S. in 2016, unchanged from the percentage in 2010. But apparently, recent UAA welding alumna Tia Thompson didn't get the memo. 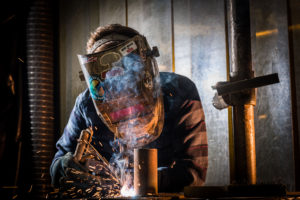 Even with recent efforts to attract women into the trades, women still only account for 4% of the welding industry in the U.S., according to the Bureau of Labor Statistics. (Photo by James Evans / University of Alaska Anchorage)

Thompson grew up with a broad overview of the trades. Born in Kentucky and raised in King Salmon, she describes not having much to do except for playing sports and assisting her diesel mechanic older brother in the garage. In high school, Thompson started to hone in on welding as a passion after a Career Technical Education (CTE) course introduced her to the craft.

"My older brother was always in the garage fixing stuff. I was always in the garage helping him, so I grew up his little mechanic helper. So at a young age, I had a lot of appreciation for working with your hands and for trade skills," recalls Thompson. "Then in high school, every year for one week in the fall and one week in the spring, they would do CTE programs and would teach trade jobs like small engine repair or heavy equipment operation. I did the welding one my senior year, which was perfect timing because it was right before college and it really sparked my interest."

After graduating from Bristol Bay High School in 2016, Thompson planned to follow her brother into the Alaska Vocational Technical Center (AVTEC) in Seward. Unfortunately, the wait list to enroll was longer than she would've preferred.

"I didn't want to wait and lose motivation because I was afraid that would happen," shares Thompson. "My original plan was to go to AVTEC, but there was such a long waiting list. Then I saw that UAA had a welding program - I had no idea! So I went here and I'm really happy that I did. The instructors here are amazing and it's a really solid program."

All of Thompson's experiences in the trades culminated at the recent 35th Student Showcase - an annual celebration of the work done at UAA by undergraduate, graduate and middle college students. Thompson submitted a TKY joint constructed using three 8-inch diameter pipes. According to her, a TKY joint is a type of pipe fabrication that is common in bridge construction, the legs of offshore drilling platforms, towers and other structural applications. 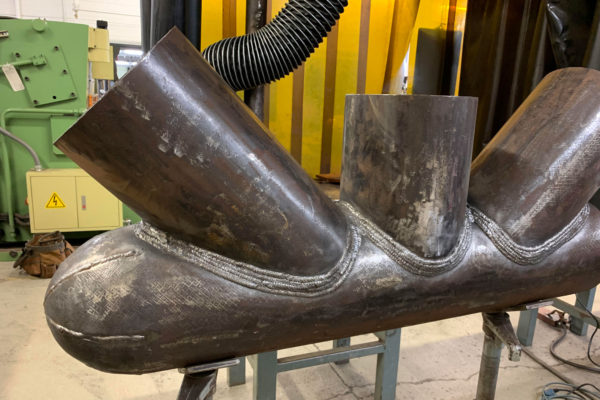 Thompson's TKY joint was one of eight winners at the 35th Student Showcase. Her submission was constructed using three 8-inch diameter pipes. TKY joints are a type of pipe fabrication that is common in bridges, towers, offshore drilling platforms and other structural applications. (Photo courtesy of Tia Thompson)

Out of 40 applicants, 23 were invited to present their submission. From those 23 presenters, eight were crowned winners, and one of them was Thompson. While her win is already impressive, it's even more so given that her submission was the first one in 20 years from the Community and Technical College, which houses UAA's welding and other trade programs.

"One of the parts of my presentation where I noticed the judges and the crowd be like, 'Wow, that's really cool,' was I was able to walk across campus one day and I took pictures of TKY joints that were here and was able to show them," describes Thompson. "They asked why we learn this in welding, and if you look at the UAA campus, it's filled with TKY joints. So the people that built this university built it using the exact same methods I'm learning in class. I think that's what got the judges."

Thompson quickly followed up her Student Showcase victory by earning her associate of applied science in welding and nondestructive testing (NDT) technology. NDT is the method used to inspect the integrity of a weld without having to break anything. 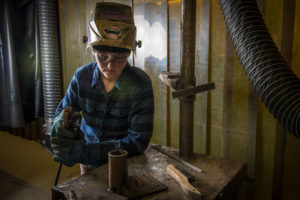 Thompson's new position at Kakivik has her training with radiographic testing, one of the four NDT methods she covered while at UAA. (Photo by James Evans / University of Alaska Anchorage)

True to form, Thompson isn't taking things easy before making her next step. One week after graduating, she began a full-time position with Kakivik Asset Management, working on the North Slope and putting her education to the test as a radiographic testing trainee.

One of the four methods of NDT taught at UAA, radiographic testing involves the use of X-ray imaging to identify discontinuities in a weld. The remaining methods are ultrasonic testing, which uses sound waves to look through metal the same way it's used to look for a baby; magnetic particle testing, where a weld is magnetized and iron particles are used find breaks in the magnetic field; and penetrant testing, which uses dye to seep into and reveal any cracks.

Despite all her training, Thompson explains that with continuous advancements made in the four methods she did learn - as well as all the ones not yet covered at UAA - she's barely scratched the surface of NDT. Unsurprisingly, she's already looking forward to learning more after her contract with Kakivik ends this September.

"I'm really looking forward to having more exposure into the nondestructive testing field," says Thompson. "Other than the processes and the methods, there's just some things you don't learn in a classroom, right?" 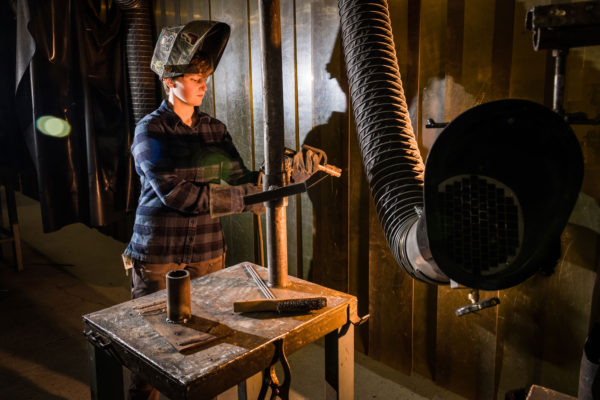