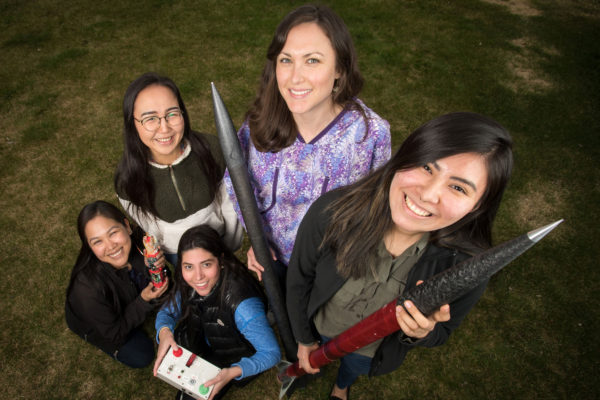 Continuing this grand tradition is an all-women team of engineers from UAA who are working to build a rocket capable of exceeding the speed of sound for the annual Space Grant Midwest High-Power Rocket Competition, aka the Efficient Supersonic Rocket Challenge. 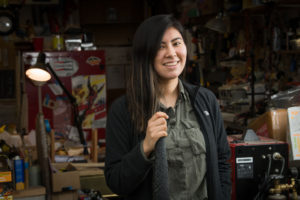 Jimmie is a mechanical engineering major from Northway, Alaska. She co-founded the team and serves as the group's project manager. (Photo by James Evans / University of Alaska Anchorage)

Backed by the Alaska Native Science and Engineering Program, the team of six also have the help of three mentors, including David Erickson with the National Association of Rocketry and Tripoli Rocketry Association. In addition to supplying his years of expertise, he's also providing the garage where the team works.

"The competition is not just build and fly a rocket. It involves engineering processes and multiple other facets as well," says Erickson. "Public relations, outreach, logistics, project management, fundraising - all of those things come together for this competition. The main reason NASA sponsors these competitions is to introduce their process and way of life to their future workforce." 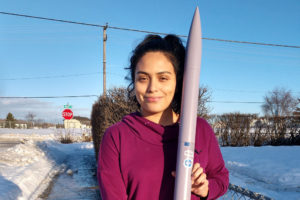 Helen Segura is a mechanical engineering major from Southern California. She co-founded the team and serves as the group's mechanics lead. (Photo courtesy of Helen Segura)

While everyone on the team partakes in the responsibilities described by Erickson, those facets are most felt by Trisha Jimmie. A mechanical engineering major from Northway, Alaska, Jimmie co-founded the team as a way to put what she was learning in class into practice. Additionally, Jimmie hoped to exercise leadership experience, so she took on the role of project manager, making sure the rest of the team was hitting each deadline during the 9-month competition.

"Recently I wanted to go into a leadership type of role. It was new to me, but I think I've gotten used to it," says Jimmie. "I've mostly been reaching out to the media and keeping everyone in the team communicating. It feels like it's my responsibility how the progress of the project goes."

The team's second founder is Helen Segura, a mechanical engineering major from Southern California. Segura explains the group's structure as divided in two halves. The first half is the mechanics side, which she leads. In her position, Segura is in charge of designing the rocket and its testing apparatuses, which she describes as an incredibly satisfying experience. 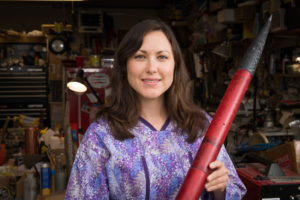 Rachelle Griffitts is a civil engineering major from Ekwok, Alaska, and the team's safety officer. (Photo by James Evans / University of Alaska Anchorage)

"When you come up with ideas of what you want to do and to see it happen and know that you actually built it and it works is so rewarding," says Segura.

Also on the mechanics side is Rachelle Griffitts, a civil engineering major from Ekwok, Alaska, and the team's safety officer, and Temyka Ayuluk, a mechanical engineering major from Chefornak, Alaska, and the member handling rocket assembly. Ayuluk is also the only person in the group who's been on other rocketry teams in the past. But according to her, no other team she's worked with has the same level or organization and communication as her current one.

"Everything just clicks. We vibe so well with each other," says Ayuluk. 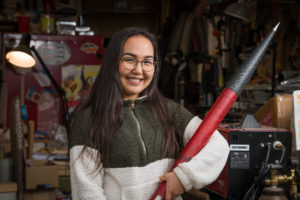 The second half of the rocketry team specializes in avionics, which describes any electronic or computer system utilized in an aircraft. On this side is the team's avionics lead, Danica Mike, an electrical engineering major from Kotlik, Alaska. Mike oversees which computer parts to order and how those parts are integrated into the rocket.

Also on the avionics side is Monica Heim, a computer science major from Monterrey, Mexico, and the team's coder. It's her job to program the rocket's computers to control any number of variables, including altitude, longitude, velocity, acceleration and temperature. 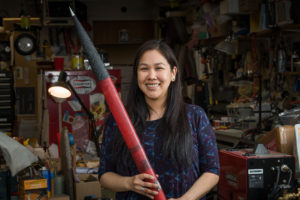 Danica Mike is an electrical engineering major from Kotlik, Alaska, and is the team's avionics lead. (Photo by James Evans / University of Alaska Anchorage)

"Imagine a body without a brain. So in this case, the brain is the software. The rocket can be perfect on the outside. But if it doesn't do what you want it to, it's just going to be standing there," says Heim.

Time and time again since September, the team has gone through the rigorous process of calculating and running simulations, ordering or 3D printing parts, constructing rockets, and finally testing them in Big Lake. Not only did the team do this for their main competition rocket, but several smaller rockets along the way.

One of the team's biggest milestones happened in March when four of the six members achieved Level 1 High Power Rocketry Certification. Rockets are categorized into different levels depending on motor size and travel speed. The main rocket for the competition uses a Level 2 supersonic motor. 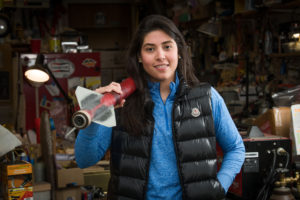 Monica Heim is a computer science major from Monterrey, Mexico, and is the team's coder. (Photo by James Evans / University of Alaska Anchorage)

While it may seem counterproductive to build an optional, smaller, slower rocket before the main event, the certification helped the team get a crash course on rocket construction. Level 1 Certification also freed up the team to order a wider range of rocket parts without the supervision of their mentor.

"Level 1 is optional, but it helped us realize what we're getting into and is a good way of showing the judges that we went the extra step," says Mike.

Nine months of hard work will culminate this weekend when the team travels to North Branch, Minnesota, to launch their final rocket. While the group is confident in the rocket's performance, it's hard to deny that they're already winners.

"[This competition] has made us more confident as engineers and is giving us valuable job experience that we can take with us later on in life," says Griffitts. "The big message with what we're going is we want to encourage young people and women and people who think they might not be able to do things like this that they can do anything they put their mind to and to not let anything get in the way of their dreams. Just go after it." 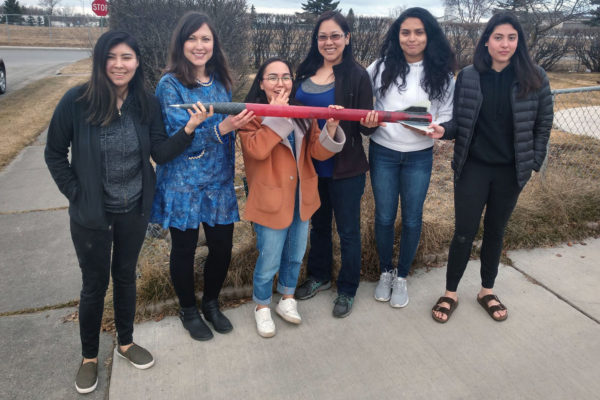